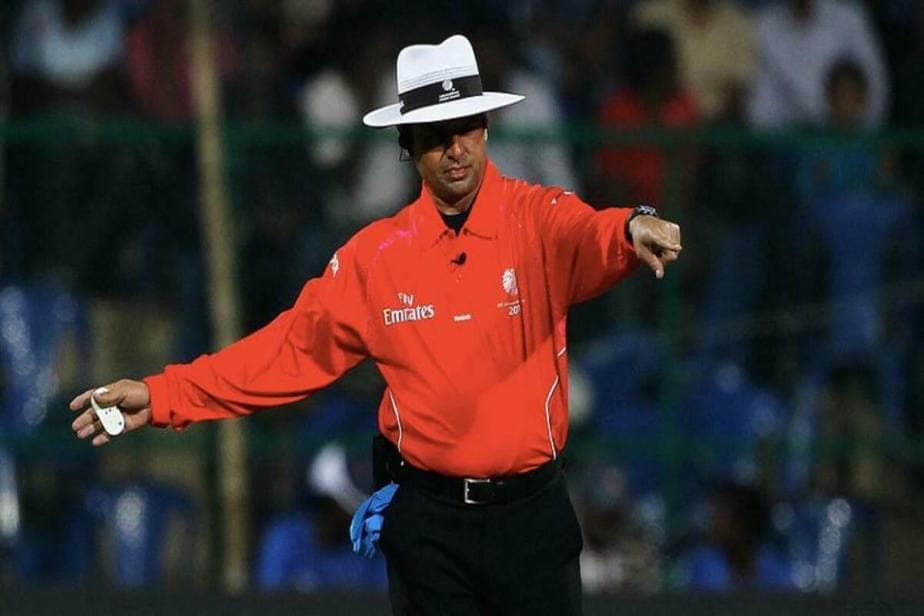 Umpire Aleem Dar, who was at the bowler’s end in the culminating over, didn’t agree for the LBW appeal by the Kings.

In the sixth match of the ongoing Pakistan Super League (PSL) 2021, Islamabad United defeated Karachi Kings by five wickets. However, the thrilling T20 match was not bereft of usual shenanigans of the game, as Karachi decided to delay the proceedings by going for an LBW review in the final over the match.

Umpire Aleem Dar, who was at the bowler’s end in the culminating over, didn’t agree for the LBW appeal by the Kings. However, they went ahead with a review upstairs, but had to bite the dust as the replay clearly showed that there was a bat involved, hence the initial appeal didn’t stand ground.

As the third umpire’s decision showed ‘Not Out’, the veteran umpire couldn’t hide his excitement and marked it with a mini celebration on the field. A fan shared a clip of the umpire’s reaction on Twitter and it has been the talk of the town ever since.

Aleem Dar reaction at the end of Match when Karachi kings lost the review against his decision😍#KKvsIU #psl6 pic.twitter.com/G0n4CNnLci

Dar, a well-respected umpire in the international and domestic cricket circuits, has now left PSL to officiate international fixtures. He will return in the second round of the league.

Earlier in the match, the Karachi Kings were asked to bat first after they lost the toss. Sharjeel Khan’s blistering 105 off 59, skipper Babar Azam’s 62 from 59 balls and Dan Christian’s 12 from five deliveries propelled them to a record 196 run in total.

In the chase, the Imad Wasim-led Islamabad United rode on a good team effort as almost every batsman chipped in to secure a thrilling win. Their opener Alex Hales gave a good start by scoring 46 off 21 balls. In the following overs, they lost two quick wickets but remained in the hunt as their rest of the batting line-up played their parts in the successful chase. In the end, they needed just one run in the final over and United completed the chase with a single.

The win gave Islamabad United their second consecutive win in the league, while Karachi Kings now have one win and a defeat from two matches. They will next lock horns with Multan Sultans, while Islamabad United will take on Peshawar Zalmi.