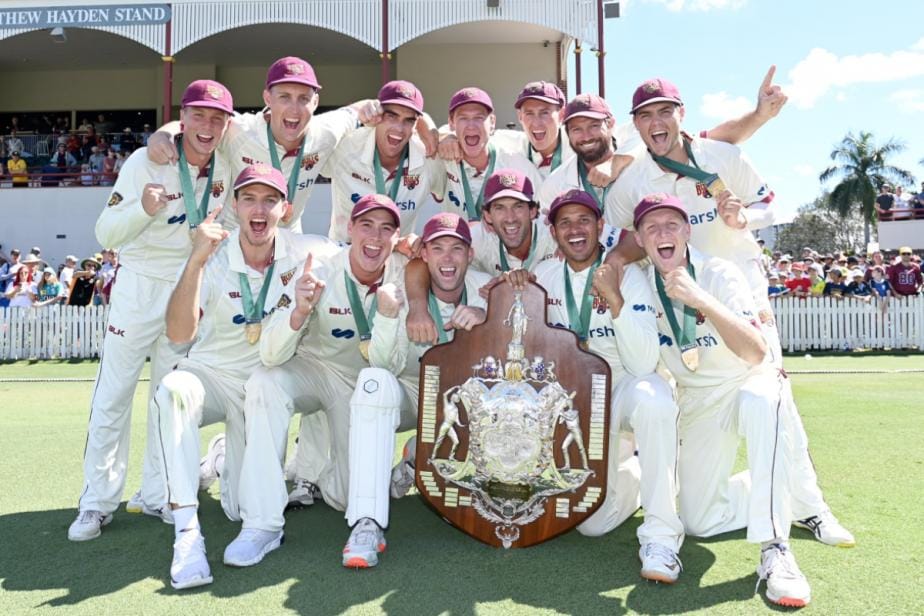 On the fourth morning of their Sheffield Shield decider against New South Wales, Queensland stormed to a an innings and 33 run-win for their ninth title at the Allan Border Field on Sunday. Defending champions NSW folded for 213 in their second dig with the trio of Brendan Doggett, Xavier Bartlett and Michell Swepson taking three wickets each while Michael Neser claimed one.

The Bulls completed their win before lunch with Doggett taking the final wicket to fall when he had Josh Hazlewood out caught-behind for 3. The Usman Khawaja-led outfit were dominant from Day 1 of the five-day contest when NSW won the toss and opted to bat first.

Neser took a five-wicket haul to bowl out NSW for 143 on the opening day itself. In response, Queensland made 389-all out with Marnus Labuschagne, the player of the match, top-scoring with 192 off 352.

NSW resumed their second innings on 140/5 on Sunday morning, still trailing by 106 runs.  But they lost overnight batter Sean Abbott (22 off 35) to Neser for the addition of just  two runs to their overall total.

Baxter Holt was next to depart but Mitchell Starc continued to offer resistance and remained unbeaten on 27 off 125 even as he ran out of partners.

Khawaja was all praise for his teammates. “We’ve got an excellent dynamic (in the team),” Khawaja said. “We love spending time with each other, so this is beautiful. It wasn’t a very easy wicket on the first day, it was hard to drive, but you still have to execute, and our bowlers did it beautifully.

“They did exactly what I asked of them and it put plenty of pressure on the Blues boys. In a Shield final, you can’t ask for much more in the first hour, the first session, the first day,” he added.