Ranji final: Rajasthan 221 for no loss 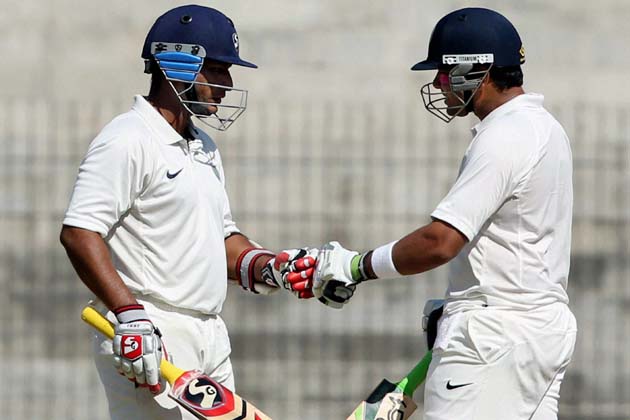 Chennai: It was one-way traffic at the MA Chidambaram Stadium, as Rajasthan openers Aakash Chopra and Vineet Saxena carried the defending champions to 221 for no loss at stumps on day one of the 2011-12 Ranji Trophy final.

You can't blame Tamil Nadu for having a sense of déjà vu. The same pair had been instrumental in Rajasthan posting a huge total in last season's semi-final against Tamil Nadu, posting an 181-run opening stand. Chopra and Saxena were at it again, batting with caution to see out three sessions in staunch manner while recording the highest partnership for Rajasthan versus Tamil Nadu in Ranji history.

Tamil Nadu, whose bowling has been a steady factor in their ascendance to the Ranji Trophy final, failed to apply the required pressure on the Rajasthan openers. This wasn't a surface for flair. It was a grafter's wicket, which suited Chopra and Saxena. They nudged and pushed the ball into the gaps while shunning the booming drives. The pair opted for caution instead of aggression; 89 runs came in the morning session, 65 in the second, and 67 in the final passage.

Seventeen runs were conceded by Tamil Nadu skipper L Balaji in the first over of the match, and that set the tone for the morning session. The first ball was clipped by Chopra for four to square leg, the third similarly dispatched, and Saxena opened his account by driving his first delivery to the long-off boundary.

Chopra had to receive medical attention after being struck between the grill of his helmet after a miscued hook shot against seamer Jagannathan Kaushik in the sixth over. He resumed his patient innings after the incident and was impressive in his driving off the front foot down the ground and into the off side.

Saxena was more aggressive, and looked to latch onto anything loose from the spinners. The 50-run stand came up in the 21st over with a single off left-arm spinner Aushik Srinivas, and Saxena brought up his 50 with a couple off Sunny Gupta's part-time offspin in the 33rd over.

With the bowlers finding no assistance from the placid track in humid conditions, Tamil Nadu struggled to apply pressure. Boundaries were not common but Chopra and Saxena rotated the strike well and put away the bad deliveries. Saxena slowed down post lunch but did not waver in concentration. His cutting was the most pleasing aspect of his innings, and he handled the spinners with confidence after some initial hesitancy.

Srinivas and Balaji bowled a testing spell in the afternoon. Srinivas beat the bat several times and Balaji achieved significant reverse swing to force the batsmen into some nervous shots, but overall the bowling lacked bite. On 47, Chopra offered short leg a chance when he turned Srinivas off his pads, but the catcher could not take it. Chopra brought up fifty off 168 balls with a lovely offdrive for four off seamer Yo Mahesh, and immediately went back to defending.

Balaji – who took the field after going off for treatment on a cut to his hand attempting to stop the boundary that brought Chopra his fifty – plugged away but had little impact on a surface lacking any bounce. With each over gone, Chopra and Saxena numbed Tamil Nadu. Chopra's footwork against the spinners improved, and he cut and pulled boundaries before tea.

Shortly after the second new ball was taken, Saxena raised three figures off 237 deliveries with a clip for four off Balaji. His roar emanated across the cavernous but empty stadium, while in the pavilion his team-mates cheered raucously. At the close of play Saxena was unbeaten on 120, with Chopra looking solid on 86.