Sachin Tendulkar scored his 80th first-class century for Mumbai to help his team post 272 for 3 against Baroda. 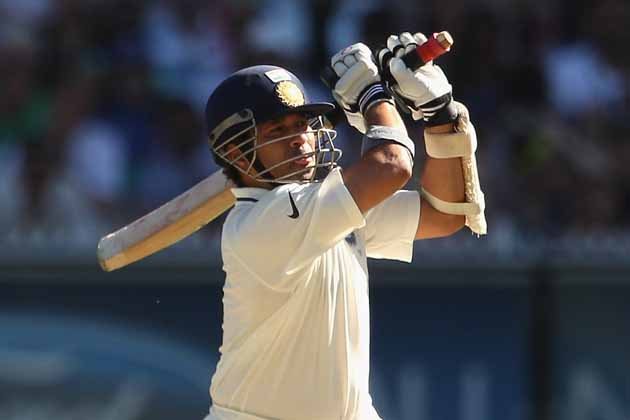 Mumbai: Sachin Tendulkar scored his 80th first-class century for Mumbai to help his team post 272 for 3 on day one of their Ranji Trophy quarter-final clash against Baroda at the Wankhede Stadium here on Sunday.

He was well-supported by opener Wasim Jaffer (137*), who scored his second consecutive century, having hit 171 against Gujarat in their last league game. Tendulkar and Jaffer lifted Mumbai from 35 for 2 at one stage to a 270-plus total by the end of day's play, after putting on a 234-run stand for the third wicket.

Tendulkar, who recently retired from one-day international cricket, looked in sublime form as he notched up his 18th Ranji century. From word go, the veteran was playing his shots. He hit a six off Ketul Patel to bring up the fifty, while his century came off an Ambati Rayudu over as he ran hard for two runs.

Playing his 35th Ranji match for Mumbai, Tendulkar spent 296 minutes at the crease for a well-made 108 that came off 233 balls, and was studded with 10 hits to the fence and a six. He was castled by Baroda pacer Murtuza Vahora, four overs prior to the end of day's play.

This was Tendulkar's second ton of the season. He had hit 137 against Railways in a league match in November last year. He is now one short of the Indian record held by Sunil Gavaskar, who has 81 first-class hundreds to his name. In Ranji Trophy, Gavaskar had scored 20 centuries.

After electing to bat, Mumbai lost opener Kaustubh Pawar (8) and one-down batsman Hiken Shah (9) cheaply. But Tendulkar and Jaffer managed to consolidate the innings, and although the latter was lucky to get a life when he was dropped at slip by skipper Yusuf Pathan on 96, he played a responsible knock and would look to score some more runs on Monday.

The Baroda bowlers struggled after picking up two early wickets even as Yusuf used as many as seven bowlers to get a breakthrough. At stumps, Jaffer was unbeaten on 137 off 256 balls. His knock was laced with 16 fours and three sixes. Giving him company on the other end was Dhawal Kulkarni, who is yet to open his account.

For Baroda, Vahora chipped in with two wickets for 50 runs in 23 overs.