The MP captain scored his second century of the match; in Bhubaneshwar Karan Sharma picked up 8 for 97 to bowl Railways to victory over Rajasthan; Mumbai took three points over Saurashtra. 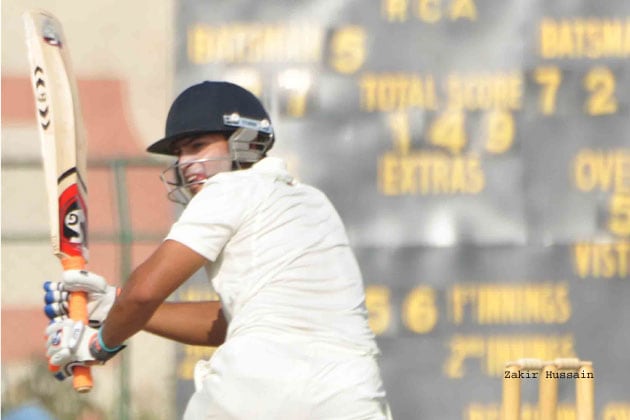 Gwalior: It needed something dramatic to stop Punjab's amazing unbeaten run in the 2013-13 Ranji Trophy season, and that is precisely what Madhya Pradesh captain Devendra Bundela produced on Tuesday to lead his team to an eight-wicket win over the best team in the tournament. Set a target of 190, MP slipped to 8 for 2 before a partnership of 185 between Bundela, who collected his second century of the match, and opener Jalaj Saxena sealed victory in Gwalior.

From an overnight 277 for 6, Punjab extended their lead to 189 which set MP a target of 190. Their chase began poorly as pace bowler Sandeep Sharma reduced them to 8 for 2. Naman Ojha (0) was caught behind off the fifth ball of the innings and in Sandeep's third over Anand Rajan – oddly promoted to No. 3 – was lbw for 6. That brought to the crease Bundela, who made 108 in MP's first innings, and with Saxena he set his team on the road to a big win. Bundela finished unbeaten on 100 off 132 balls, having hit 11 fours and five sixes, while Saxena was 72 not out from 120, with eight fours and a couple sixes.

After four outright wins in six matches, and two first-innings leads in the other two, Punjab were handed their first loss of the season. They remain on top of the group 32 points. MP have moved up to places to second place with 20.

In Bhubaneshwar, hosts Railways picked up their first victory of the 2012-13 season with an innings win over defending champions Rajasthan on Tuesday, with legspinner Karan Sharma spinning a web around the visitors with 8 for 97. The innings-and-12-run victory moved Railways up to fifth place on the Group A points table, while for Rajasthan this third defeat virtually shut the door on their season; they remain at the bottom of the pile with five points from six matches.

Having been shot out for 135 in reply to Railways' 405, Rajasthan reached stumps on day three still 117 runs away from an innings defeat. The overnight batsmen, Robin Bist and Ashok Menaria, converted their starts into half-centuries but failed to get big innings as Sharma sparked two collapses. Menaria (56) was the first wicket to fall, caught and bowled by Sharma, and two runs later Rashmi Ranjan Parida was scalped by Sharma for a 12-ball 0. Sharma’s fourth wicket – he had dismissed Rajasthan captain Vineet Sharma on day three – meant the opposition had slipped from 185 for 2 to 199 for 5.

After a brief resistance, Anureet Singh removed wicketkeeper Dishant Yagnik to trigger Rajasthan's second and most dramatic collapse. Sharma collected his fifth wicket by bowling Gajendra Singh for a duck and ran through the lower order to finish with a career-best eight-wicket haul. Bist (68) was the top-scorer and eighth wicket to fall as Rajasthan lost their last five wickets for nine runs.

In Rajkot, Mumbai took three points from a draw with Saurashtra after they bowled the home team out for 300 and then opted for batting practice, with Wasim Jaffer and Rohit Sharma scoring 71 each. Saurashtra moved from 248 for 8 to their eventual score thanks to a maiden century from Aarpit Vasavada (111*) and a stubborn from Jaydev Unadkat.

Unadkat's career-best effort was ended by Dhawal Kulkarni in the 132nd over, and four balls later the innings finished when Siddharth Trivedi fell for a duck. Trivedi soon dished out some of his own with the new ball, reducing Mumbai to 31 for 2 with the wickets of Hiken Shah (0) and Ajinkya Rahane (6). But Jaffer steadied the innings with a patient knock while Rohit scored his runs at a strike-rate of 109.33. Rohit was last out, bowled by Kamlesh Mavkana, when play was called off.