Ritika’s latest Instagram Stories reveal an adorable selfie with the Hitman himself. The duo seems to be having a good time together during this much-deserved break.

Members of Team India are currently on a 20-day break in the UK. After the World Test Championship final, the squad was granted some time off outside the bio-bubble, ahead of the five-match Test series against England. Many of the players have been regularly updating their social media pages featuring snippets that show how they are spending time with their loved ones. Among them is also India’s star opener, Rohit Sharma, who is busy making memories with his beautiful wife, Ritika Sajdeh and their daughter Samaira.

Ritika’s latest Instagram Stories reveal an adorable selfie with the Hitman himself. The duo seems to be having a good time together during this much-deserved break. Ritika, however, was not very happy with Rohit’s expression in the photo. In the caption over the upload, she referred to the batsman’s poker face and wrote, "Someone tell him it's cool to smile." 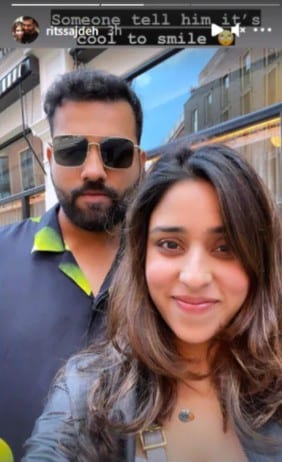 It was rough for the Indian Team to face the eight-wicket defeat to New Zealand in the WTC final. After the tough final, it makes sense that spending time with his family will help India's limited-overs vice-captain regain his momentum.

Last week, Rohit shared an adorable click with his daughter on Instagram. The picture showed the 34-year-old helping his little one hope on a carousel ride in an amusement picture. “If you want to learn to be happy, let a kid remind you how! Pure joy with these cuties,”the caption read.

The Test series against England starts in August. Speaking about Rohit’s performance in the WTC final, many people argued that he wasn’t at his best. Scoring 34 and 30 in his first and second innings respectively, he got India off to a good start despite the unfavourable batting conditions. Many fans and experts are eyeing for a long-awaited ton from the Indian batsman in overseas conditions. Former Pakistan skipper Salman Butt recently backed Rohit and said that the Indian opener has all the skills in his kitty and will be crucial in the Test series, starting August 4.