Should Rohit Sharma replace Virat Kohli as India's limited overs' captain? This is a trillion dollar question which has again started doing rounds in the cricketing circles. And maybe rightly so! Rohit Sharma just led Mumbai Indians to a record fifth IPL title. 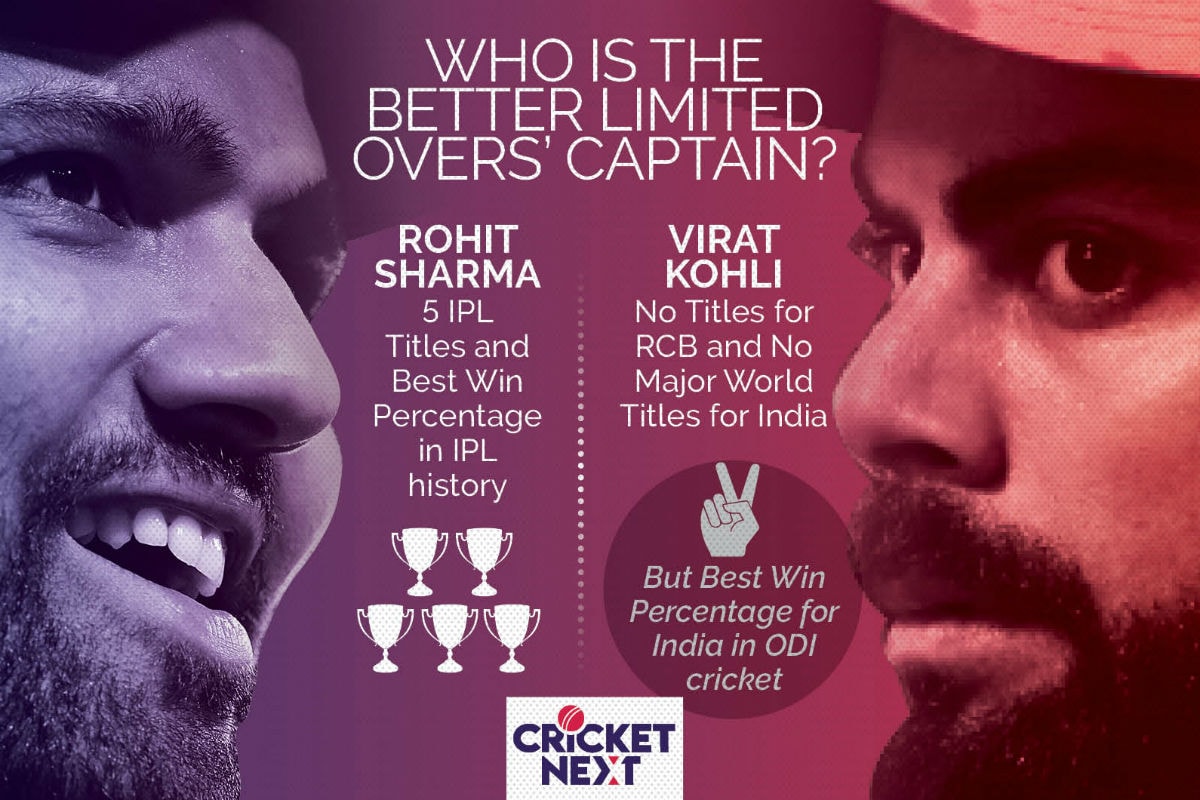 This is a trillion dollar question which has again started doing rounds in the cricketing circles. And maybe rightly so! Rohit Sharma just led Mumbai Indians to a record fifth IPL title. On the other hand, Virat Kohli, despite showing promise this year, failed yet again to inspire Royal Challengers Bangalore and they were ousted in the Eliminator. It is not surprising then that former players and other cricket pundits have again raised the question of having split captaincy in Indian cricket - the most vociferous such appeal coming in from cricketer-turned politician, Gautam Gambhir.

There are a few aspects which need to be addressed before coming to a conclusion. First, the individual record as captains of both Rohit Sharma and Virat Kohli in the IPL and in international cricket. The second issue has nothing to do with statistics but with personalities and the larger Indian culture and how a dual leadership system will fit into this ethos. Let us first get the numbers out of the way. Kohli vs Rohit Captaincy in IPL

Rohit Sharma is the most successful captain in IPL history. This is no mean achievement. The IPL is the most sought after T20 league in the world with the maximum number of world class players. Rohit has led the Mumbai Indians (MI) to victory in 2013, 2015, 2017, 2019 and 2020. He took over the reigns from Harbhajan Singh in 2013 and immediately tasted success leading MI to victory beating CSK in the final at the Eden Gardens by 23 runs. From 2013 to 2020, Rohit has led MI to 5 titles and made the playoff 6 times in 8 editions. He is also the most successful captain in the history of the IPL (in terms of match win percentage; min 10 matches as captain) - Rohit has led MI to 68 wins in 116 IPL matches which is a win percentage of 60.34%.

Contrast Rohit's great record to Kohli's ordinary record for RCB in the IPL. Kohli took over the captaincy from Daniel Vettori mid-way into the 2012 season. It were a tough first three years at the helm for him as RCB finished 5th in 2012 and 2013 (amongst 9 teams) and 7th (amongst 8 teams) in 2014. Kohli then led RCB to the playoffs in 2015 finishing 3rd before reaching the finals in 2016 where they lost to Sunrisers in the final. 2017-2019 again saw RCB's fortunes dwindle as they finished 8th, 6th and 8th. RCB had a better outing in 2020 making the playoffs losing out to the Sunrisers in the Eliminator. Thus, in a nutshell, Kohli has led RCB in 9 editions making the playoffs just thrice. Only once have they reached the final and never been victorious. RCB have finished in the bottom 3 on 4 occasions under Kohli's captaincy. RCB under Kohli has won 55 (and lost 63) of the 125 matches which is a win percentage of 46.69%.

Let us now compare their records in international cricket. Kohli vs Rohit Captaincy in Limited Overs for India

Even in T20I cricket, India has won double of the number of matches they have lost under Kohli. He has led India in 37 matches - they have won 22 and lost 11.

But the problem for Kohli is that in spite of such a phenomenal record, he has not led India to victory in a major world championship. India lost to Pakistan in the 2017 Champions Trophy in England before bowing out to New Zealand in the semi-final of the 2019 World Cup also in England. India won the WT20 (2007), World Cup (2011) and the Champions Trophy (2013) under Dhoni. It is of slight concern that they have been bereft of a world title under Kohli's leadership.

Rohit has not got many opportunities to lead India in limited overs but has been brilliant whenever he has been asked to take over the responsibility. India has won 8 of the 10 ODIs under his leadership including a win in the Asia Cup in Dubai in 2018. His record as captain in T20I cricket is even more outstanding. India has won 15 of the 19 matches under Rohit's captaincy in the format. These include victories in the Nidahas tri-series in Sri Lanka in 2018 and a 3-0 series sweep against West Indies at home in 2018.

There is definitely a case to give Rohit Sharma the captaincy in one of the limited-overs' formats, preferably in T20I cricket. But the question is does India's larger cultural and cricketing ethos support such an arrangement?

The answer, according to a number of cricketing luminaries is an emphatic 'No'. While this dual-leadership system works beautifully in Australia and England and some of the other 'Western' nations, it could create two separate power centres in Indian cricket. There is a fear it can lead to factions and unrest in the dressing room. India and Indians are used to one leader at the top behind who the whole team can rally. Having different captains in different formats can lead to unhealthy competitiveness and rivalry adversely affecting the performance of the team. It is easier to have two leaders when they are specialists in one format and are not a part of the set up in the other. For example: Eoin Morgan is England's limited overs' captain but not a part of the Test set up.

ALSO READ - IPL is Ready for Expansion, Lot of Talented Players Not Getting Opportunities: Rahul Dravid

Another India-centric problem with split captains is of personalities. Will Kohli be happy to relinquish the limited overs' captaincy? Will it affect his batting? There is already a healthy rivalry between him and Rohit. Yes, no one is bigger than the game and the interest of the team but being the captain of the Indian Mens' Cricket Team is a 'HUGE' deal in this cricket-crazy nation and if two-thirds of that is taken away from you, it might create a bit of unrest, to put it politely!

Then What is the Solution?

A balanced solution would be to let Kohli continue till the World T20 in India in 2021 - he still hasn't got a chance to lead India in the prestigious world event. Depending on how the country performs, an informed decision can be taken after the tournament.

But in the meantime if Rohit Sharma wins another IPL title in 2021, well, the trumpets will start beating again.