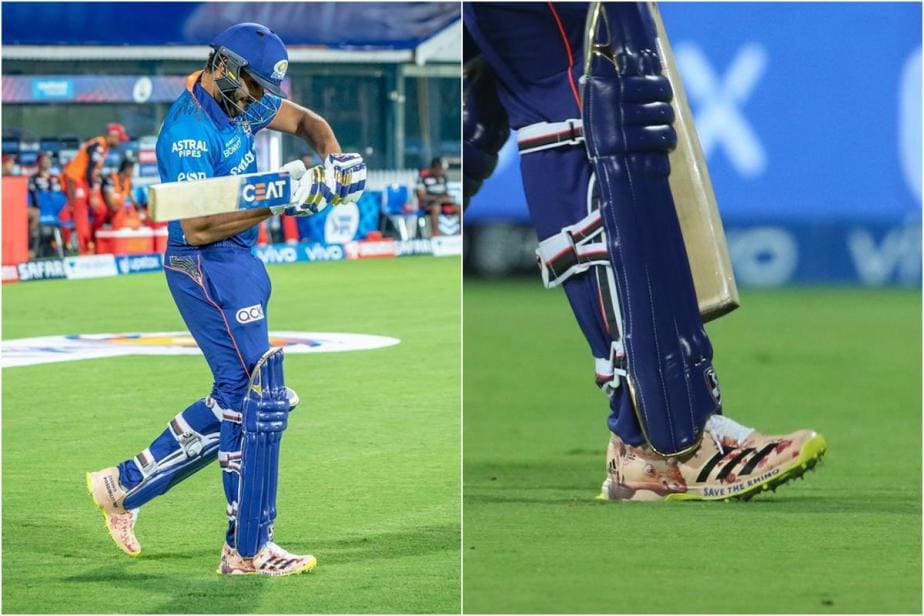 Rohit Sharma has been running a campaign for a long time to create awareness regarding the conservation of the Great One-Horned Rhinoceros or the Indian Rhino.

India’s veteran opening batsman Rohit Sharma has been running a campaign for a long time to create awareness regarding the conservation of the Great One-Horned Rhinoceros or the Indian Rhino. In past, Rohit has collaborated with organizations like World Wide Fund for Nature (WWF) to launch campaigns like Rohit4Rhino to save the vulnerable species from extinction.

This time too, the batsman continued doing his bit for the noble cause as he found a unique way to draw the attention of people towards the Indian Rhino. On April 9, Rohit’s team Mumbai Indians (MI) was up against Virat Kohli-led Royal Challengers Bangalore (RCB) in the opening game of the 14th edition of the Indian Premier League (IPL).

The MI skipper took the field in the marquee game while wearing shoes that sported a unique design giving the message, “Save The Rhino”. The colourful shoes sported by Rohit definitely attracted the attention of fans as it became a talking point on Twitter.

It was special for me to take a cause so close to my heart with me on the field while I do what I love. Every step matters. ❤️ (2/2)

Kevin Pietersen, who is also involved with Rhino conservation projects, posted about the same. Coming to the nail-biting affair between Mumbai Indians and Royal Challengers Bangalore, both the teams were at their best as they put up a competitive fight. In the end, Virat Kohli’s side had the last laugh as they snatched the game from Mumbai at the last ball of the match and registered victory by 2 wickets.

Opening the innings alongside Chris Lynn, Rohit looked in a good rhythm and was able to middle the ball well. After facing 15 balls and scoring 19 runs, the skipper looked settled and was heading towards a big score. However, a mix-up and a miscommunication in the middle resulted in Rohit departing to the pavilion due to a run-out.