Curran has a great attitude on the field. He always gives more than 100% in every match he plays. He is a fierce competitor and never wants to give up. Opener, Lower-Order Finisher, Highest Wicket-Taker – Sam Curran has played many roles for CSK in IPL 2020 and had reasonable success in all of them.

It was his 21-ball 31 as an opener, which included three fours and two sixes, that gave CSK the impetus against SRH in the powerplay. He returned to pick the crucial wicket of the dangerous, David Warner in the SRH powerplay and was also brilliantly restrictive in spite of bowling with the fielding restrictions – he bowled as many as 10 dot balls in the first 6 overs and did not let SRH get off to a flyer in the chase. Although Jadeja got the Player of the Match, it was Curran who was the most impactful player for CSK as they beat SRH by 20 runs.He picked the wicket of Quinton de Kock and conceded just 28 runs in his 4 overs in the tournament opener against Mumbai Indians. He bowled two overs in the powerplay giving away just 10 runs in 2 overs. He bowled as many as 6 dot deliveries to the likes of De Kock, Rohit Sharma and Saurabh Tiwary. Batting at number 6 in the chase, he hammered 18 off 6 deliveries – his cameo playing a crucial role in his team’s five-wicket win in the final over. Curran smoked Krunal Pandya for a six and a four before smacking Bumrah over deep mid-wicket for another maximum. 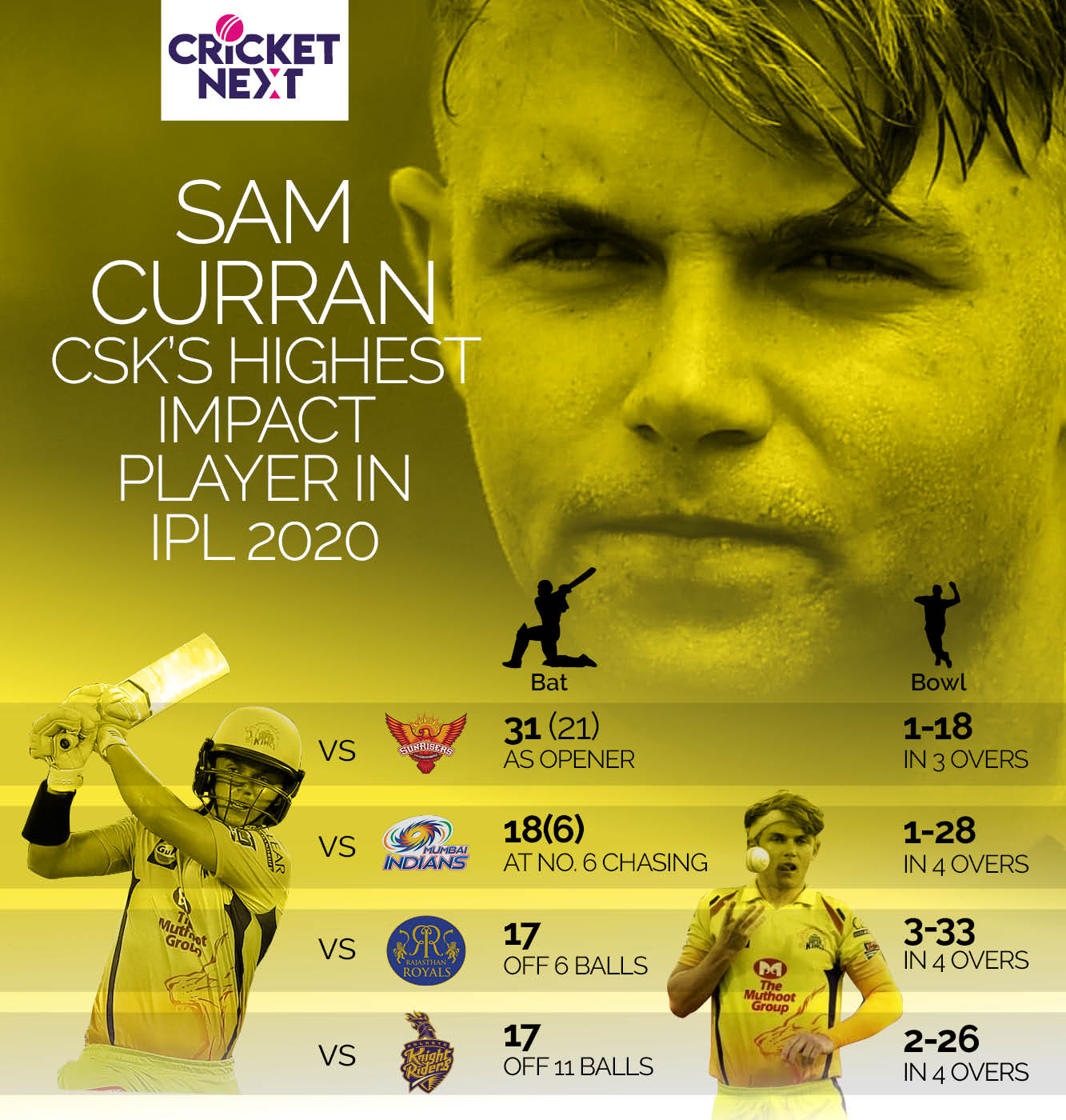 He was the highest wicket-taker with three wickets and also chipped in with 17 off 6 balls against the Royals. He was CSK’s most economical bowler giving away just 27 runs in 4 overs while also picking the wicket of Shreyas Iyer against the Capitals.

Curran again picked the important wickets of Eoin Morgan and Dinesh Karthik against the Knight Riders while also contributing 17 off 11 deliveries batting at number 5.

The all-rounder from England is the highest wicket-taker for CSK in the tournament and has picked 9 wickets in 8 matches at a strike rate of 19.3 and economy rate of 8.55.

Although he has scored just 99 runs in 7 innings, it is his strike rate – of 190.38 – which stands out – his little cameos providing the impetus at the start or the flourish at the death.

CSK has won three matches in IPL 2020 – Curran has given a fine all-round performance in two of these matches.

Curran has a great attitude on the field. He always gives more than 100% in every match he plays. He is a fierce competitor and never wants to give up. He is also very flexible batting in the middle order, at the death and as an opener - this is as much a proof of his temperament as it is of his talent and ability. He is also a versatile bowler who is very restrictive in the powerplay while also chipping in with crucial wickets.

While the likes of Du Plessis, Watson, Dhoni, Jadeja and Bravo often take all the limelight for CSK, the performance of this silent but effective performer often goes unnoticed.

Not big in size but Sam Curran has definitely had the maximum impact for CSK in IPL 2020!