From calling Jadeja a 'Bits and Pieces' player to stating that Virat Kohli 'Did Not Belong To The Test Level', Sanjay Manjrekar has made many controversial comments and bold statements which have created ripples on social media and often landed the former Test batsman in trouble.

Sanjay Manjrekar is regarded as one of the most astute analysts of the game in India today. But not afraid to speak his mind, Manjrekar has often landed himself in trouble and got trolled on social media with some sensational observations, insights and remarks. He was at it again when he claimed that R Ashwin is not an all-time great while also giving his reasons for his big statement.

We look back at 5 such ‘expert comments’ by Manjrekar which have put the spotlight on the former Test specialist and created a stir on social media.

1. Ashwin Not An All-Time Great

“When people start talking about Ashwin as being one of the all-time greats of the game then I have a few problems. One basic problem I have with Ashwin is that when you look at SENA countries, Ashwin doesn’t have a single five-wicket haul there.”

Manjrekar made this sensational claim as India gets ready to face New Zealand in the final of the WTC in Southampton from the 18th of June and reports suggest that both Ashwin and Jadeja will make it to the XI.

While Ashwin did not have a great start in SENA, his numbers have completely transformed since South Africa, 2018 – he has bagged 39 wickets in 11 Tests (20 innings) at an average of 29.97 and strike rate of 71.7 during this period in SENA. That is a stunning transformation from the average of 56.58 and strike rate of 104.2 in the period before. 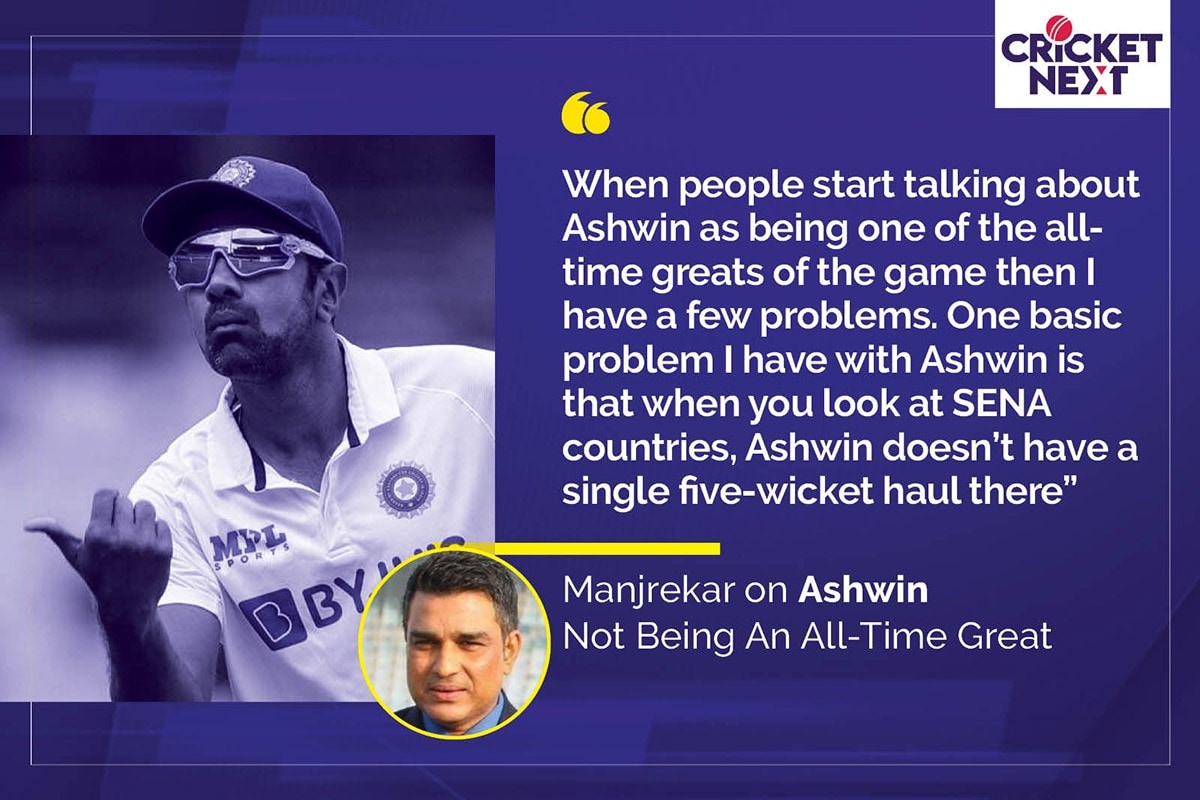 Twitter went viral with the best reply coming from Abhishek – an Ashwin fan.

“High time we stop judging our greats based on what they do in SENA nations. 80% of the legends from SENA nations have been total shi# in subcontinent. Mr. Manjrekar has issues with our players for a long time.”

Ian Chappell disagreed with Manjrekar and cited the example of Joel Garner stating that the legendary pacer did not bag a number of five-wicket hauls as he was part of the West Indies quartet and thus the wickets were shared. He said India boasted of Jadeja who also takes a bunch of the wickets.

Ashwin himself saw the funny side of things and replied to Manjrekar stating, “Apdi Solladha Da Chaari, Manasellam Valikirdhu.” When translated to English, it means: “Don’t say things like that, it hurts.”

2. Jadeja Is A Bits and Pieces Cricketer

“I am not a big fan of bits and pieces players which Jadeja is at this point of his career in 50-over cricket. In Test matches, he is a pure bowler. But in 50-over cricket, I would rather have a batsman and a spinner.”

During the 2019 World Cup, Manjrekar described Jadeja as a ‘bit and pieces player’. However, Jadeja had the last laugh when he produced a sensational 77 off 59 deliveries in the semi-final against New Zealand almost taking India to victory single-handedly. Manjrekar had to eat his words and stated, “By bits ‘n’ pieces of sheer brilliance, he’s ripped me apart on all fronts.”

3. Pollard Does Not Have Brains

Kieron Pollard is one of the best finishers for Mumbai Indians who bats in the lower-order but the West Indies’ T20 captain had promoted himself up the order in one of the games for the franchise. 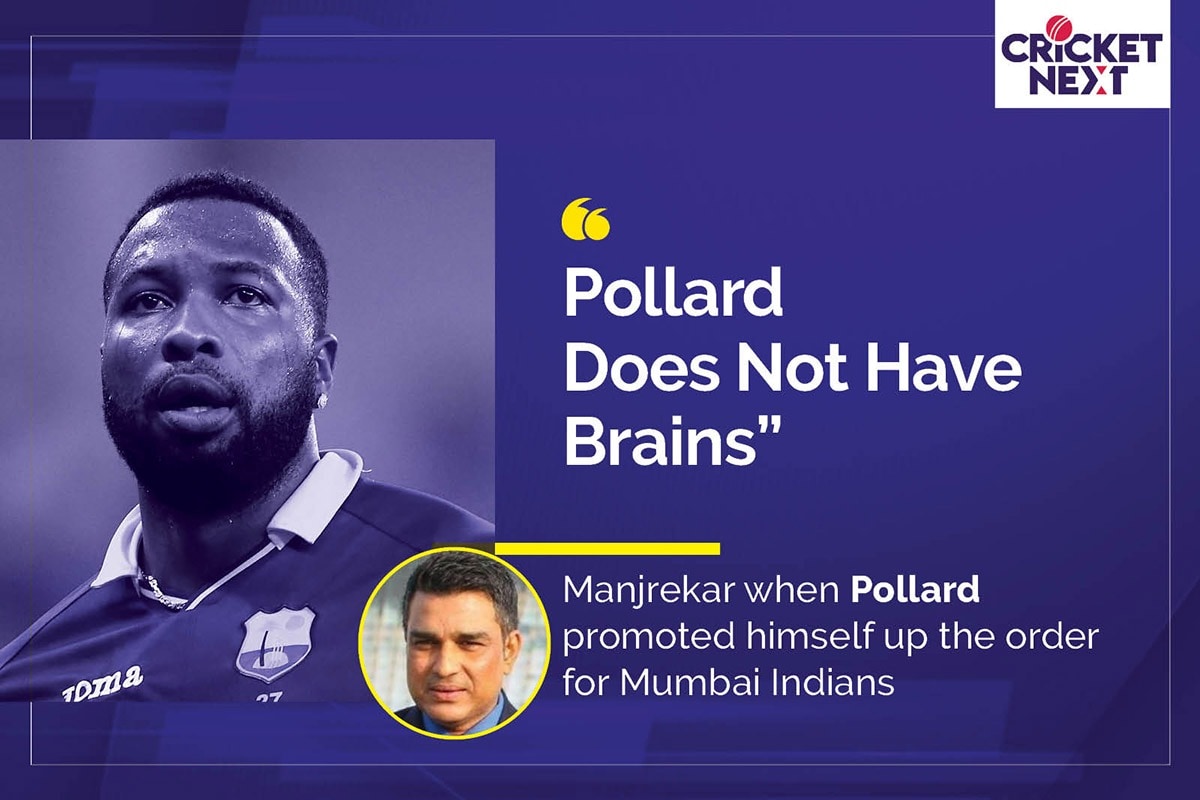 This prompted Manjrekar and he said, ” “Pollard doesn’t have brains” to bat up the order. Pollard was fuming but the matter was resolved when Manjrekar corrected himself and said that Mumbai Indians had made the right decision sending Pollard up the order.

WTC has to Be Best of Three Finals: Mike Hesson, India Coach Ravi Shastri on Same Page
4. Virat Kohli Does Not belong To Test Cricket

Virat Kohli was struggling on India’s tour to Australia in 2011-12 and there were calls to leave him out of the side for the third Test at the W.A.C.A. However, Manjrekar suggested that Kohli should play at Perth just to prove “that he did not belong”. “I would still drop VVS & get Rohit in for the next Test.Makes long term sense. give Virat 1 more Test..just to be sure he does not belong here”

Kohli scored 75 at Perth and went on to get a hundred in the next Test at Adelaide and has since gone on to cement his place as one of the greatest batsmen of all-time.

India was going to play Hardik Pandya as a specialist batsmen in the limited overs’ series in Australia in 2020-21 as he was making a comeback after a lower-back injury and the management did not want to burden the all-rounder.

Manjrekar stated, “My selection and thoughts are based on a principle that I have learned over the years: if you have specialists who can walk-in based on one discipline, you fill your team with those players. Even Hardik Pandya will not be in my team. They add illusory value to the team” 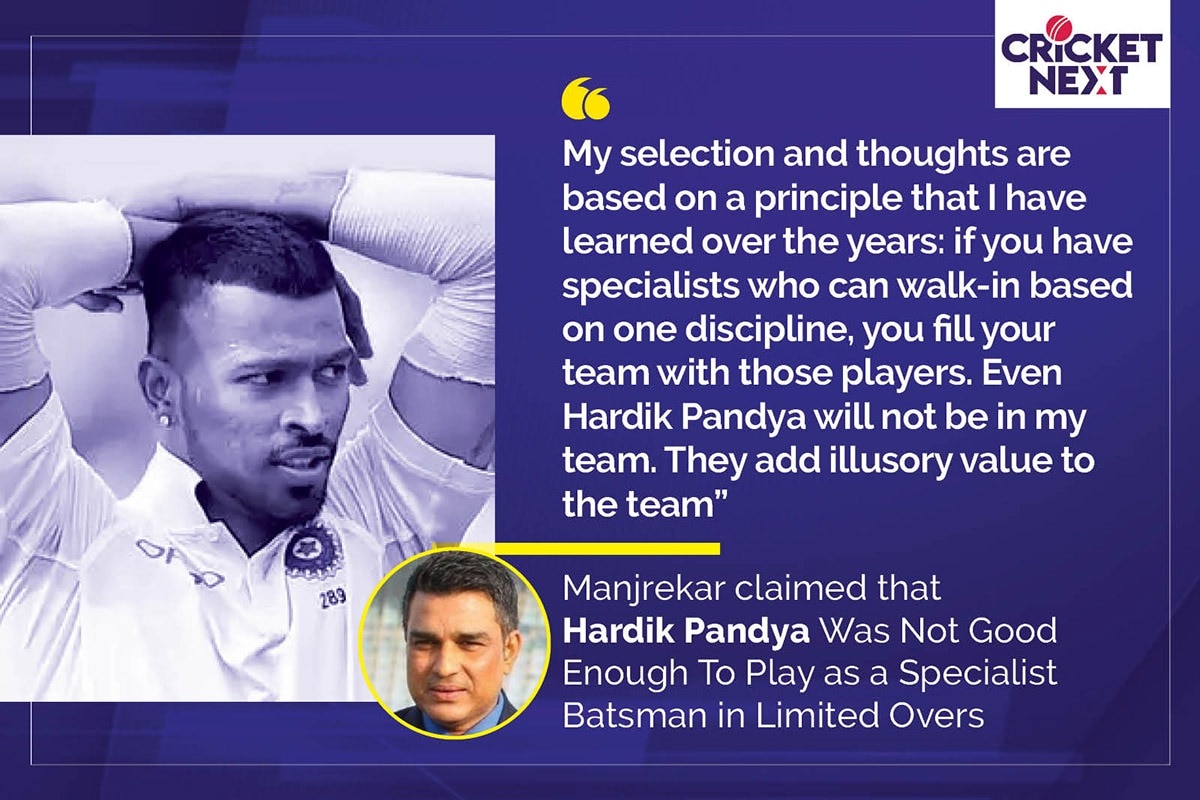 Hardik produced the two best performances of his ODI career scoring 90s in Sydney and Canberra before blasting an undefeated 42 off just 22 deliveries in a T20I match.

Manjrekar had to eat his words and tweeted, “Was skeptical about Hardik the pure batsman in 50 overs cricket. Not anymore.”