The 23-year-old hit back at a particularly persistent troll on Instagram, where the cricketer's daughter enjoys a massive fan following

Sara Tendulkar, daughter of the legendary Sachin Tendulkar, had a perfect response to a troll who made a snide remark on one of her stories she posted on popular photo-sharing platform Instagram recently.

Sara, who boasts of over 1.2 million followers on Instagram, has posted a boomerang of her having coffee with the caption ‘@bluetokaicoffee saves lives’ on Friday.

A troll commented on her story, deriding it by writing ‘wasting father’s money’.

Sara took a screenshot of the message and posted it for her followers, with a clever comeback. She wrote money spent on caffeine was money well-spent, not wasted.

“Umm… Any money spent on caffeine is money well spent, not wasted. LOL (whoever ‘s it may be) 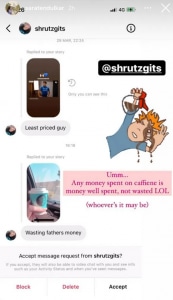 The same troll had earlier commented on the price tag her brother Arjun Tendulkar, a professional cricketer himself, after he was picked by five-time IPL champions Mumbai Indians at his base price during the auction held in February this year.

‘Least priced guy,’ wrote the use with regards to Arjun’s base price of 20 lakh.

After Arjun landed the deal, Sara had commemorated the achievement with the caption, “Nobody can take this achievement away from you. It is yours.”

Sachin Tendulkar is widely regarded as one of the greatest cricketers to have played the game and continues to be the most prolific run-getter in Test and ODI history.