Put into bat, Sehwag (3), Gambhir (29), Unmukt (1) and Manhas (9) were all back in the pavilion before lunch to trigger a collapse from which Delhi couldn't fully recover. 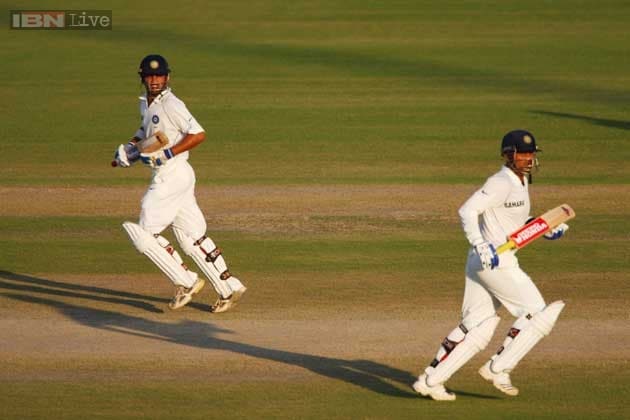 New Delhi: Haryana bowlers produced a disciplined performance to restrict hosts Delhi to 184 for eight at stumps, on the first day of their group A Ranji Trophy encounter as India discards Virender Sehwag and Gautam Gambhir yet again failed to post a big score.

Put into bat on a seamer-friendly Roshanara track, Sehwag (3), Gambhir (29), Unmukt Chand (1) and Mithun Manhas (9) were all back in the pavilion before lunch to trigger a collapse from which Delhi couldn't fully recover.

Although Rajat Bhatia (39) and Vaibhav Rawal (25) added 59 runs for the fifth wicket, Haryana's five-man seam attack maintained the pressure throughout the day by not giving away easy runs.

For Haryana, left-arm seamer Sanjay Badhwar (4 for 56 in 19 overs) was the pick of the bowlers while senior pro Joginder Sharma (2 for 32 in 17.2 overs) also troubled the batsmen with seam and swing.

Punit Bisht scored a quickfire 33 with six fours and a six but didn't last long. All eyes were on Sehwag and Gambhir but both of them looked horribly out of touch as Joginder troubled them on a track that had good carry as well as movement after pitching.

After Unmukt was dismissed trying to hit a cover drive off Badhwar, Sehwag walked out there in the middle in the very second over. The duo batted together for 10 overs but didn't for once were able to dominate the bowling.

After playing 29 balls for his three runs, Sehwag edged an away-going delivery from Joginder to Nitin Saini behind the stumps. Sehwag now has 63 runs in five innings in Ranji Trophy and his dreams of an India comeback is getting bleaker by the day.

Gambhir's only confident stroke was a tuck off his hips to square leg boundary off Ashish Hooda's bowling. However, Badhwar got one delivery to hold its line as Delhi skipper tried a defensive push and was played on in the process.

The 48 for three, soon became 55 for four as Delhi's most consistent batsman Mithun Manhas got a beauty from Joginder. The ball moved a shade after pitching and Manhas nicked it. The resultant catch was taken by a diving Saini.

It was Bhatia and young Rawal, who then tried to steady the ship without taking much risk. Bhatia hit couple of good-looking cover drives while Rawal also defended well at the other end. The 50 partnership came off 143 deliveries.

Bhatia, who scored 39 off 98 deliveries with four boundaries finally got out when he edged a wide delivery from medium pacer Sachin Rana to give Saini his third catch of the day. Rawal, who resisted for more than two and half hours, was dismissed when he edged one from Badhwar to Rana in the second slip. Bisht's breezy knock also ended with a poor shot while Ishant Sharma also didn't last long.

Punjab fight back after being bowled out for 172

Sixteen wickets fell on the opening day of the Ranji Trophy Group A match between Punjab and Gujarat as the home side fought back in a splendid fashion after being bowled out for 172.

Put into bat, Punjab were bundled out for just 172 in 70.1 overs with opener Jiwanjot Singh being the only batsman who made a substantial contribution with a solid 86 at the PCA Stadium.

Wicket-keeper Uday Kaul (22), Ravi Inder Singh (20) and Mayank Sidhana (16) were the other Punjab batsmen who scored in double digit figures.

In reply, Gujarat were in a precarious 61 for six from 17 overs at the draw of stumps with Rujul Bhatt and Akshar Patel batting on 11 and 14 respectively. The Gujarat top order produced a pathetic batting display with only opener Samit Gohel (14) coming up with a double-digit score.

Interestingly, two wickets each fell at the scores of 20, 31 and 36 as Gujarat were reduced to 36 after facing 13 overs.

Vidarbha reach 244/2 against Karnataka on Day 1

Opener Faiz Fazal scored an unbeaten century as Vidarbha reached 244 for two in their first innings against Karnataka at stumps.

Fazal hit an unfinished 259-ball 139, studded with 21 fours and he was ably supported by skipper Shalabh Shrivastava, who scored a patient 75 off 221 balls with the help of nine hits to the fence. The duo were standing tall at the crease at the draw of stumps on the opening day at the Vidarbha Cricket Assoctaion stadium at Jamtha here.

Electing to bat, Vidarbha suffered a big blow early on when they lost opener Akshay Kolhar in the third ball of the innings. He was caught by Manish Pandey off Abhimanyu Mithun's delivery.

Wicket-keeper Amol Ubarhande (18) and Fazal then tried to steady the innings and stitched together 62 runs before the former was sent packing by Abrar Kazi in the 22nd over.

However, Vidarbha took complete control of the match after that wicket as Fazal and new man Shrivastava put together 181 runs for the third wicket to put their team in a commanding position. Mithun and Abrar Kazi were the only bowlers to get a wicket.