The ongoing Test series has been punishing beyond words. But for the players it has been downright arduous. More so on off days. Had Charles Dickens been around, who knows what he would’ve written.

Ravi Shastri’s shenanigans have been loosely documented in the past. It’s mostly hearsay and unconfirmed by Shastri or the team. At least not by the current lot. Whether you love him or loath him, it’s unlikely he doesn’t make you laugh.He’s an institution by himself. What this institution is, however, is open to debate.

The ongoing Test series has been punishing beyond words. But for the players it has been downright arduous. More so on off days. Had Charles Dickens been around, who knows what he would’ve written.

Instead, a fly on the wall brings you some of the inside dope. Where not indicated otherwise, it’s Shastri speaking.

“What has Top Gun(as Shastri refers to Kohli)done? In the first Test, he raised the bar…but then in the third Test he raised it even more. He raised it so much, that when I wanted to quench my thirst at the end of a hard day’s play, the bar was way too high for even me…and I’m a tall man”

Weak laughter from team. Virat has a hearty laugh though.

There are those that say Ravi Shastri has made a mockery of most things but it is his vague brand of humour that has kept him in “high spirits”. 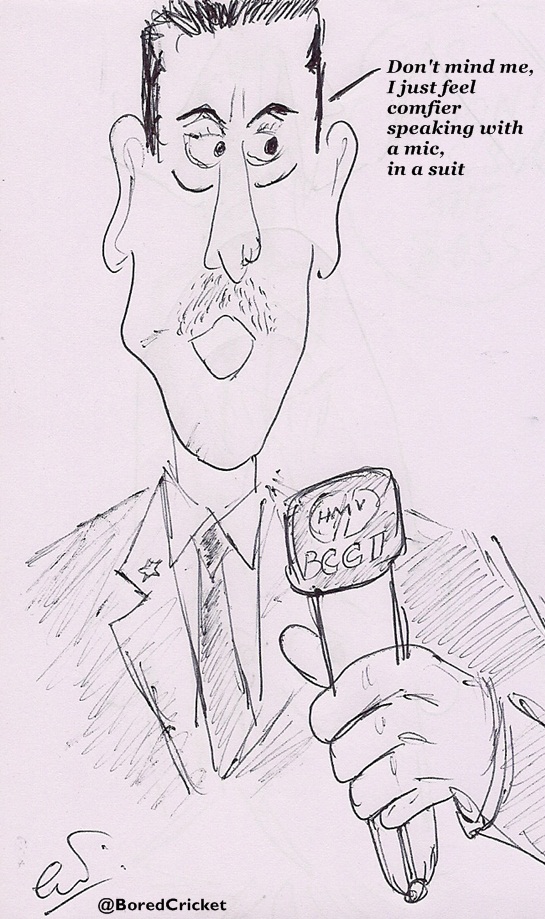 It is now being revealed that Head Coacho (as he likes to be addressed) had a somewhat baffling approach to win the series. “Inspiring eleven men is an uphill task. It’s better to identify that one man who can be inspired and let his bat do all the inspiring”

Virat Kohli was identified as the Inspiration Agent or simply “I” – “I for an I will make the whole world move, mark my words, this is the way forward”

On one of their team lunches in Soho, London, Shastri had the blonde hostess “power dressed to make a power point presentation” titled “SHOCK AND AWE”. She did not say a word. After the presentation, Shastri spoke – “There’s nothing to say as the presentation speaks for itself, let’s break for lunch, boys…or should I say, men?”

For some strange reason, everybody had a lunchbox placed in front of them. “I know your food tastes, boys, so Jinx, you have your Mumbai Koliwada tiffin and Top Gun (Virat), you got your Bento box with salmon sushi…let’s eat! (aside: some more wine for me, please)

The presentation pretty much underlined that Kohli will up his game to such an extent that it will SHOCK England and put them in AWE of him.

What it did not factor is instead of inspiring his own teammates, they too would end up being in awe of him.Leaving them shell-shocked through the series.

Close-by, the Traffic song, “Sometime I feel so uninspired” plays:

Sometimes I feel so uninspired

Sometimes I feel so very tired

Meanwhile, Murali Vijay stares at his rasam blankly, stirring it slowly. Dinesh Karthik, who is sitting alongside him is doing the same, though in an anti-clockwise motion. What happened to R Ashwin? How did Moeen Ali out-bowl him? Shastri, as always, has an explanation that’s out-of-the-box: “No, Moeen did not out-bowl Ashwin. How is that even possible? Let’s call a spade a spade, England’s batsmen out-batted us. I know there is a lot of talk about Ashwin’s fitness there but I don’t make much of that. He was not injured. But yes, after the loss, he is definitely hurting. Could he have done more? Of course. Unless a bowler takes all ten wickets, he can always do more. Even Moeen Ali could have done more.”

When asked whether the sole Indian to take ten wickets could do more for this Indian team, Shastri snapped, “Like I said, he’s taken ten wickets, how can he do more?”

At this point, Shastri was thrilled with his explanation, stating that he had nothing more to say on the Ashwin-Ali comparisons.

He however was ready to field questions on Ravindra Jadeja and why he had not played in the series so far.

“You see, Moeen Ali was England’s secret weapon. And a secret weapon has to be used at the right time. For England, Southampton was the right time. For India, the 5th Test at The Oval was the right time for Jadeja. You might find this funny but hear me out…we could not factor in the tosses, we’ve lost all four tosses…but had we won two tosses, mark my words, it would have been 2-2 after Southampton and going to The Oval, Jadeja would’ve made it 3-2 for India…right, can we break for lunch…”

When asked if Karun Nair, who had scored his triple century against the likes of Moeen Ali and Adil Rashid in December 2016, should have played at Southampton, Shastri was scathing.

“Even KL Rahul made 199 in that game, so we can’t be picking our team based on that one game. It’s like comparing apples and oranges. Next you’ll be saying that Jadeja took 10 wickets against a very similar bunch. But that was Chennai. The difference is chalk and cheese between Chennai and (tapering of) …Southampton…”

When reminded that Moeen Ali’s one wicket cost 190 runs at well over 4.5 and Adil Rashid’s one wicket cost 153 at over 5 in Chennai, Shastri dismissed it saying, “It happens, they both had a bad day at the office but bowlers of that quality won’t have many bad days”.

It was noticed from Nair’s triple, that he was one of the few Indian batsmen who merrily swept his way against the spinners. In a lighter vein, “Let’s just sweep that under the carpet for now, shall we?”

In that 2016-17 India-England series, along with Karun Nair, an Englishman, Keaton Jennings also made his Test debut. He scored a century on debut, followed by a fifty in the next Test. In his next nine Tests, Jennings has not gone past 50.

An out of turn reporter asks of Shastri’s alleged affair with the Lunch Box actress, Nimrat Kaur, which is when he was at his charming best, “I’d like to answer that with a straight bat, as she is not in the Indian squad, I will not be fielding any questions regarding her…”This is followed by an aside:“Cow dung!”