What better than being a cricket fan in India – being married to a cricketer, apparently.

What better than being a cricket fan in India – being married to a cricketer, apparently. Not only do you have the opportunity to dismiss your spouse more than any other opposition bowler, but you can also smash them all over the place with a simple turn for phrase.

WAGs of Indian cricketers haven’t always had it this easy. More so in the last decade or so; not only have they had to contend with repeated back-and-forth series with Sri Lanka (leading to inflated egos of their cricketing halves), they were not always allowed to be on tour.

Not anymore. After captain, Virat Kohli stormed into the BCCI office with his main-man, Ravi Shastri, life changed for cricket families on tour. Not only did Kohli produce a full transcript of his wedding vows, Instagram account of the wedding, expenses undertaken for the wedding, he put forth a most compelling case for his wife, Anushka Sharma, to accompany him on tour – “If after all this, she cannot be there, cheering me on from the stands, what good is all this? We are adults and demand to be treated as adults” (A cheeky official muttered, “but we are not!”)

A teary-eyed Shastri remained largely mum, mumbling something under his morning breath. Although vice-captain, Ajinkya Rahane did not take part in the meeting, his hushed, “Defi-nately” could be heard from outside. Pujara was not picked for the meeting. Had it not gone well, there’s every possibility he would have been there in the follow-up.

Dhoni did not turn up as he didn't want to unsettle the team combination and take a youngster's place for just one interaction.

Rishabh Pant was overheard laughing outside the office. The reason: He felt this was no different from an appeal, one he had to back with a hyena laugh.

So, it has come to pass: WAGs of Indian cricketers will be on tour, batting for their mates, beyond the boundary. Though only after ten days of the tour. Already dealing with the issue of a dearth of practice matches on tour, the BCCI is weary of the ladies belittling already belittled warm up games – “There are 13-14-15 players a side already, we cannot afford to add to the number with star supporters like star wives…like Missus Sharma…or Missus Dhoni”. But Virat Kohli wasn’t going to stop there. He wants Indian cricketers to accompany his wife, Anushka Sharma, on shoots – “They do so much for us. We too must do something for them. Starting with Anushka’s shoots…I want us all to pitch in in our own way. I’ll be speaking to my mates and their wives and seeing how we can help form a strong support group for our spouses and err…girlfriends…y’kno the shelf-life of a cricketer is not much longer than a…supermarket queen, I want to add a skillset to the boys already existing skillsets so once they retire from the game, they can be fully formed human beings…who can pursue any career”

While Dhawan is hopeful to land himself cameos where he tweaks his moustache, he is confident the thigh-five will find takers. He did not expect to be picked for shoots that last longer than a day, “Everyone knows, my utility is for quick jobs, shoots that go on for 4-5 days will not see me doing much – the same old questions of my temperament, and ability to handle the moving camera will be asked”.

For this, Pujara is seen as a prime candidate, although he may not be considered for quick shoots such as TV commercials. Some expect Pujara to do all the donkey work in setting up the shoot, the pre-production etc., so the mainstay like Kohli and the middle order to follow can express themselves in front of the camera.

Dhoni is expected to turn up if it is a highly visible international shoot that lasts a day or less. More so, he would prefer to be behind the scenes expect when it comes to the climax scene. The team management is backing him to deliver, although of late, there are murmurs that he does need time to…

Karun Nair has been put on standby and could be assisting behind the scenes in the main actor’s vanity cars.

While it’s doubtful that Young Prithvi Shaw has any time for anything apart from cricket, the team management feels he is ready to have his name mentioned in the opening credits. Shastri said he saw a mix of Bachchan and Dharmendra in his acting and Al Pacino in the way he walked.

As for KL Rahul’s potential, based on the few ads that he has done, it has been decided to give him a longer rope. “If one looks at his haircut and his beard…there is the same pedigree as Virat…he is ready to play both in front and behind the camera…it also helps, he is fluent …and the tattoos don’t hurt either”, said Shastri. 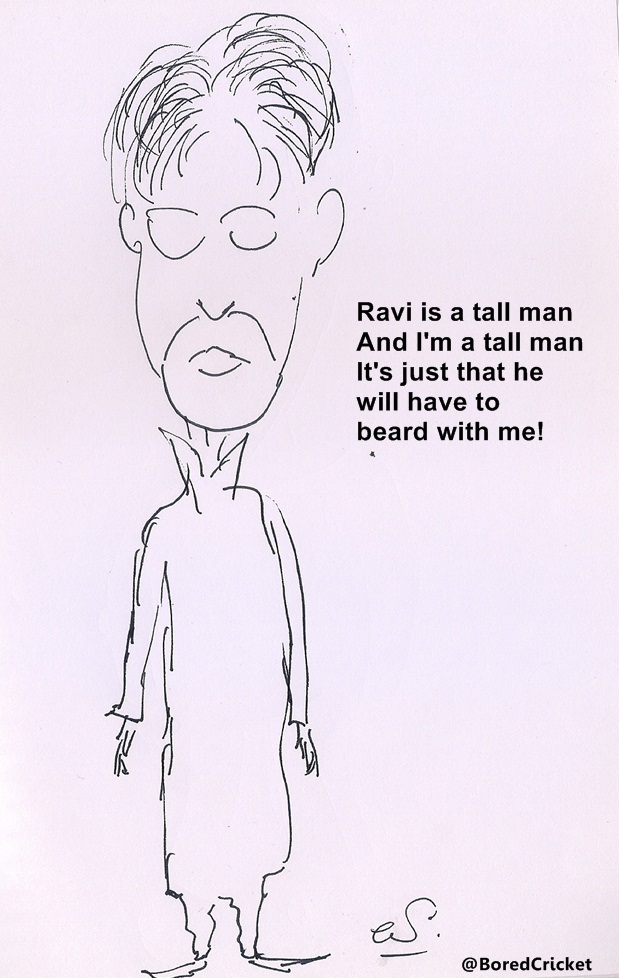 Rishabh Pant who showed great presence of mind (in full pubic gaze) to nonchalantly run his hands through his hair repeatedly, even after being hit by a ball, is being talked up as one for the future who can launch quite a few brands.

“In Rishabh, we see Bollywood material… if and when we make the movie, India Bollywood XI, I see him playing a key role…while I hope to act as myself in it and Anushka will act as herself, we are hoping someone like Big B can play Ravi’s (Shastri) role…both are tall men…and yes, Ravi is not used to the rigours of early mornings…and he can’t always be wearing shades on the shoot”, Kohli laboured in way of an explanation. When asked about whether Big B will play Shastri with a beard, Kohli refused to comment.

Much like Dhawan, Jadeja too is being considered for his quirky actions like the sword unleashing, sword dusting and sword crossing. If and when Anushka stars in a period movie, he is expected to walk into a key role.

After Dravid’s widely watched awkward smoking run-out ad in Hindi, Virat Kohli has invited the former great to participate in the film workshops too. “Dravid has done so much for Indian cricket, we want to in a small way help him out with his Hindi…confident he will come back stronger”

There are also talks to bring Ganguly on board to make amends for his dancing in a motorbike ad.