Action against guilty even if it's a BCCI official, says Rajiv Shukla

The BCCI chief's son-in-law is under the radar after his name emerged during investigations in the spot-fixing case. 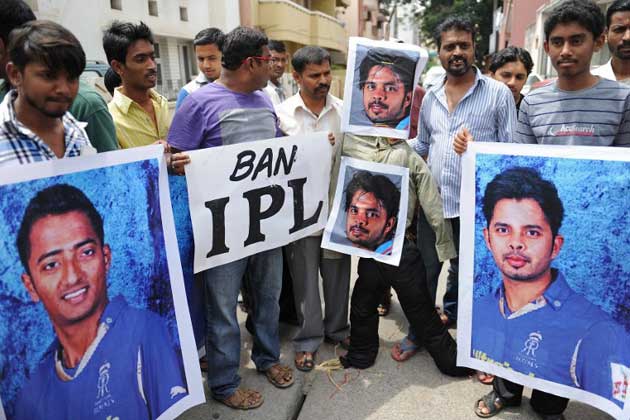 New Delhi: 10.11 pm: IPL chief Rajiv Shukla promises stern action against the guilty, saying no one will escape punishment, even if it includes a BCCI official.

6.44 pm: Lalit Modi tweets, "This spot fixing mess - is getting even worse. Srinivasan and family should immediately resign. They should be banned with immediate effect."

6.20 pm: Former betting kingping Dinesh Kalgi makes startling revelations to CNN-IBN. He says that spot-fixing wasn't restricted to just three matches under scanner, but occurred in at least 15 matches in the current IPL season. He also said that London is the nerve centre for spot-fixing operations and that Dubai provides back-up support. Kalgi also said that more cricketers and Bollywood actors were involved in spot-fixing. "The Delhi Police has only uncovered a minor, amateur spot-fixing operation," he said.

5.43 pm: Delhi Police sources say that suspended Rajasthan Royals player Ajit Chandila was the conduit through which bookies contacted other cricketers. Chandila would get commission for this role. The sources also said that Chandila had been approached on April 4 by a Patiala-based bookie Deepak Kumar, who has now been arrested, to spot-fix a game on May 17 in Hyderabad. However, Chandila was arrested before that. Chandila reportedly took an advance of Rs 15 lakh for that.

5.16 pm: CNN-IBN accesses documents which show that S Sreesanth had set up a company - S36 Sports & Entertainment - in September 2010 in Bangalore and one of its listed objectives was to "run betting houses in India and abroad". Other objectives included running coaching institutes and gymnasiums.

He has alleged that the conduct of certain activities and receipt of income were totally commercial and there was no element of charity in the conduct of BCCI. The court has sent a notice to the central government, Chairman of the IPL Rajeev Shukla and BCCI President N Srinivasan. They have been asked to respond within two weeks.

1:57 pm: Meanwhile, the Delhi High Court has dismissed a plea asking for the IPL to be brought under the Sports Ministry instead of the BCCI.

1:33 pm: N Srinivasan's son-in-law was linked according to sources, after the arrest of Bollywood actor Vindoo Dara Singh. CNN-IBN learns that Vindoo made several calls to Guru Meiyappan, and that he has admitted to being in touch with a relative of the CSK franchise owner. Mumbai Police sources claim Vindoo Singh placed bets on behalf of Guru Meiyappan. Police sources, however say there is no evidence of spot fixing on Guru Meiyappan, but only of heavy betting which is illegal. Meiyappan is the Team Principal and CEO of the Chennai Super Kings.

1:03 pm: A Delhi Police team questioned Sreesanth's girlfriend, her father and a friend of hers in Jaipur on Tuesday. The police seized the two cell phones that the Kerala pacer had gifted his girlfriend during his recent Jaipur visit. The two handsets belonged to the bookies. The police are examining the call details of both the phones. They have also quizzed the girl on her links with Sreesanth and his aide Jiju Janardhan. Sreesanth's girlfriend had accompanied him for all the IPL matches.

10:27 am: Arrested actor Vindoo Dara Singh's residence in Juhu has been raided and sources say some cash has also been recovered.

9:58 am: Sources say there is a high possibility of the summoning of the person mentioned by Vindoo Dara Singh.

8:31 am: CNN-IBN learns that Vindoo made several calls to a senior individual associated with the Chennai Super Kings. Sources add that the police say there is no evidence yet of fixing but of heavy betting.

8:10 am: In more shocking revelations in connection with the IPL spot-fixing scandal, arrested actor Vindoo Dara Singh has admitted to being in touch with a relative of the Chennai Super Kings franchise owner who placed bets through him, according to sources. Sources say the Mumbai Police is probing how Vindoo had ready access to the CSK VIP box.

Sources in the Mumbai Police now say that they are probing a Chennai link to the scandal. Sources say several calls made to a Chennai number are being probed.

This comes a day after more drama unfolded in the scandal on Tuesday. Bollywood connections were established with actor Vindoo Dara Singh's arrest in Mumbai, while the Delhi Police revealed details of Sreesanth's lavish spending, saying he used the spot-fixing money to buy expensive clothes and gadgets.

The competitiveness between Delhi and Mumbai police continues to yield rapid developments. On Tuesday, the Mumbai Police arrested actor Vindoo Dara Singh in their IPL probe in what's now the first direct link of Bollywood with the betting mafia. Vindoo has been accused of being involved with bookies and being a conduit in the illegal operation. Alpesh Patel, a man accused of facilitating transfer of over crore of rupees from Dubai to India through hawala was also arrested.

Meanwhile, the Delhi Police took Indian cricketer Sreesanth to Jaipur and raided a woman friend's house. The police seized a new Blackberry Z10 phone from her home, a pair of luxury brand diesel jeans worth close to Rs 2 lakh and purchase receipts of luxury items. The police claim the items were purchased through money paid by bookies. The statements of shopkeepers too were recorded in a clear attempt to establish the money trail.

And in more bad news for the former India pacer, the police added an additional and harsher charge against him, that of criminal breach of trust, saying he had cheated his franchisee Rajasthan Royals of its contractual obligations by indulging in spot-fixing and going against the sworn code of conduct.

The Delhi Police also claims it has evidence to prove that another attempt was made by Sreesanth to spot-fix an IPL game, sources said. Sreesanth made an attempt to spot-fix a Rajasthan Royals and Kings XI Punjab match on May 9, sources added.

Sreesanth has admitted to this in a taped conversation. He admitted that he bowled a no ball on the last ball, but his attempts to spot-fix the May 9 match did not materialise, sources said.

A Delhi court had remanded Sreesanth and 10 others to five more days in police custody in the IPL spot-fixing case while sending four others to judicial custody.

Sreesanth also said "as a cricketer, I have learnt to take knocks along with accolades, in my stride. I recognise that I am going through a tough period in my life.

"I have utmost faith in our judicial process and I am confident that with time I will be proved innocent, and my honour and dignity will be vindicated and restored," the statement said.