Sreesanth and Ankeet Chavan were released on bail on Tuesday evening. However, another RR player Ajit Chandila has not applied for bail. 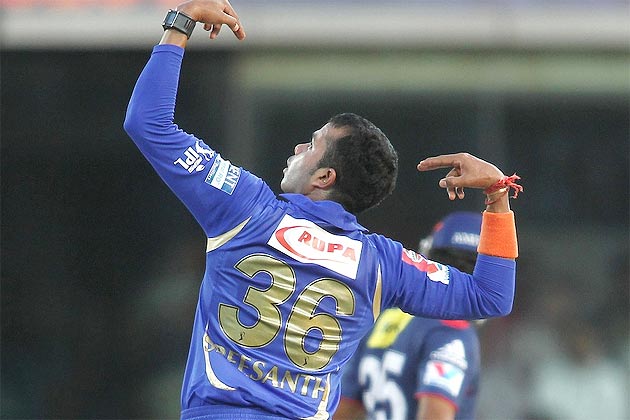 Kochi: Claiming innocence and expressing faith in the judiciary, India Test pacer S Sreesanth, who was released on bail after being arrested for alleged involvement in the IPL spot-fixing scandal, on Wednesday said he is hopeful of making a comeback to the national side.

Sreesanth, who is out on bail after being arrested for being allegedly involved in the IPL spot-fixing case, said he was confident of getting a clean chit in the case.

"Even my enemies should not suffer this fate," Sreesanth, who arrived here this morning at the nearby Nedumbassery airport from Delhi, said.

"I got bail yesterday. I am confident of getting a clean chit... Even my enemies should not suffer this fate," he said, adding he had no role in the spot-fixing episode.

Police and CISF security had a tough time in bringing the cricketer out of the airport as a huge crowd of fans, onlookers and media personnel had gathered to receive him.

"I am happy to be here. I can meet my people," an emotional Sreesanth, who arrived here after spending 27 days in Tihar jail, said.

Sreesanth and Rajasthan Royals team-mate Ankeet Chavan were released on bail last evening. However, another RR player Ajit Chandila has not applied for bail.

The three were arrested on May 16, along with 11 bookies, from Mumbai by Delhi police and charged under Indian Penal Code Section 420 and 120B, which deal with fraud, cheating and criminal conspiracy.

"I promise you I will never give up," Sreesanth, who is out on bail after spending 27 days in the Tihar Jail, said upon his return to his hometown.

Despite being weary after his arrival here from Delhi, Sreesanth said he was very happy to be back with his parents and said he would soon start training.

Asked if he had been 'trapped' in the case, Sreesanth said, "I have done no wrong. The arrest could be part of a conspiracy. It will soon come out. I am confident good will happen."

On his experience in Tihar Jail, the pacer said he does not wish to explain anything.

"All I can say is that I love this game. I have given the very best from the day one I played this game. You must trust me. I totally believe in judiciary. I am waiting for everything to be sorted out. I will surely like to explain everything," he said.

Sreesanth said he got full support of the cricketing fraternity.

"Whatever has happened, has happened for a reason. I am happy to be home. Please pray for me. I promise not to give up," Sreesanth said.

He declined to reply when asked to comment on Delhi Police plans to file an appeal against his bail.