Home » Cricket Home » News » Stumped! In and Out of the Gloves for Parthiv Patel
6-MIN READ

Stumped! In and Out of the Gloves for Parthiv Patel

Stumped! In and Out of the Gloves for Parthiv Patel

Retirement is normally for silver-haired sagacious men who can’t hide their age. Yes, sport retires you early, but one could contest that Parthiv in retirement and in debut, looks just as young. He doesn’t look like he has aged but given a “what could have been career”, the regret has certainly aged him.

I clearly remember that English summer of 2002.

I am dating myself now, but I was a teenager back then, but apropos of age that’s when I saw a cherubic young lad with a Peter Pan boyish face, barely older to me by a few years taking center-stage at Trent Bridge. Think Nottingham, think Robin Hood, and why he looked as young as any of his Merrie Men. But like Robin Hood facing an onslaught from the Sheriff of Nottingham, Parthiv Patel, faced an onslaught of bouncers at 145 KMPH from the likes of gargantuan lads like Andrew Flintoff and Steve Harmison, all aimed at a diminutive lad, not legally adult in most parts of the world. He was only 17 years and 153 days. This was the first realization of age for me. I was 15, I was a schoolboy and saw myself as one, and cricketers in my teenage eyes were “adults” elder than in me in age and size. Sure, I was well versed of Sachin playing at the age of 16, but his debut was “before my time”. But that someone close to my age, who had the same innocent boyish looks and just as pocket-size as me, was standing tall to bowlers older and bigger than him, was unfathomable. This was my first epiphany, where a boy close to my age was considered too young to handle alcohol or a ballot, not old enough for a shaving blade but old enough for a wooden blade to face metaphoric ‘Shastriesque’ tracer bullets in international cricket was something I had to wrap my head around.

He had a nought in the first innings but a match-saving 19 in the second innings. The youngest keeper ever to play Test cricket and the third-youngest Indian cricketer back then, after Sachin Tendulkar and L Sivaramakrishnan. A duck on debut and match-saving innings, all before his voice had cracked, this had the makings of a ‘Sachinesque’ story.

Parthiv Patel Retires: 95 in a Washout and a Match-Turning 69 at Rawalpindi

Things looked ominous from there, starting so young, under the aegis of the triumvirate (Ganguly, Dravid, and Tendulkar) and with plenty of time to groom himself. He was Sourav Ganguly’s blue-eyed boy and fast-tracked into the Indian team as the only specialist keeper in the 2003 World Cup squad in South Africa. He didn’t play a single match as Rahul Dravid’s versatility and gamesmanship meant that he would don the gloves so that an extra specialist batsman in Dinesh Mongia could be accommodated.

Parthiv Patel Retires: A Look at His Illustrious Cricket Career - In Pics 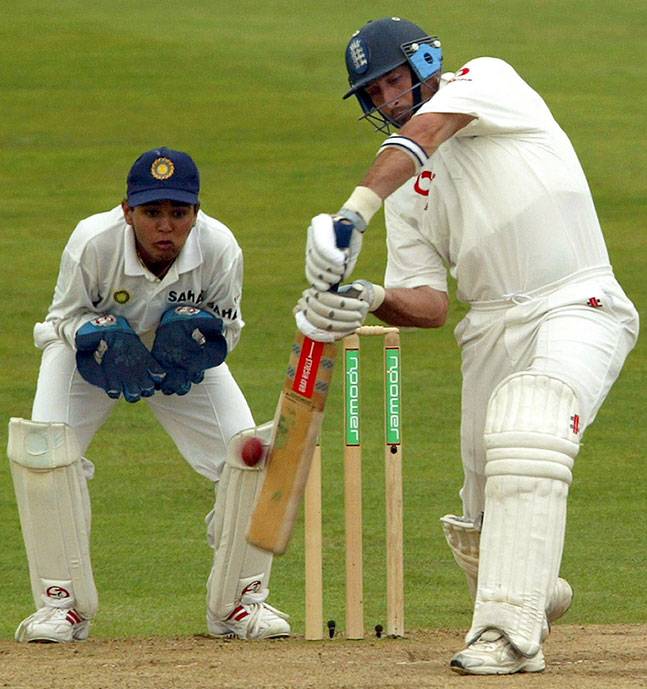 A tour ‘Down Under’ meant that Parthiv was on cloud nine, being the first-choice wicketkeeper to face the imperious Australians in four test-matches. It was a historic series, with 1-1 draw, a precious win at the old Adelaide Oval, a smorgasbord of runs from Dravid, Laxman, Sehwag, Ganguly, and Sachin, but also remembered as Steve Waugh’s (Tugga) exit from the game.

Parthiv Patel Announces Retirement From All Forms of Cricket

When in Australia, do as the Aussies do! His docile looks didn’t preclude him from sledging. During the final Test at the SCG, Parthiv with a sense of brazenness sledged Australia’s favourite son that day, Tugga, that too in his last hoorah on his home ground. Parthiv jokingly recalled how the elder Waugh reminded him that he was in his diapers while the latter made his debut for Australia (literally true as Tugga made his debut in 1985, the year of Parthiv’s birth).

Parthiv Patel Announces Retirement from All Forms of Cricket, Here’s How Twitter Reacted

If ever there was a literal connotation to grabbing opportunities with both hands, it would be Parthiv letting go of that crucial stumping chance of Ricky Ponting. Parthiv perhaps had let go of his career, and it was evinced that Parthiv was not just short, but he had come up short with the glove. However, he was young, so there was time, plenty of time, right? Wrong! Then came Mahendra Singh Dhoni, and as per my last article for this outlet on Dhoni’s retirement, well evinced to say that the rest was history as far as international cricket was concerned.

Parthiv didn’t fade away into obscurity, just then. I had the good fortune of covering the first season of the inaugural Indian Premier League and I was tasked with following the Chennai Super Kings, as one of my two teams to cover. Parthiv quipped, that during the famous 2004 series, his parents back home would caution him to not stand behind Matthew Hayden when the latter was batting. As the broad-shouldered colossal Queenslander all but covered the miniature lad standing at the wicket behind him.

The juxtaposition in height and stature was evident when he came out to bat with Matthew Hayden for CSK. Why, Haydos looked like an NFL Linebacker, while Parthiv was barely as tall as the stumps. But the beauty of the willow was that to the scoreboard and bowler, it made little difference as both southpaws aggressively piled on the runs. If it wasn’t solely for glovework, Parthiv amassed runs in domestic cricket, reaching close to the pinnacle of the 10,000 mountain with 9500 runs at an average of 44.18; behind only august company in Wasim Jaffer, Cheteshwar Pujara, Sachin Tendulkar and Gautam Gambhir. He even helped his home state of Gujarat to Ranji Trophy heroics against the dominant Mumbai side.

As privileged as he was as a teenager to share the dressing room with the likes of Tendulkar, Dravid, Ganguly, Sehwag, Yuvraj, ironically this was also his coup-de-grace, which meant there was little, sorry no place for another specialist batsman. There was room for him in the CSK dressing room with MS Dhoni, but not in the India one.

Soon, Parthiv went from third youngest to fourth-youngest Test debutant for India, as Piyush Chawla knocked him one spot down and knocked his stumps over in domestic cricket, and while MS Dhoni had knocked him and any other keeper aspirant away from the coveted position. Just ask Dinesh Karthik!

As my mentor, economist, and historian friend, Prasenjit. K. Basu, author of Asia Reborn writes “had Parthiv Patel lived in any other era he would have had a rich, fulfilling career as one of India’s finest ‘keeper-batsmen. But he had the misfortune of getting his test cap when he was 17, at a time when he was a half-formed cricketer. In the normal course, he would have been an understudy for a time, learning the ropes of international cricket as he matured.”

But alas! Hard to think that a little over 17 years ago, Parthiv was only 17 and had a world of promise, opportunities and looked set to write his own Syed Kirmani and Nayan Mongia story in terms of longevity. But he lived in the era of not just India’s greatest keeper, but possibly the best in the world cricket (perhaps only behind Adam Gilchrist), MS Dhoni was and remains a brand in the cricketing zeitgeist. Perhaps, Parthiv would have given anything to have been born fifteen years later.

Today, however, he fades into cricketing obscurity. Retirement is normally for silver-haired sagacious men who can’t hide their age. Yes, sport retires you early, but one could contest that Parthiv in retirement and in debut, looks just as young. He doesn’t look like he has aged but given a “what could have been career”, the regret has certainly aged him.

A journalist by profession, Akshobh Giridharadas was based out of Singapore as a reporter and producer with Channel News Asia, Singapore covering international business news. He writes on diverse topics such as geopolitics, business, tech and sports. His previous endeavours include working at ESPN STAR and FOX networks. He is a two time TEDx speaker and is a graduate from the Fletcher School of Law & Diplomacy, Tufts in international affairs.