The T20I Team of 2020 has 4 players from England, two Indians and Australians each and one player each from New Zealand, South Africa and West Indies.

There were some great performances in T20I cricket in 2020 - from Dawid Malan’s record-breaking batting against South Africa to KL Rahul’s aggregate in the calendar year, from Jasprit Bumrah’s phenomenal economy rate to Lungi Ngidi’s exceptional ability to pick wickets.

We analyze the numbers and performances and select the T20I XI of the Year 2020. 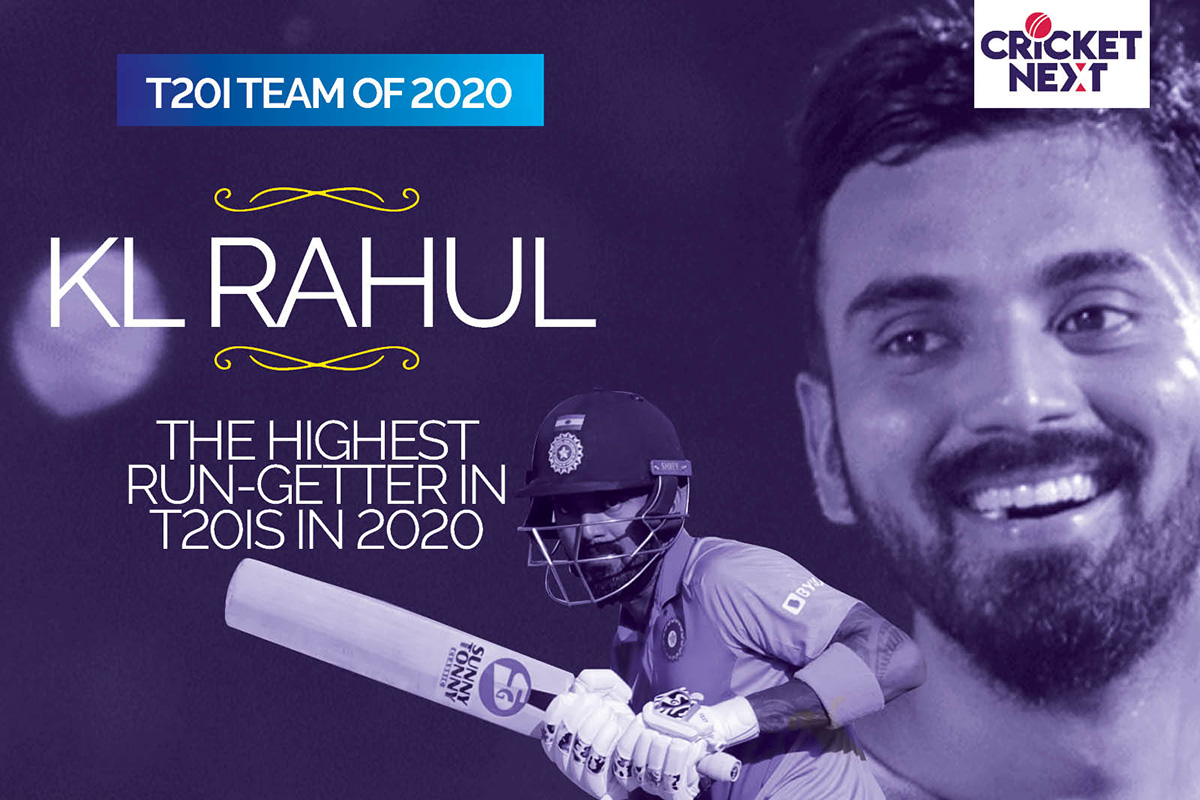 KL Rahul has scored the highest runs in T20I cricket in the calendar year 2020, all as opener for India. He has an aggregate of 404 runs in 10 innings at an average of 44.88 and strike rate of 140.76 including 4 fifties in 2020. He has been phenomenally consistent failing in just one of the 10 innings in the calendar year. Jos Buttler has scored 291 runs in 8 innings as an opener - the standout feature of his batting being his strike rate of 150.77. He registered 3 fifties - two against South Africa and one against Australia. Even more significantly, two of these helped his team to a series win. Buttler edged out the great Babar Azam of Pakistan who had a higher average but played 4 of his 6 matches against Bangladesh and Zimbabwe. Dawid Malan has had an incredible start to his T20I career. He has an aggregate of 855 runs in 19 innings at an average of 53.43 and strike rate of 149.47 including a hundred and 9 fifties. From number 3, he has scored 386 runs in 9 innings at 55.14 and a strike rate of 144.56 including 4 fifties in 2020. Malan smashed a sensational unbeaten 99 off just 47 deliveries hammering 11 fours and 5 sixes in the third T20I against South Africa in Cape Town in December - not only did England sweep the three-match series but the performance also meant that Malan set a new record for ranking-points in T20I cricket - as of the 2nd of December, he had 915 points in the ICC Rankings. Kane Williamson did what he does best - played the role of the playmaker in the middle-order - and set up New Zealand’s 9 wicket win against Pakistan in the second T20I at Hamilton. His calm and composed unbeaten 57 off 42 deliveries ensured a series win for New Zealand. Williamson scored 217 runs in 4 innings from positions 3-5 at a strike rate of 159.55 including three fifties in the calendar year. The other candidate for the number 4 position was Pakistan’s veteran, Mohammad Hafeez, who has also had an amazing year with the bat in the format but Williamson’s ability to drop anchor, face pressure as well as hit the big shots when required made it hard for him to not be a part of the XI. Eoin Morgan hammered an unbeaten 57 off just 22 deliveries from number 5 in the series decider at Centurion in February 2020 helping England chase down South Africa’s mammoth total of 222 with 5 balls to spare. Overall, he scored 238 runs in the year at a strike rate of 173.72 - the highest for any batsman who scored a minimum of 200 runs from positions 3-5 in 2020. Under Morgan’s leadership, England have now gone unbeaten in 8 series in a row in the format starting from a one-off match against Sri Lanka in October, 2018 - thus, he is the undisputed choice as captain of the T20I Team of the Year too. Not a difficult choice for number 6. One of the most destructive batsmen in the format, as he displayed for Mumbai Indians in the IPL 2020 too, Kieron Pollard scored 168 runs in 4 innings but a phenomenal strike rate of 204.87. He hammered an unbeaten 75 off just 37 deliveries including 8 towering sixes against New Zealand in Auckland in November, 2020. Pollard also chipped in with 9 wickets and was fairly economical in 2020. The second all-rounder’s slot goes to Ashton Agar of Australia who picked 13 wickets in just 6 matches at 12.46 apiece at a brilliant economy rate of just 6.75 in the calendar year. His best performance of 5-24 in 4 overs came against South Africa in Johannesburg earlier this year. It was a difficult choice between the two leg-spinners but Adil Rashid just edged out Adam Zampa courtesy his performance in the big matches. Rashid returned with figures of 2-23 in 4 overs (including the wickets of Hendricks and Du Plessis in successive overs) in the second T20I against South Africa in Paarl - thereby helping England to restrict the home team to a below-par total which was chased down by the visitors. Rashid picked 12 wickets from 11 innings at an economy rate of 7.52 in 2020. Mitchell Starc and Jasprit Bumrah stand out amongst fast bowlers in 2020, not so much for their quintessential quality of picking wickets, but their splendid restrictive abilities. While Bumrah had a phenomenal economy rate  of just 6.38, Starc picked 8 wickets in 7 matches at an economy rate of 7.87 in 2020.

A left-arm fast hostile bowler and a right-arm fast yorker specialist at the death - a lethal combination in the XI of the year. Bumrah’s best performance of the year (3-12 in 4 overs at Mount Maunganui) helped India sweep the series 5-0 in New Zealand. Lungi Ngidi walks into the XI on the basis of the sheer number of wickets he has taken in the year - the South African has bagged 17 wickets in just 9 matches at a strike rate of 11.7 in 2020. Although he has been expensive and gone at 10.47 runs per over, his wicket-taking prowess seals him a spot in the team. The T20I Team of 2020 has 4 players from England, two Indians and Australians each and one player each from New Zealand, South Africa and West Indies.