Although it is a low sample, we select the Test XI of the Year giving importance to context of the performance, opposition, significance of contribution, home-away, pressure absorbed, contribution in victories and other factors.

Nikhil Narain
2020 was a difficult year for life, everything else and yes, cricket too. The Covid-19 pandemic ensured that it grabbed all the headlines and a lot of international cricket was either cancelled or postponed. However, there was a resumption from August which meant that a total of 22 Tests were played in the calendar year. Although it is a low sample, we select the Test XI of the Year giving importance to context of the performance, opposition, significance of contribution, home-away, pressure absorbed, contribution in victories and other factors. For batsmen we give weightage to performances from specific positions while also using common sense and cricketing intelligence.
Here is CricketNext’s Test Team of the Year 2020:
1. Dom Sibley
2. Tom Latham
3. Kane Williamson (c)
4. Babar Azam
5. Ben Stokes
6. Jos Buttler (wk)
7. Chris Woakes
8. Stuart Broad
9. R Ashwin
10. Kyle Jamieson
11. Tim Southee
THE OPENERS 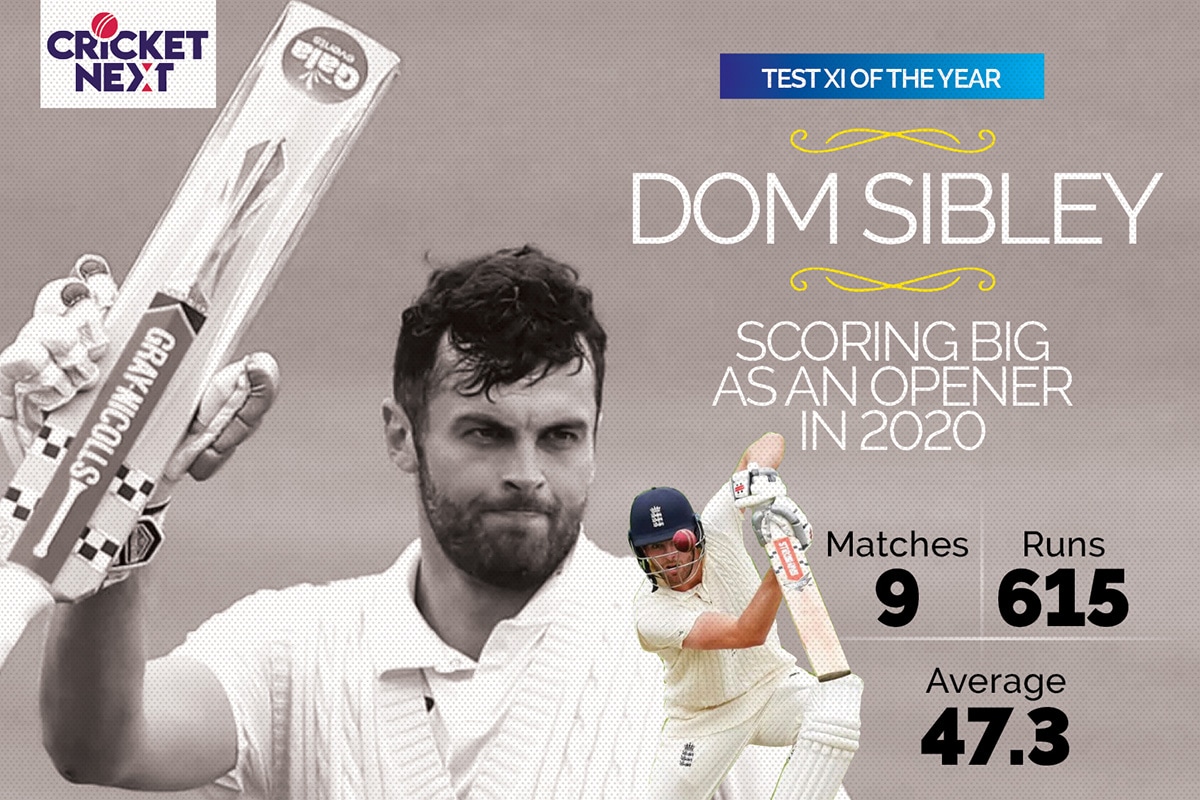 Dom Sibley, walks into the Test XI of the year on the sheer weight of the number of runs he has scored in 2020 as an opener. The England batsman has an aggregate of 615 runs in 9 Tests (the second-highest run-scorer for any position in 2020) at an average of 47.3. He scored a patient and resolute 133 off 311 deliveries in the second innings in Cape Town helping England draw level the four-match at 1-1. Sibley again scored a hundred under pressure against the West Indies in the second Test in Manchester in July. While the top-order failed around him, the courageous opener registered a dogged 120 off 372 deliveries in the first innings helping the home team to a big total which ultimately resulted in a 113-run victory. It was a three-way contest between Tom Latham, Shan Masood and Dean Elgar for the second opener’s slot – the winner being the New Zealander. While Masood registered two hundreds, one of them was against Bangladesh and the other in a losing cause against England. Elgar was consistent at the top of the order throughout the year but not outstanding.
Latham scored 342 runs in 6 Tests (10 innings) at an average of 38 including 4 fifties. He top-scored for New Zealand in the first innings of the second Test against India in Christchurch with 52 and got exactly as many in the second innings too helping the home team chased down 132 with 7 wickets in hand. Latham’s defiant performance with the bat meant that New Zealand had beaten India 2-0 in the series which might prove to be the difference between a spot in the final of the ICC World Test Championship.
THE MIDDLE-ORDER Kane Williamson had an aggregate of 498 runs in 4 Tests (6 innings) at an average of 83 in 2020. He scored an under-pressure 129 in the first innings against Pakistan at Mount Maunganui helping New Zealand to a big total – the home team went on to win a thriller of a Test late on Day 5 to take a 1-0 lead in the two-match series. Also, very significantly, the victory meant that New Zealand, for the very first time, had climbed to the number 1 spot of the ICC Test Rankings and an inch closer to the ICC World Test Championship Final at Lord’s next year. Williamson had recorded the second-highest individual Test score of the year when he piled up 251 in an innings win over the West Indies in Hamilton. The New Zealand captain had scored a fine 89 (top-score of the innings) helping his side to a massive and decisive first innings lead in the series opener against India in Wellington in February.
The only real challenger to Williamson for the number 3 position was Marnus Labuschagne who had an aggregate of 403 runs in 3 Tests at an average of 67.16 including a hundred and a fifty in the year. But the context of Williamson’s performances tilted the balance in favour of the New Zealand batsman. 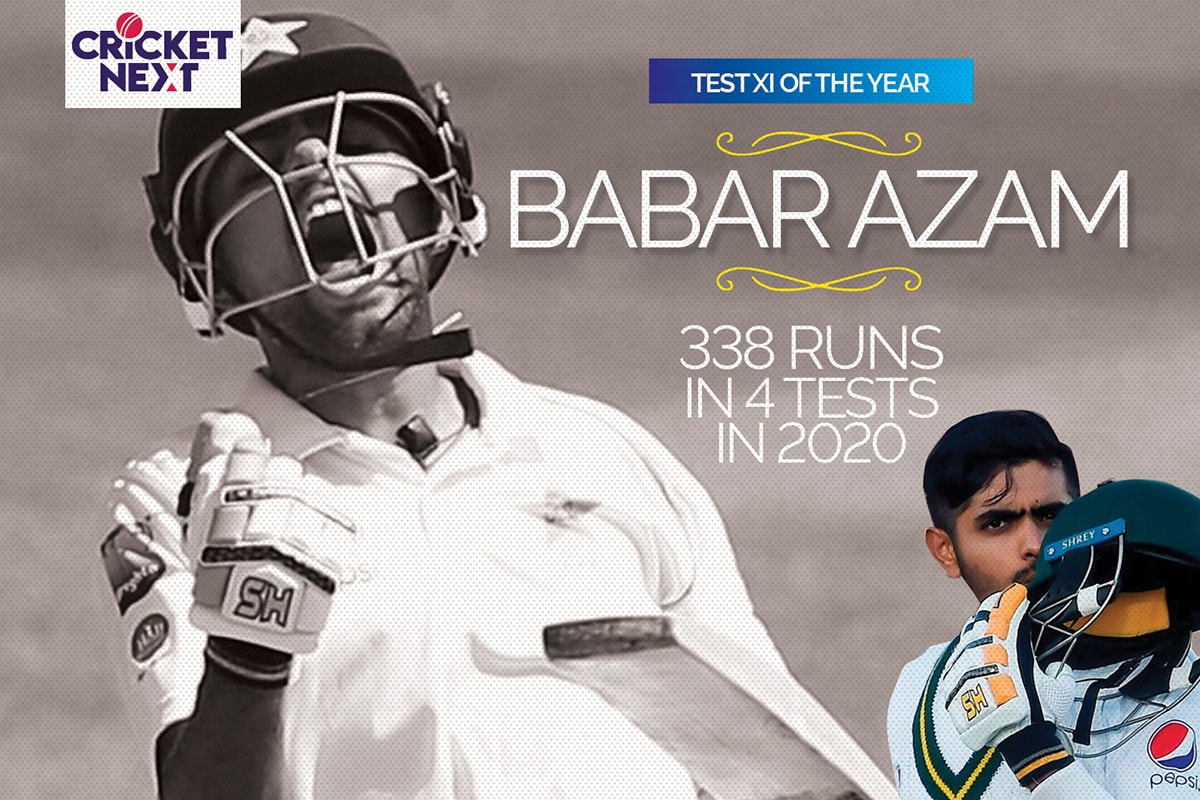 Pakistan’s best batsman, Babar Azam occupies the number 4 position in the XI of the Year. Azam aggregated 338 runs in 4 Tests at an average of 67.6 including a hundred and two fifties in 2020 from the position. He remained unbeaten on 63 off 92 deliveries helping Pakistan to save the third Test against England in Southampton. The best all-rounder in world cricket slots in at number 5. Ben Stokes was the highest run-getter of 2020 with an aggregate of 641 runs in 7 Tests (12 innings) at an average of 58.27 including two hundreds and as many fifties. Stokes recorded both his hundreds from number 5 and scored 462 runs in 7 innings at an average of 66 from the position. He scored 120 in the innings win against South Africa in Port Elizabeth – England led the series 2-1. Stokes then hammered 176 (from 81 for 3) playing the leading role with the bat in the win against West Indies in Manchester.
He also picked 19 wickets at an average of 18.73 and strike rate of 39.6 in the calendar year Jos Buttler was the Player of the Series against Pakistan. Chasing 277 in the last innings in Manchester, Buttler joined Pope at 106 for 4 and was then involved in a match-winning century partnership for the sixth-wicket with Woakes. He scored a fluent 75 off 101 deliveries as England went on to win by three wickets. Buttler also scored 152 in the final Test at Southampton.
Jermaine Blackwood of the West Indies was also a strong contender for the number 6 position. He had smashed a match-winning 95 off just 154 deliveries helping West Indies chase down 200 to win a rare Test in England – in the first Test of the series in Southampton. Blackwood also smashed 104 (from 27 for 4) in a losing cause in the second innings against New Zealand in Hamilton.
THE BOWLERS Chris Woakes fits in at number 7 as the bowling all-rounder. Woakes picked 20 wickets in 6 Tests at 21.65 apiece including a best of 5-50 (in an innings) against West Indies in Manchester. He gave a Player of the Match performance against Pakistan in Manchester. Apart from his 4 wickets in the match he produced a match-winning unbeaten 84 off 120 deliveries (from 117 for 5) helping England chase down 277. It is Woakes ability with the bat that gives him the edge at number 7 over other bowlers who may have picked more wickets in the year. Stuart Broad was the leading wicket-taker of the year with 38 wickets in 8 Tests at an average of 14.76 including a ten-wicket haul (in the match) against the West Indies in Manchester. Tim Southee gave two outstanding performances with the ball in 2020 – he led New Zealand to a massive win over India picking 9 wickets in the Wellington Test. He also picked 5 wickets as New Zealand decimated West Indies for 131 in the first innings of the second Test in Wellington. Overall, he was the second-highest wicket-taker of the year with 30 wickets in 5 Tests at 17.03 apiece. R Ashwin is the only spinner in the team. His selection over Nathan Lyon could raise a few eyebrows but given what has transpired in Adelaide and MCG – where Ashwin has completely outdone his Australian counterpart, the Indian deserves a place in the XI. Ashwin was brilliant in Adelaide and his 4-55 which included the wicket of Steven Smith actually helped India take a first innings’ lead. The off-spinner again took three crucial wickets in Melbourne – of Wade, Smith (again) and Paine and helped India bowl out Australia for less than 200 before returning in the second innings to take the big wicket of Labuschagne. Overall, Ashwin picked 13 wickets in 3 Tests in 2020.
Lyon returned with 14 wickets in the 3 Tests he played in 2020 at an average of 18.78 and economy rate of 2.67. He picked 10 wickets in the match against New Zealand in Sydney but was rather ineffective against India in Adelaide and Melbourne.
The Test XI of the year has as many as 5 players from England and 4 from New Zealand – this should not come as a surprise as they were the two best Test teams of the year. While England won 6 and lost 1 of the 9 Tests they played in 2020, New Zealand won 5 of the 6 Tests they played in the calendar year. There was one player each from India and Pakistan in the XI. There were no players from Australia, South Africa, Sri Lanka, West Indies or Bangladesh.