Be it the final of 2000 between India & New Zealand, the 2002 trophy sharing between India & Sri Lanka or the 2017 India versus Pakistan final, the tournament has been a mode of entertainment for players and fans.

The Champions Trophy has witnessed some memorable matches involving India.  Be it the final of 2000 between India & New Zealand, the 2002 trophy sharing between India & Sri Lanka or the 2017 India versus Pakistan final, the tournament has been a mode of entertainment for players and fans.

Below are some of the ‘Champions Trophy Classics’ fans can treat themselves to:

A young Virender Sehwag proved that he had what it takes to be in the team when India faced England during the ICC Champions Trophy in 2002. With a target of 270 staring at them, India had the task of beating the highest chase at Premadasa stadium which was 244 at that time. Captain Sourav Ganguly and Virender Sehwag came in as openers to lead the chase. India tore apart the England bowling attack with both openers registering centuries in what was one of the most inspiring run chases of the time. Sehwag decimated the English bowlers smashing 21 fours and 1 six in his blistering knock of 126. Ganguly then took the team home with an unbeaten knock of 117 as India cruised to a crushing 8-wicket win.

In another brilliant comeback by Team India under the leadership of Sourav Ganguly, the Men in Blue beat South Africa to enter their second consecutive Champions Trophy final. A good performance by Sehwag at the top and an inspiring knock of 62 from a young Yuvraj Singh helped India reach 261/9 in their 50 overs. South Africa replied brilliantly with Herschelle Gibbs and Jacques Kallis giving a tough time to the Indian bowlers, but once Gibbs retired due to injury, the Indian bowlers bounced back and ran through the South African middle order. Sehwag took 3 important wickets, showing his class with the ball as India restricted the Proteas to 251, thus securing a 10-run victory.

This match proved that an emerging and strong Indian team were determined to make a strong statement to the world. Playing for victory, the young team upset the Australian apple cart, taking the side to the knockout stage of the tournament in 2000. Australia won the toss and decided to bowl first. Indian openers Sachin Tendulkar and Sourav Ganguly gave India a decent start before young Yuvraj Singh played a sensational cameo that yielded 84 to help his team reach 265/9 in their 50 overs. Australia failed to take off and kept losing wickets at regular intervals making it a tough chase for them. Indian seamers didn’t give the batsmen any room and bowled the Australians out for 245 to pocket a 20-run win.

India won the toss and chose to field first when they faced West Indies at The Wanderers Stadium in Johannesburg in 2009. The Indian bowlers complimented their captain’s decision as they rattled the Windies’ batting line-up, sending them back to the hut for just 129 runs in 36 overs. Seamers Praveen Kumar and Ashish Nehra bagged three wickets each with captain MS Dhoni also emerging with one wicket to his credit. India chased down 130 with ease as young Virat Kohli went on to score a comfortable 72 off 104 balls helping India to win in the 33rd over.

MS Dhoni achieved the feat of winning all three ICC tournaments as a captain when India beat England in the 2013 ICC Champions Trophy final. With rain playing as a spoilsport for most part of the day, the game was reduced to a 20-over affair. Put into bat, India were in a spot of bother at 66/5 since the England bowlers made use of the wet conditions. However, Virat Kohli and Ravinder Jadeja managed a decent partnership. Jadeja’s flourish at the end helped India score 129 off their 20 overs. England didn’t have a huge total to chase but the pitch was tricky which favoured the Indian bowlers. With the match taking multiple turns during the second innings, it was sure to be England’s victory with Eoin Morgan and Ravi Bopara going strong but when Ishant Sharma bowled the 18th over, the match turned in favour of Team India. Sharma got both Morgan & Bopara out in consecutive deliveries leaving the lower middle order of England stunned as they collapsed and fell short of the target by 5 runs. India won the Champions Trophy for the second time.

Relive some of the best performances from Champions Trophy 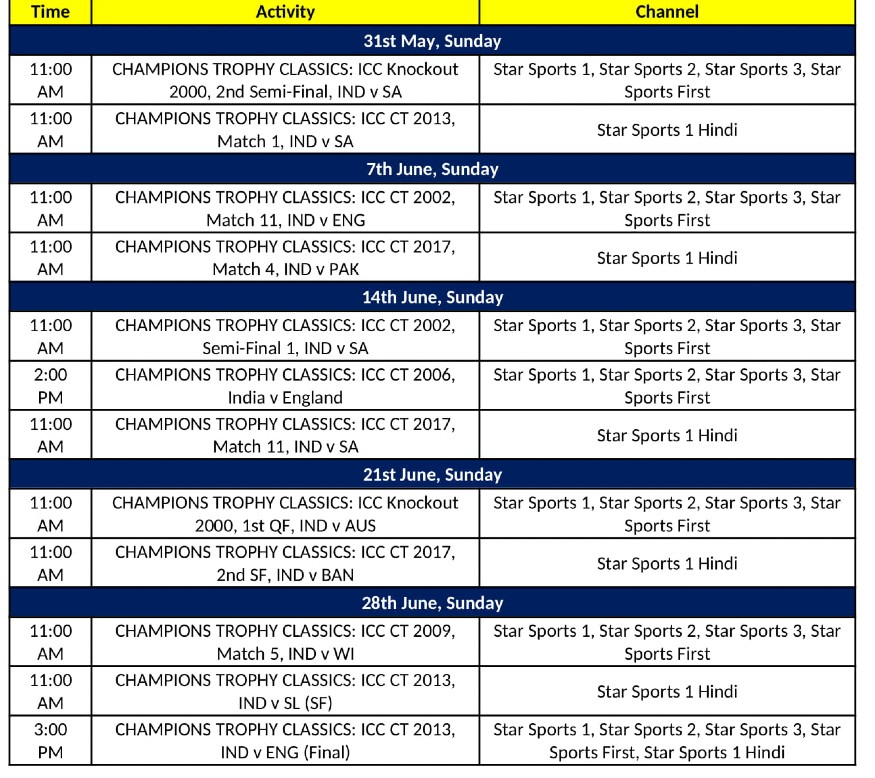