The Mighty Fall of Hashim Amla

Amla just managed to score 510 runs in 2018 at a meagre average of 26.84. Amongst the 55 batsmen who at least scored 300 Test runs in the year, Amla’s average places him at Number 40 – that is how bad it has been for the South African batsman this year.

Hashim Amla registered an unbeaten 63 against Pakistan in the second innings of the Boxing Day Test at Centurion, helping his side to a relatively comfortable six-wicket win in the opening Test of the series.

This was Amla’s second-highest score of the year and only his fifth fifty (in 20 innings). Amla just managed to score 510 runs in 2018 at a meagre average of 26.84. Amongst the 55 batsmen who at least scored 300 Test runs in the year, Amla’s average places him at Number 40 – that is how bad it has been for the South African batsman this year.

Amla did not register any three-digit score this year. This is only the second calendar year (min. 5 innings in a year; the other being 2015) where Amla has failed to score a hundred.

He began the year with three half-centuries against India but they were interspersed with three single-digit scores. During the home-series against Australia, Amla failed to convert starts into any substantial contribution for his team.

He was not able to occupy the crease for any significant length of time. In fact, the average number of balls he faced in an innings dropped from 90 (till 2017) to 62 (in 2018). This means that, on an average, Amla faced 28 balls less in each innings he batted in 2018 – a staggering fall! 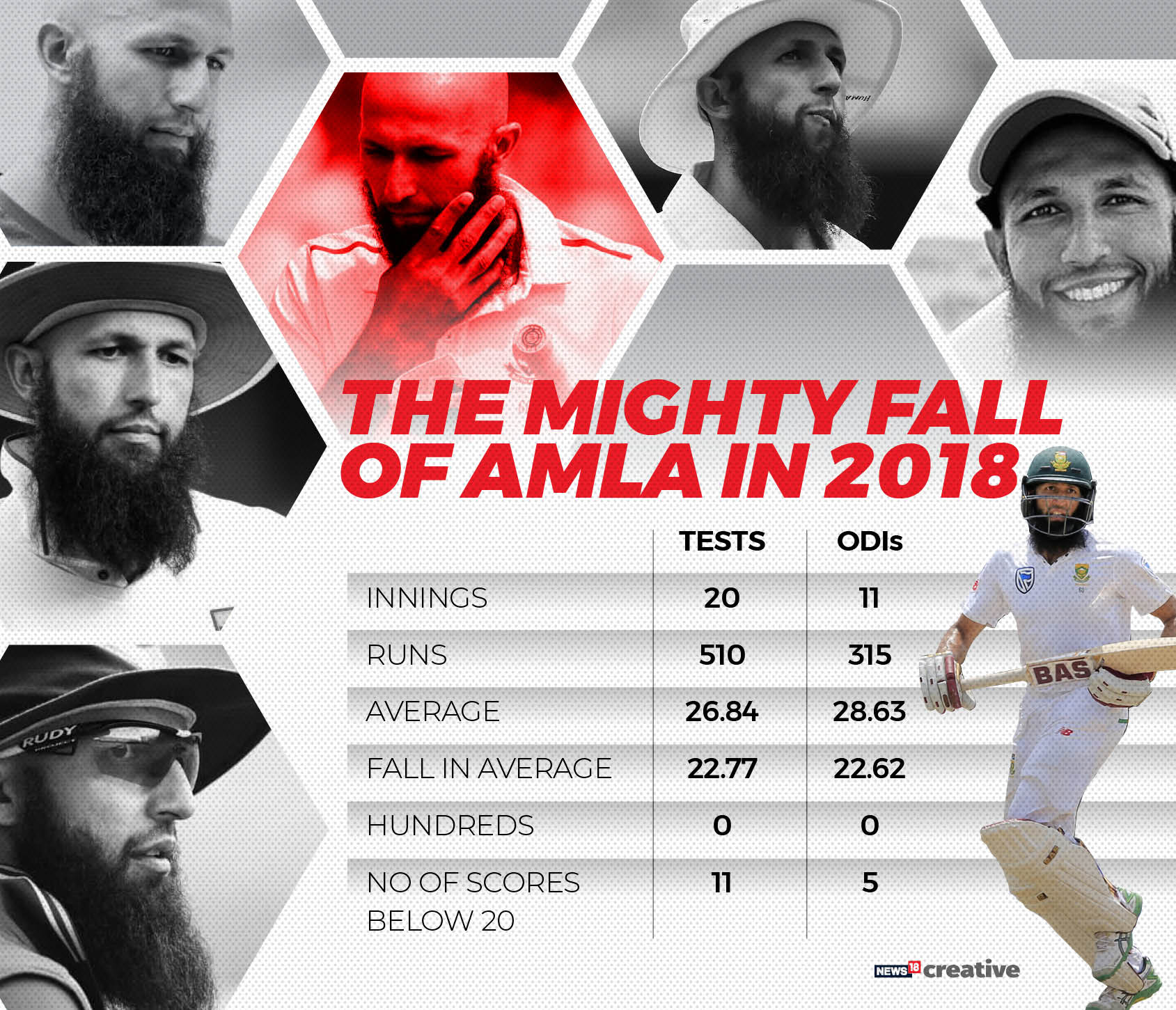 Amla always had a different technique from the usual Test batsmen. He got his bat down from a gully area at an angle. The extra time it took to bring the bat down made him vulnerable to the incoming deliveries but a brilliant hand-eye coordination kept his deficiencies under a mask. But these shortcomings have hit him hard in 2018.

12 of his 19 dismissals in Tests this year were against seamers. He was constantly edging to the cordon, slashing at wide balls with the impatience of a tail-ender.

Amla had a horrendous year in ODI cricket too. He aggregated just 315 runs in 11 innings at a paltry average of 28.63. He registered just two fifties but again, did not score a ton in the format – the only previous year where he went without a hundred in the format was 2009.

It was his worst year by some distance in terms of batting average. He scored approximately 10 runs per dismissal lower than his previous worst performance (average of 38.09 in 2013). His deviation (in 2018) from his average of all previous years was a staggering 24.65 runs. That is how big the drop for Amla has been in 2018. It also shows how good he was all these years.

His average in 2018 places him at Number 58 amongst the 67 batsmen who have scored at least 300 runs in ODI cricket in the year.

It has been a forgettable year for Amla. But he has the technique and the temperament to make 2019 count.

Will he be able to? Time will tell.