This is How 'The Wall' Rahul Dravid Became 'Indiranagar Ka Gunda' 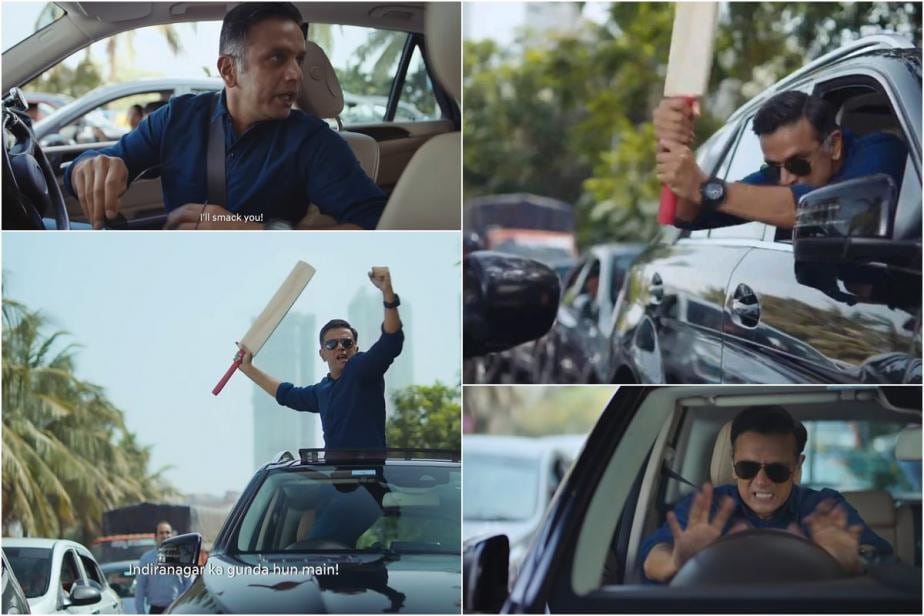 The former India captain, known for his calm demeanour, featured in an ad for CRED, a credit card bill payment platform.

Royal Challengers Bangalore may have won the opening match of the Indian Premier League season 14 against Mumbai Indians on Friday, but it was another Bangalore pride that emerged as the real winner on April 9, 2021. ‘Indiranagar ka Gunda’ Rahul Dravid won over the internet, with his maniac-like behaviour while stuck in Bangalore traffic.

Rahul Dravid, displaying his emotions, particularly anger, shouting at people from his car and even breaking the side mirror of an adjacent vehicle. Him standing through the sunroof and shouting his latest moniker. The world wasn’t ready for this! But Bangalore traffic probably does that you.

The former India captain, known for his calm demeanour, featured in an ad for CRED, a credit card bill payment platform where he showed his ‘darker’ side.

Ayappa KM, director of the commercial has revealed to The Indian Express behind the scene events of this shoot.

“Every time Rahul Dravid would scream, every single time he screamed, he would cover his forehead with his hands. Like ‘What am I doing? Why am I doing this?” Ayappa said.

“A guy out of his comfort zone… That was so entertaining to watch,” he added.

“I think the biggest victory here is that Rahul Dravid looks like a seasoned actor. Let’s be honest, he is known for his cricketing skills much more than his acting skills. So it was very nice to see the feedback, that somewhere we’ve communicated the dark side of Rahul Dravid that doesn’t even exist!”, he told The Indian Express.

Indian captain Virat Kohli too was surprised to see this version of ‘The Wall’. “We were not 100 per cent sure of how it’s going to turn out. So, we had planned a lot of backup physical gags as well. But then we met him in the morning and he seemed very chilled and not very rattled by it. I screamed out a couple of lines to give him a basic idea. And then he got it,” Ayappa said.

“It’s very hard for a non-actor to explode like that.”

He further revealed that they actually tried to put Dravid in a jam.

“We were hoping that he actually gets stressed out and gets angry.”

“We kind of simulated a jam for the shoot where, on one side, you get somebody to just scream at him. So, he reacts to it and also kind of forgets that is in front of a camera. Almost like theatre, we kind of have some improvisational acting with him, and he pulled it off. But he never got angry, that never happened. There were no star tantrums,” Ayappa added.

Tanmay Bhat, who wrote the commercial along with his colleagues at the comedy outfit All India Bakchod, gave a behind-the-scenes glimpse on Twitter.

“Rahul Dravid is one of the nicest, politest people I’ve had the pleasure of meeting. In the brief few hours, he taught me how to correct my batting stance (I do all my cardio while batting in the nets), was kind enough to share the most fascinating cricketing insights and most pleasantly surprising was his incredible curiosity. He asked about punchlines, and delivery, and the science behind writing and directing comedy. Incredible experience. What an absolute legend. (sic)” Tanmay posted.

Rahul Dravid is one of the nicest, politest people I’ve had the pleasure of meeting. In the brief few hours, he taught me how to correct my batting stance (I do all my cardio while batting in the nets), was kind enough to share the most fascinating cricketing insights –

On a day when the IPL 2021 season started, Rahul Dravid and Indiranagar were among the top trends on Twitter.