Two years since Test dethroning, India on the right path

Cricketnext traces the fortunes of the Indian team since that gloomy August afternoon in 2011 when it lost the No 1 spot, and what lies ahead. 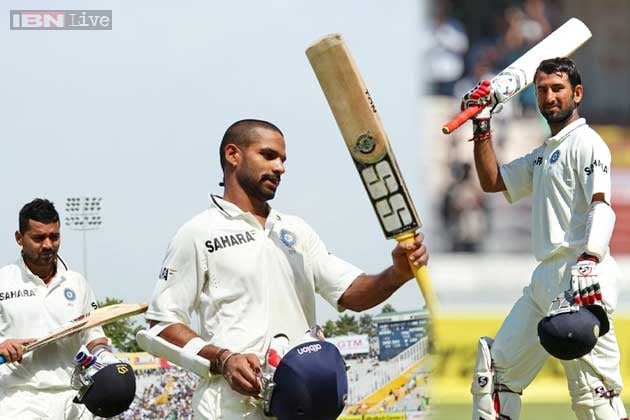 Two years ago to the day, August 13 2011, India surrendered their No 1 Test ranking to England with an innings-and-42-run defeat at Edgbaston. It was a defeat that left the team hurting. How many saw it coming? Edgbaston was followed by another innings defeat at The Oval, which made it 0-4 and saw MS Dhoni's team drop to third place in the ICC Test rankings. It was a new low for a team in transition but not accustomed to being so brutally beaten.

A three-Test series against West Indies at home came in November, following a 5-0 ODI whitewash of England in a silly return series just weeks after the Test drubbing. India won 2-0, narrowly averting defeat on the final day of the third Test in Mumbai. After the tour of England, it was an admirable response from India but as hard as they fought, a favourable series result was always on the cards against middling opposition.

Everyone knew that sternest tests awaited in Australia, but when Dhoni's team departed Indian shores the mood was distinct upbeat. All that changed at the MCG where India, after holding on for three days, imploded on the fourth dat to lose their fifth straight overseas Test. It was a loss that hurt, like Barbados in 1997, Jamaica in 2002, Bangalore in 2005, and Mumbai and Durban in 2006. It really hurt. India had a great chance to win away from home, in the first match of a series, but they flattered to deceive. The repercussions for the rest of the series were crushing.

Defeat set in motion an awfully one-sided series which ended 0-4 again. Eight consecutive Test defeats overseas. How? The batsmen failed, spectacularly, and the bowling lacked bite. Catches were shelled, too. Stripped down, cricket is a game won by good batting, good bowling and good fielding. India were poor in all three departments. It was worse than England because Australia were a poorer side and India's greats just failed to stand up. Indian cricket was at a new low.

The tour of Australia was rounded off by the ODI team failing to reach the finals of the CB Series. In the Asia Cup just after, India again failed to make the summit. But the worry was the Test team, with Rahul Dravid retiring and VVS Laxman on the way out. The hoopla around Sachin Tendulkar's 100th international hundred died down when he scored it in an ODI loss to Bangladesh, but where the Test team would find the strength to lift itself was anyone's guess.

New Zealand visited and were beaten 2-0. Like the win over West Indies, not much was made of it considering how meekly the tourists capitulated to R Ashwin and Pragyan Ojha. Cheteshwar Pujara returned to Test cricket with a bang. There was a bit of positivity going around. But England, ah England. They were the team to beat next.

Indeed, India's quest to become No. 1 in Test cricket started in earnest on November 15, 2012 in Ahmedabad. The buzzword was revenge as the two teams prepared to do battle after an utterly one-sided series in England last summer, with the host broadcaster going overboard with a series of inane advertisements about pungis being bajaoed. India, ranked fifth in Tests, were 14 points behind Alastair Cook's team. They needed to win the four Tests 2-0 to catapult themselves back to third place. England, habitual pipsqueaks against quality spin in Asia, had visions of 3-0 in their eyes in order to reclaim No. 1 from South Africa.

In Ahmedabad, India brushed aside England's challenge - it came from Cook, in ominous manner - and headed to Mumbai with their tails up. Given a rank turner after he called for it, Dhoni oversaw one of India's most embarrassing home defeats of all times. Everyone was stunned, several Englishman included. In Kolkata, another resplendent England performance saw Cook and Co go up 2-1. Suddenly it was India who were pipsqueaks, needing a win in Nagpur to avert a series loss few saw coming. It didn't happen, as a dull draw was played out. For India, a proud run of not losing a home series for eight years had come to an end with an unexpected series defeat.

Questions were asked: what if India had not collapsed on day four in Mumbai? What if Pujara had not dropped Cook on 17 in Kolkata? What if Virender Sehwag had not gotten run out? What if India had played two fast bowlers instead of four spinners in Nagpur? What if Gautam Gambhir had built on his first-innings 60 in Nagpur?

They proved academic. India did not capitalise on starts, they did not bowl better than England, and were led defensively by a captain who seemed resigned to the fact that his team just wasn't the force it once was. The weary, indifferent demeanour on the final day in Nagpur was a clear indication that India had given up, defeated and fatigued.

India's next assignment was four Tests against Australia, itself a team in transition following the retirements of Ricky Ponting and Michael Hussey. This time the mood was subdued as Michael Clarke's squad arrived. Mercifully, Mrs Bhosle, Mewa Ram, Professor Biswas, and the Shukla parivaar had to retire their pungis and bansuris and brass bands. There was much less anticipation from the first Test in Chennai, even though India were seen as favorites.

Chennai ended with India winning before lunch on day five. It was a good win, but still the country was not getting carried away. In Hyderabad, India went up 2-0 after Australia capitulated on day four. In Mohali, Dhoni's men won by six wickets to reclaim the Border-Gavaskar Trophy and claim their first 3-0 win over the Australians. It marked a new low for Australia, who were outclassed in all three Tests. In Delhi, it took India less than three days to seal a historic whitewash.

Success was owed to the men on the field, of course, but also the selection panel members who unlike their predecessors were ready to take harsh calls. Deadweight players were axed, messages were sent out. Of course, this can only really be judged over a longer period of time.

In early July, India moved up from fifth to No 2 in the Test rankings. This ascent can be chiefly attributed to England's inconsistency against Pakistan, South Africa and New Zealand. It is not an accurate reflection of India's success. Should England win the Ashes 3-0 - and it looks as if they will - then they will move to second and India will fall to third.

No matter. India should be focusing their efforts on becoming a respectable Test team once again. A lot has happened since the 4-0 win over Australia. The hit Indian cricket's credibility took during and after IPL 6 has partly been restored by the ODI team's hat-trick of series wins, chiefly the ICC Champions Trophy. A big tour of South Africa awaits later this year, the preparations for which have begun with the naming of several Test and Test hopefuls in the India A squad currently in that country. After that, tours to New Zealand, England and Australia are lined up in 2014. The four toughest countries for Asian teams, in a row. India have their task cut out.

By shedding some baggage, India have begun to regroup. The road ahead will be tough, but the promise shown by Pujara, Shikhar Dhawan, Ravindra Jadeja and Bhuvneshwar Kumar augurs well. That Dhoni seems to have snapped out of his slumber is a big plus. The spinners will be tested outside of India - Ojha has yet to play a Test overseas - and Ishant Sharma and Umesh Yadav are too inconsistent. Tendulkar is 40, looking likely to call it quits in 2014. Virat Kohli is the future, no doubt, and continually evolving.

Those to 0-4 whitewashes in England and Australia have not been forgotten, and neither has the 4-0 win this year transformed Dhoni's team. This team is a work-in-progress, but one on the right path.

Have your say: Do you think India can succeed in South Africa?