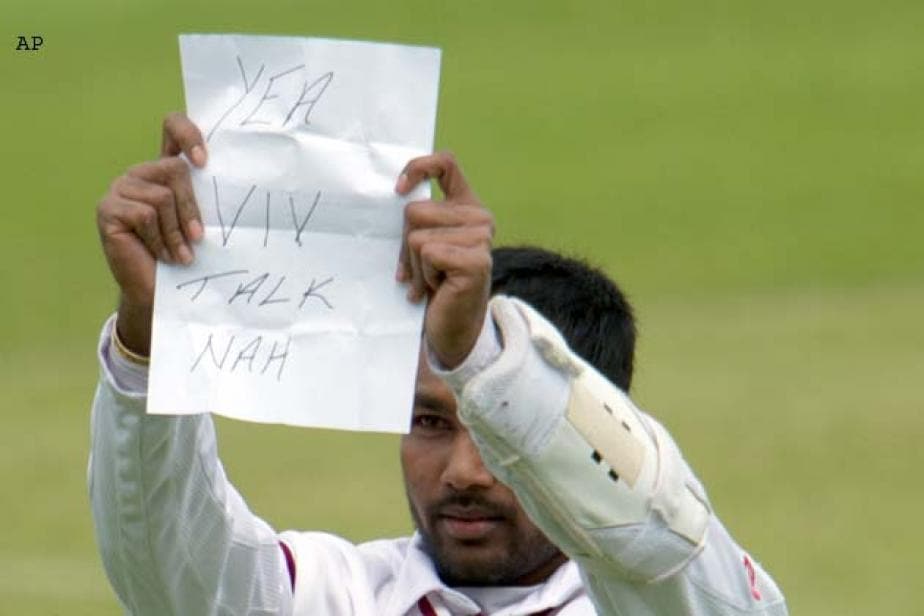 The wicketkeeper batsman got his own back on the legendary West Indian with a ton at Edgbaston.

Birmingham: West Indies wicketkeeper batsman Denesh Ramdin Sunday responded to a criticism from the legendary Vivian Richards in an unusual manner, flashing a note that read 'Yeah Viv talk nah' soon after completing his century against England, in the third Test, here.

A string of poor performance in the ongoing Test series had prompted Richards to describe Ramdin as a "lost guy". Just after completing the second Test century of his career, Ramdin surprised one and all by taking a note out of his pocket and holding it aloft as he pumped his clenched fists. His unusual celebration was promptly caught by the television cameras.

Ramdin has had a poor start to the series against England with the scores of 6, 43, 1 and 6 in the four innings so far. "Ramdin just looks out of sorts. When he first came into the game, I felt he was a huge prospect. For some reason, he has deteriorated in such a big way. Just the way he is walking back, he looks like a totally lost guy," Richards, the former West Indies skipper, had said recently.

Ramdin has been recalled into the side after a gap of two years. His first Test century had come way back in February 2009 when he made 166 against England. Courtesy Ramdin's superb knock and his last-wicket stand with Tino Best helped West Indies get past the 400-run mark in the first innings of the ongoing third Test.

England have already sealed the series by winning the Test matches at Lords's and Trent Bridge.