Home » Cricket Home » News » EXCLUSIVE | ‘I Felt I Could Play The World Cup, But I Was Not There. That Really Hurt Me’ – Venkatesh Iyer
9-MIN READ

EXCLUSIVE | ‘I Felt I Could Play The World Cup, But I Was Not There. That Really Hurt Me’ – Venkatesh Iyer

Once fast-tracked into the Indian team as Hardik Pandya’s replacement, Venkatesh Iyer now finds himself at the NCA recuperating from a freak ankle injury - with the goal of making a return to the Indian side.

When Hardik Pandya was recovering from a back injury, Venkatesh Iyer was tipped as the all-rounder to fill in Pandya’s shoes. After a stellar run with Kolkata Knight Riders (KKR) in the second half of IPL 2021, Iyer stormed his way into the Indian cricket team and played as many as nine T20Is and two ODIs for the country before he was dropped. Pandya’s emphatic return from injury sniffed out Iyer’s chances of a comeback and he was back to the domestic grind for his state, Madhya Pradesh.

The 27-year-old started the Syed Mushtaq Ali Trophy with a bang – 62* and 6/20 vs Rajasthan – and followed it up with scores of 57, 42 and 28 in the next three games. Iyer was building momentum, but a freak injury came in the way of his good run. He had tripped and twisted his ankle and underwent surgery for the same.

The domestic season is all but over for Iyer, but he hopes to return to action early next year and wants to make a return to the Indian dressing room.

In an exclusive chat with Cricketnext.com from Bengaluru, where he is undergoing rehab at the National Cricket Academy (NCA), Iyer talks about his debut, juggling roles of an opener and finisher, working with Chandrakant Pandit and the disappointment of missing the bus for the recently concluded T20 World Cup.

What happened to the ankle?

I just tripped off the staircase, and kind of twisted it (ankle). The entire socket came out… (Ankle) was in a bad position but the surgery went well and it should be good. The rehab is going well and step by step I have started to walk again. It should hopefully be fine in a few months.

You were fast-tracked into the Indian cricket team after one brilliant half of IPL, things moved quite quickly…

Whenever you get the chance to represent your country, I mean there’s nothing more special than that. I am really fortunate to have had that opportunity to do so. I also look at it as something that has given me a path to make it. It is now up to me again to get back on that path and get back into the Indian team. Really fortunate to have had the opportunity to make my debut for India.

How was it adjusting to different roles? Batting at top of the order for KKR and then finishing the innings for India?

I think the transition to the top-order was rather difficult. I have batted in the middle order almost throughout my life. I have batted a long time in the middle-order for the MP team. Middle-order is a place where I felt at home but the opening was actually tougher. But thanks to the domestic setup I got to experience what it was like to open and play on different surfaces. And once you are mentally prepared and mentally accept that you are going to open or play the role of a finisher, then the body just reacts to it.

Yes, it’s extremely different. The skillset for an opener and a finisher. But once you are clear in the head about where and how you need to bat, it becomes that much easier. And on top of that, when you have the backing of the coach and captain. And also when the role is communicated to you with utmost clarity, then it’s just you going out there and putting your best foot forward without worrying about the external noise. The way I was backed, the way things were communicated to me… I felt at home and felt that this was not new territory for me. 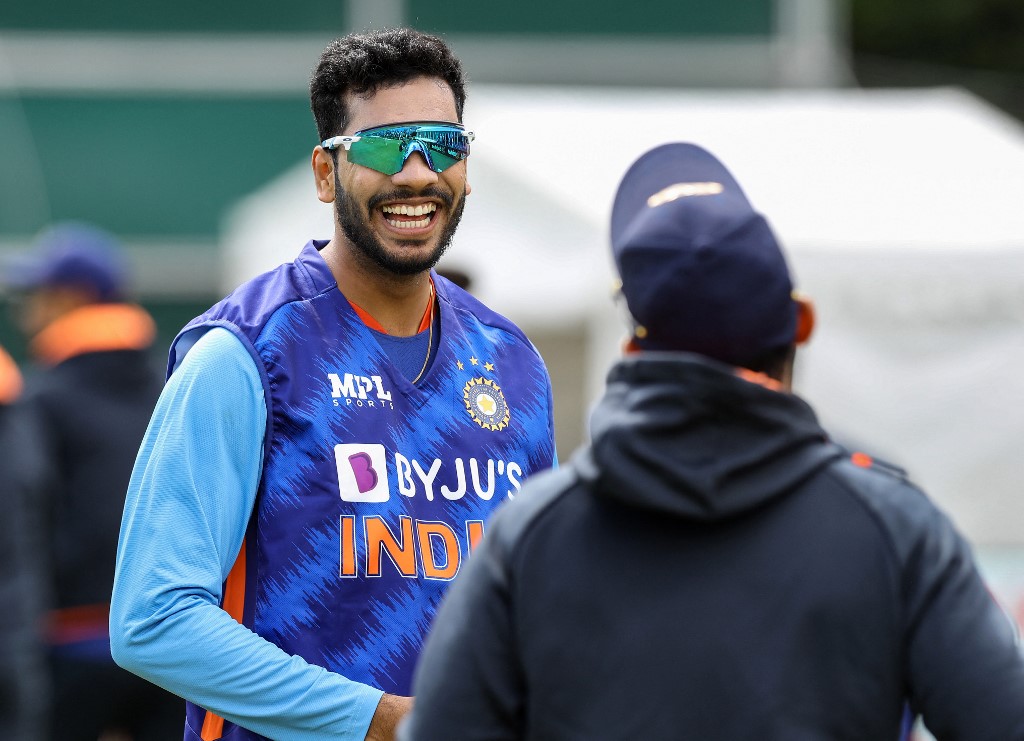 Venkatesh Iyer smiles as he warms up ahead of a match. (AFP Photo)

What was the communication like when you entered the team? Were you told about the finisher’s role?

When I got into the team, I looked at the team and saw three openers already there. Rohit bhai, KL Rahul and Ishan Kishan were already there. So I knew I am not going to open. And then when I met Rahul sir and he asked me how I used to approach the innings when I used to open and it was communicated to me that I will play the role of a finisher. Whenever someone gives you a new role, they also give you a cushion. That was done. Rohit bhai and Rahul sir told me that I would be given a string of games to try and execute that role. And once you have the captain and coach’s backing, the job becomes all the easier.

In the nine T20Is you played, you bowled in only four games. That too not the entire quota. Did you feel under-bowled during your India stint?

To be honest, I did feel a bit under-bowled. But when I think of it from the captain’s perspective, and I have led my state sides in the past, you know when the five bowlers are doing the job then it is not really necessary to use the sixth bowling option. It’s a great cushion to have but when the five bowlers are doing the job then the captain need not look at the sixth bowling option. And that’s what Rohit bhai did. From an individual point of view, I would love to bat 20 overs and bowl my four overs but that really is not possible.

Disappointed with the abrupt end to your stint with Team India?

Who doesn’t want to have a long run with the Indian team? Even though I wanted that, I clearly understood the way Hardik bhai came back. What he did was really amazing. Every team wants to pick the best team for the World Cup. I would have wanted to be there, but again it’s not in my hands. I have always looked at cricket as an opportunity. If am not playing with the Indian cricket team, it’s my opportunity to play in the IPL or represent my state side in domestic competitions. My job is to only do my process right and not worry about selection. I might have been in the team for the T20s and ODIs going on, but I, unfortunately, sustained an injury. I will ensure that when I get to play, I will give my best and not worry about anything else.

Was the management in touch with you during your time away from the team? What was the equation like?

I was in touch with a lot of players. I knew what I had to do to get back into the team. May it be batting, bowling or fielding - everything. (Being) better never stops. I was told to be ready. And as I told you, our set-up is so good that if not India, then IPL, if not IPL, then domestic competitions, if not them - then the local leagues. That is never going to end. And I feel very lucky to operate that way.

Is Venkatesh Iyer mentally and technically ready to continue juggling the role of finisher and opener for his country and IPL team?

Definitely! As a professional cricketer, you always have to be flexible and I always look at pressure and such situations as privileges. So many people in the country and I’m getting to do a particular thing. That is something which is a privilege for me. As a player, you just want to go out there and contribute for your side. That’s all. Be it finishing, be it opening the innings. Be it bowling, fielding or anything. I try and accept it in my mind first. If you accept it in the mind, then the body just follows. The problem happens when you are not accepting it in the first place. I have always accepted the fact that I can be floated up and down the order at any time. In this Mushtaq Ali Trophy, I played three games and batted at three different positions – No.3 in one, No.4 in one and No.5 in one.

Was it a conscious call to try various things during the Syed Mushtaq Ali Trophy? Like bat at different positions or did it kind of happen because of the game situation and demands?

A bit of both to be honest. Before the tournament only, Chandu (Chandrakant Pandit) sir spoke to me about showing to the world how versatile I can be while batting in different positions. Had I not injured my leg, I was going to open in the next game. That was really great and I felt good. Was scoring in all games. That shows that I can bat in different positions. And see performances don’t really matter as even If I hadn’t scored in those games, but if I had made the effort to walk in and perform a particular role, that itself is a victory for me.

How excited are you to reunite with Chandrakant Pandit at KKR now?

It’s just going to be a continuation of what’s going on right now. Chandu sir is our domestic coach, he has worked on all aspects of our game. Right from aspects of fielding to batting technique. I am extremely happy that someone of his stature, who has dominated domestic cricket for such a long time is finally getting to showcase his skills on the IPL level. I am really excited from that point of view and just like everyone else, I am excited about how he will take charge of KKR. To be honest, I really can’t wait for the IPL.

Any time frame you are looking at for a return to action?

I am not really looking at a time frame because it’s the left leg and it’s going to bear 10-15 times my body weight when I bowl. I am extremely fortunate to get the treatment and facilities here at the NCA. They haven’t fixed a timeline because doing that would add pressure on me. I am really hopeful about getting back on the field sometime in January. But I feel February could be the right time to start.

Mission 2024 has well and truly begun for the Indian cricket team. Have you made it your goal/target to return to cricket?

Absolutely not. Right now, my only focus is to go to the gym and do whatever exercises I am told. I don’t look at things too far ahead. When I was called into the Indian cricket team, I felt I could play in the World Cup and then I was not there. That really hurt me. I don’t want to put myself in a position to think about something which is really far away from me. If things are to happen, they will happen. The only thing in my hands is to stick to the process, get better every day and leave the rest to god.