Sparks will definitely fly at the Maharashtra Cricket Association Stadium when two of the greatest modern-day Indian skippers will collide in the ongoing edition of the Indian Premier League, on Saturday.

New Delhi: Sparks will definitely fly at the Maharashtra Cricket Association Stadium when two of the greatest modern-day Indian skippers will collide in the ongoing edition of the Indian Premier League, on Saturday. Mahendra Singh Dhoni’s Chennai Super Kings will lock horns against Virat Kohli’s Royal Challengers Bangalore in a mouth-watering clash in Pune.

This is the second time these two teams will clash against one other this season as in the previous clash, CSK beat RCB by 5 wickets at the M. Chinnaswamy Stadium in Bangalore in the 24th match of IPL XI.

Skipper Kohli will look to arrest his team’s bad run against the two-time champions as they have faced defeats in their last five against Dhoni’s yellow brigade. The last time RCB defeated CSK was in 2014 at Ranchi, where they won the match by 5 wickets. Since then, CSK have won all of the last 5 encounters against RCB. 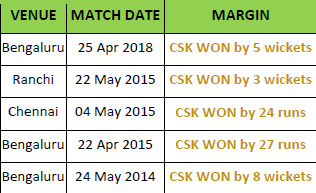 Not just this, but CSK have entirely dominated this fixture over the years as they have won 13 out of the previous 21 meetings with a win percentage of 65.00%.

CSK have won 13 matches against RCB, which is their most against any active opponent.

As for RCB, with 13 losses to their name against CSK, they have the second most number of losses against any active IPL team — joint with KKR.

Therefore, Kohli will look to end his team’s poor run against Dhoni’s troops and the one thing that will be on their side is recent form. While Bangalore clinched an impressive win in their last match against Mumbai, Chennai on the other hand succumbed to a loss against Kolkata.

Meanwhile, as far as the two players’respective personal form is concerned, both Kohli and Dhoni have been scoring runs for fun so far in the league. While the RCB skipper stands third in the list of most runs scored in the IPL, MSD takes up the fifth spot.

Kohli will definitely look to avenge the Bangalore loss and end his team’s losing streak against Dhoni in the process as well. The two have done it all together on the international stage for ages but in the IPL, the bragging right is all that matters and these definitely two know that.