Virat Kohli vs MS Dhoni vs Sourav Ganguly: Who is The Greatest India Test Captain?

Virat Kohli is the most successful Indian Test captain in history and miles ahead of both Dhoni and Ganguly. Under him, India has seen unprecedented domination at home and also won their maiden series in Australia. He led India to be the number one ranked ICC Test team for five years in a row and top the charts in the inaugural World Test Championship.

Sunil Gavaskar lavished big praise on the Indian cricket team under Virat Kohli stating that it was the best Test team produced by the country in its cricketing history while comparing their domination to that of the great West Indian teams under Clive Lloyd and Viv Richards and the Australian team under Steve Waugh. Is this team under the leadership of Kohli that good? Where does it stand in comparison to two other great captains of the recent past - MS Dhoni and Sourav Ganguly?

Virat Kohli has led India to victory in as many as 36 of the 60 Tests he has captained. His win-loss ratio of 2.571 is the highest in India’s Test cricket history and way ahead of the next best, Sourav Ganguly (1.615). MS Dhoni is at number three on the list with a win-loss ratio of 1.5. Even in terms of Win Percentage, it is Kohli who is at the top of the charts at 60%.

Kohli has a higher win-loss ratio than some all-time great captains in Test cricket. The Indian captain trumps the likes of Hansie Cronje, Javed Miandad, Peter May (led one of the most successful England sides in the 1950s), Mark Taylor, Richie Richardson, Graeme Smith and Imran Khan! These are some big names who led their country dominating periods and eras and for Kohli to leave all of them behind is a staggering record and a credit to his captaincy. 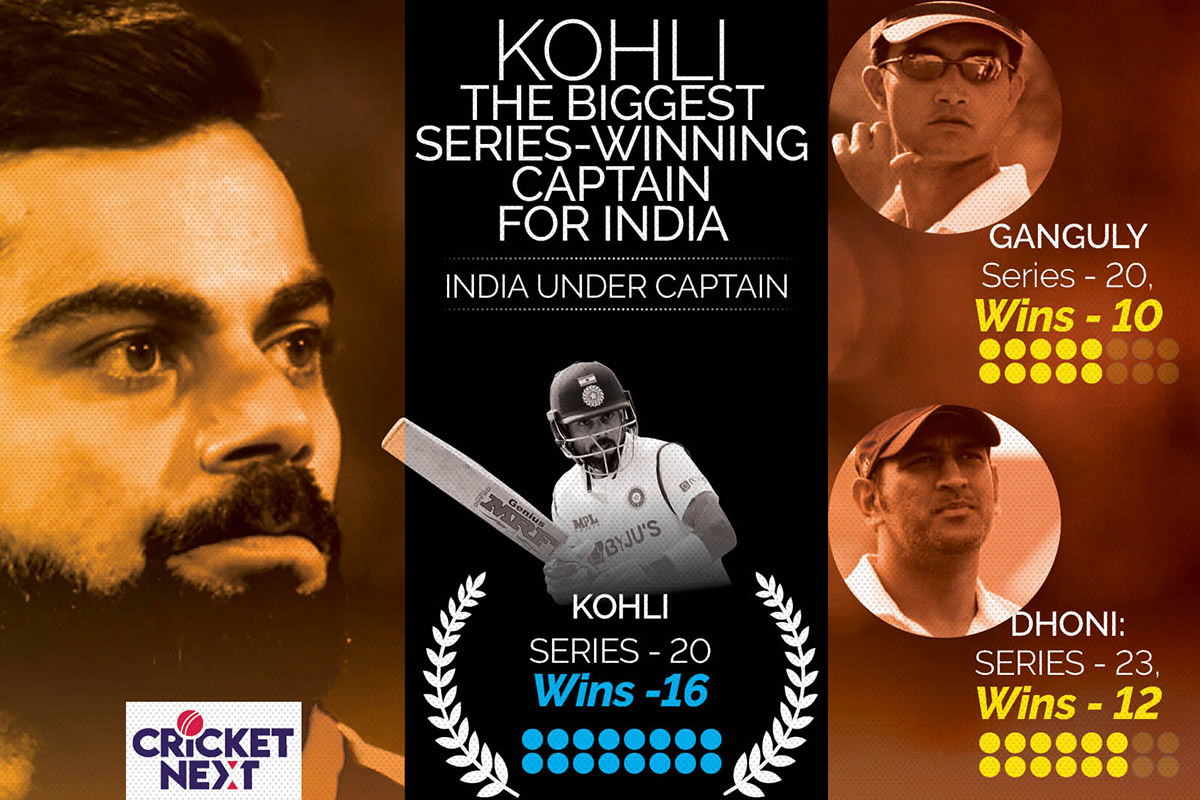 Kohli took over the Test captaincy from Dhoni in exceptional circumstances in the middle of the Australian series Down Under in 2014. Since then he has led India to victory in a stunning 16 of the 20 series he has been in-charge. These are mind-boggling returns for any captain anywhere in any era of Test cricket history. This period includes an unbeaten run of 10 series (including 9 wins in a row) starting from a 2-1 win in Sri Lanka in August 2015 to a 1-0 win against the same opponents at home in November 2017.

India had a maximum streak of four unbeaten series under Ganguly. Under Dhoni, India were undefeated for 12 consecutive series from April 2008 till June 2011 but the winning streak extended to just 5 series.

India have been dominant at home in Test cricket since their 3-0 sweep against England in 1993 when Kumble, Raju and Chauhan spun the hosts to victory. They did not lose a Test series at home in the entire decade of the 1990s. Ganguly continued the home domination started by Azharuddin and India under Dhoni took it to another level. But what the country has witnessed under the leadership of Kohli is unprecedented in history! India under Dhoni won 9 of the 12 home series, drew two but significantly were beaten 2-1 by England in 2012. Ganguly led India to six series wins at home, there were two draws but again a loss to Australia in 2004.

Amongst the 38 captains who have led their team in at least 20 matches at home, Kohli’s Win Percentage of 76.67% is the highest in Test history! He is closely followed by Steve Waugh (75.86%), Ricky Ponting (74.36%) and Kane Williamson (72.73%). This, in a way suggests that India has been a more dominating team at home under Kohli than the great Australian team under Waugh and Ponting in their own backyard or the all conquering West Indian teams under the leadership of Lloyd and Richards in the Caribbean!

India has won 13, lost 12 and drawn just 5 overseas matches under the leadership of King Kohli. While Ganguly is widely credited for giving the Indian team some ‘attitude’ and reviving their dwindling fortunes outside of India, it is Kohli who has the highest overseas win percentage of 43.33% amongst all Indian captains. India has won 13 away matches under Kohli - again leaving Ganguly behind (11) on this count.

The biggest triumph under Kohli was the historic and maiden 2-1 series victory in Australia in 2018-19. It started a new chapter in Indian Test cricket history. No Asian team till then had won a Test series Down Under - that is how tough it is to win in Australia. Although Kohli was not at the helm, it was the team he had created and the character and confidence he had built in the dressing room inspiring his boys through his performances that led India (under Rahane) to a sensational successive series triumph against all odds with a second-string attack in Australia in 2020-21.

Unlike before, the team under Kohli gave a fight even when it lost in the SEA countries (South Africa, England, Australia). India won a Test in Johannesburg in 2018 and had also tasted success at Trent Bridge a few months later. The 2-0 loss in New Zealand in 2020 was the only series where India under Kohli were completely outplayed.

Ganguly earned creditable draws for India - in England in 2002 and Australia in 2003-04 but was beaten in New Zealand and South Africa. The biggest blot of Dhoni’s Test career was the successive whitewash in England (4-0) in 2011 and Australia (4-0) in 2011-12 which started his downfall as a Test captain.

The Number One Team In The Inaugural World Test Championship

India, under the leadership of Kohli, ended as the number one team in the inaugural edition of the WTC (2019-2021) winning 12 of the 17 matches it played in the tournament and thereby making the final.

It created history by emerging as the number one Test team in the world for a fifth consecutive season when the latest rankings were released by the ICC in their annual update on May 13. India first won the ICC Test Championship under the captaincy of Dhoni at the end of the ICC annual year 2010 and went on to retain it in 2011 too. But to do it for 5 consecutive years speaks volumes of the consistency and excellence of this team under Kohli.

Kohli faced a herculean task to re-build the team when he took over from Dhoni in 2014. The team was placed as low as number 7 back then.

India always had very talented batsmen and match-winning spinners in home conditions. The difference is the emergence and dominance of four world-class pace bowlers under the captaincy of Kohli - it has enabled India to not only continue their ruthless domination at home but also win consistently away from the country in lands where a few earlier teams almost went as tourists.

But like every talented bunch of soldiers require a good marshal to lead them in battle, the gifted bunch of Indian batsmen, spinners and fast bowlers also needed a Kohli at the helm to motivate and inspire to bring out the best in them.

The ICC World Test Championship title will be a fitting end to this glorious and unprecedented run in Test cricket for India under Kohli.