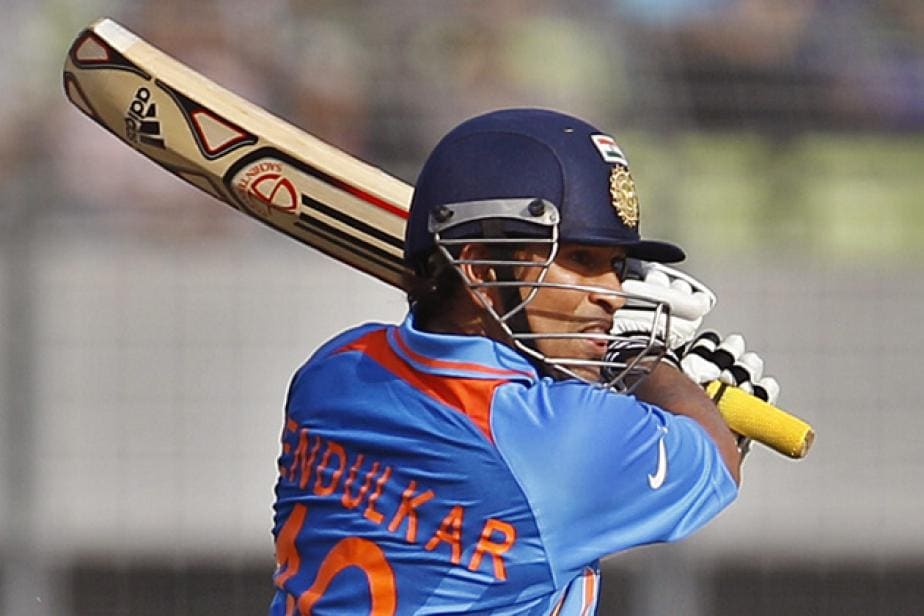 Also, Vivian Richards, Ian Chappell and Rahul Dravid were among those who paid glowing tributes to Sachin.

New Delhi: Australian spin legend Shane Warne pleaded for an end to the talk of Sachin Tendulkar's retirement as he joined the international chorus of appreciation for the iconic Indian cricketer who scripted history by completing a century of international tons on Friday.

"Congrats to Sachin on reaching his 100th international 100 - just awesome buddy Please press no retirement Q'S and let Sachin enjoy the moment," Shane Warne tweeted after Tendulkar reached the milestone against Bangladesh in an Asia Cup match in Mirpur yesterday.

The 114-run knock against Bangladesh in an Asia Cup match in Mirpur ended a year-long wait for the 38-year-old star batsman, whose 99th ton came during a World Cup match against South Africa in March 2011.

Tributes continued to pour in for the veteran from other parts of the world as well, with former England captain Tony Greig calling him a fine ambassador of the game.

"Just woke up to the wonderful news that Sachin has made that century. Great player and wonderful ambassador for our great game," he said.

England batsman Kevin Pietersen, who is in Sri Lanka for a series, said the effort was way beyond imagination.

"Seriously has anyone actually thought about what Sachin has done here?? 100 100's!!!! Absolutely unbelievable..Batters dream!" he said.

Tendulkar's former teammate and the recently-retired Rahul Dravid marvelled at his genius.

"What stands out in an exceptional career of unbelievable achievements is Sachin Tendulkar's ability to change, adapt and mould his batting according to the conditions around him. What makes him a phenomenal player is that he has done so many things, be it scoring the highest number of Test and one-day runs or scoring a century of international centuries," he said.

"What he has done is set a benchmark for future generations which, probably, would be almost impossible for anyone to emulate. He has created a new milestone, which to my mind, is like Don Bradman's average of 99.94, the most memorable feat that any cricketer has achieved. Like overtaking Bradman's average appears almost impossible today, Sachin's century feat too will in all probability stay forever."

"The skill, the tenacity and the competitive urge still flows freely through the veins of Tendulkar. He seemed destined to conquer the batting Mount Everest from the moment it was said about him at the young age of 17, (when) Tendulkar scored his first Test century at Old Trafford," he said.

"The fact that Tendulkar has handled fame so well and maintained an attacking outlook throughout is a tribute to not only his skill but also his wonderfully alert mind. Considering the length of his career and the fact that he was able to renew his attacking desires, I would now rate Tendulkar slightly ahead of Brian Lara and comfortably in front of a fading Ricky Ponting."

West Indies legend Viv Richards described Tendulkar as a "genius" when it comes to ability and a "Trojan" when it came to work ethics.

"I believe Sir Donald Bradman is the greatest of them all, but seeing Tendulkar bat, I can say that when he is in top flight, in a variety of conditions, I have seen the best."

"As a sportsman, I know how damaging an injury can be. For a batsman, an elbow injury and corrective surgery could be akin to a professional death knell. But the way Sachin overcame those setbacks and played at the highest level with unmatched distinction is special."

"Friday's century was a testimony to Sachin Tendulkar's self belief and his unwavering focus. Many of his contemporaries who were spoken of in the same breath did not have the hunger and focus, which is why Sachin stands alone at the summit. And let it not be forgotten that he is no dour batsman, he still plays thrilling shots and has entertained more fans than any batsman has in the history of the game. All this with humility, bearing the burden of his team's batting and the expectations of his millions of fans," he said.

"I think Sachin has earned the right to decide when exactly he wants to put down his bat. He is mature and sensible individual and more importantly a very proud cricketer. He is not going to continue if he feels he is not performing up to his standards," he added.

"...I guess chant today goes Sacccchiiiinnnn, Sachhhhhhiiiinnn.. Hmmm I have been chanting that for twenty years."

"Sachin is a player by which all others are measured over the last 10-15 years, and for him to go out and get a hundred hundreds is an amazing achievement without precedent - it's unlikely to be achieved again," he told BBC Sports.

Former England captain Nasser Hussain said even if the 100th ton had not come about, Tendulkar would still have remained a great player.

"Don Bradman is sometimes remembered, unfairly, as the batsman who did not quite average 100 in Test cricket. And there was a danger, as we all waited for Sachin Tendulkar to reach three figures again, that he would be remembered for the one international century he did not score, rather than the 99 he did. That would have been a shame - and completely unjust," he said.

"You could tell after he tucked that single off his pads on Friday in Dhaka how much it meant to him. He's been criticised in the past for being a closed book, a guy who doesn't show his feelings too easily. But you could see the more human side of him after he took his helmet off to celebrate."

"...he's done it and no one can ever take the achievement away. Finally, he can move on. The mother of all monkeys has been removed."

"When Sachin Tendulkar ended 369 days of waiting for his 100th international century, we witnessed a player leaving the mark of true greatness on the game," said Vaughan.

"Only the true greats in sport set an unreachable benchmark and his 100 international centuries is Tendulkar's equivalent of Sir Donald Bradman's Test average of 99.94."

"Tendulkar has played international cricket since 1989. I can't see a modern player lasting that long. A hundred international hundreds. Just take a couple of seconds to think about that. I thought I had a decent career to score 18," Vaughan wrote in his column in the Daily Telegraph.

The former English player felt that the iconic batsman would not hang up his boots as he loves the game.

"What does Sachin do now? Go for 110? 150? Or will he quit? I think he will play on. He loves the game so why should he retire? What else is he going to do? He is in a fantastic position. He can play for the love of the game. He doesn't need the money."

"It is like going back to being aged 11. He can be carefree and enjoy his remaining time, especially now the 100 hundreds pressure is off his back."

Stating that just being Sachin Tendulkar for a day would exhaust most people, Vaughan said, "Mastering your game, feeding the hunger for runs and keeping your passion for practice and all those hours working on your game away from the middle are the pillars on which their historic careers have been built."

Vaughan said he would want his son to play like Sachin. "Obviously he is in the top three batsmen in history of the game. He is an artist. Pretty, technically correct and everything you would want to look like at the crease. If you asked me how I would want my son to play, I would answer 'like Sachin.'"

"His strokeplay is pleasing on the eye. I've said before that if you had a pencil and paper, and drew the perfect picture of batsman at the crease, then you would sketch out Sachin."

The 37-year-old also said that Tendulkar's main focus has always been on scoring runs, and that was why he probably could not be successful as a captain.

"When a captain is up in the morning, his first thought process is about the team - 'How do I get him playing right and what is the strategy of the day?' After all that, you then start thinking 'how am I going to score my runs?' Not Sachin. It is all about runs. And keeping the fans happy," he said.

Vaughan said Tendulkar, while waiting for his century for an year, showed how sport is played in the mind.

"He is human and we have seen that in recent months as he waited for his 100th century. During that period he has been a walking model of how sport is played in the mind. He has clearly felt the pressure of expectation and it has permeated into his game for the first time in his career."

"Even with all his experience, he looked human. It's natural to panic at times but he still made starts and generally only faded when the nerves crept in as a hundred loomed. It has been tough to watch his pain at times because he is such a nice bloke. He is so placid, humble and easy to talk to," said the former player.

"Huge congratulations to Sachin Tendulkar on your 100th international 100. Very well deserved mate. One of the greatest batsmen of all time," McGrath, who has had several on-field duels with Tendulkar, tweeted.

"Congratulations to 2 Indian Cricket Legends, Sachin Tendulkar & Rahul Dravid. I have so much respect for you both," he said.

Tendulkar completed a century of hundreds - 49 ODI and 51 Test - during an Asia Cup match against Bangladesh in Mirpur.

"Congratulations to Sachin on achieving his 100th hundred," tweeted the bowler, who is currently in the West Indies with the team.