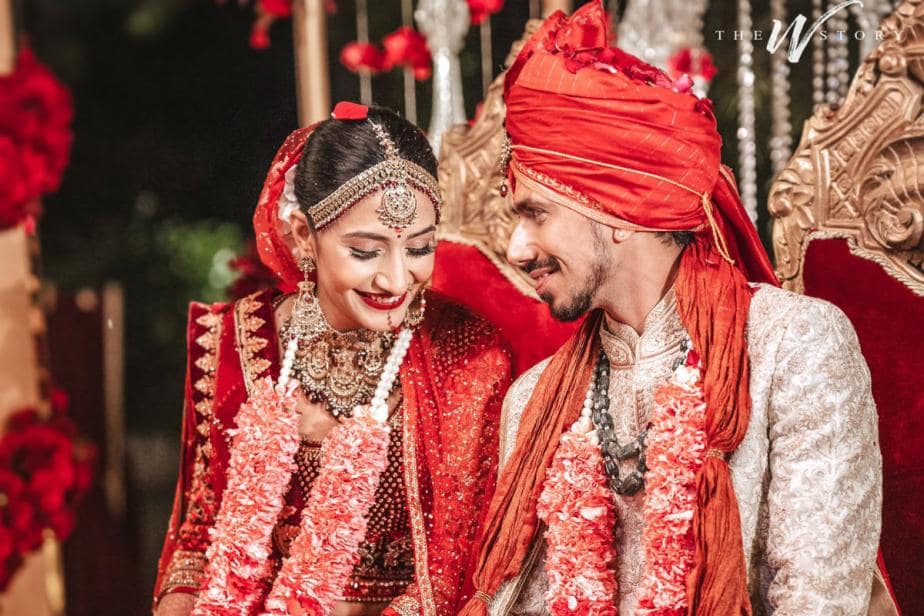 Indian cricketer Yuzvendra Chahal and YouTuber Dhanashree Verma tied the knot on Tuesday, December 22. The couple married in a Hindu ceremony at the Karma Lake resort in Gurugram. Chahal and Verma took to their social media handles to make the announcement about their wedding.

The couple took to their social media handles to announce their wedding. Verma took to Instagram, shared photos from the wedding and wrote, “22.12.20. We started at “Once upon a time” and found “Our happily ever after,” coz’ finally, #DhanaSaidYuz for infinity & beyond!!”

Chahal too took to the photo-video sharing platform and shared few pictures with the same caption.

In the photos, Verma can be seen decked in a maroon lehenga, while Chahal complemented her in an ivory sherwani and a maroon turban. Their post racked up lakhs of likes within hours of posting and many celebrities, sports personalities congratulated the newlyweds.

Among the firsts, former Indian cricketer and Kings XI Punjab (KXIP) coach Wasim Jaffer took to twitter to congratulate them. Jaffer in his own style wrote, “No matter how many matches you go to, she’ll be the match you’ll always come back to. Congratulations @yuzi_chahal and Dhanashree.”

No matter how many matches you go to, she'll be the match you'll always come back to. Congratulations @yuzi_chahal and Dhanashree 🙂 https://t.co/RbnEdSeCPq

Indian cricketer and opener Shikhar Dhawan too wished his teammate for his new innings in life. Dhawan shared a photo the three on his Instagram handle.

The BCCI also wished the leg-spinner on Twitter, wishing them lifetime of happiness.

Congratulations @yuzi_chahal and Dhanashree. Wishing you both a lifetime of happiness 🙏🙏 https://t.co/Xstzkpez4j

Congratulations @yuzi_chahal and Dhanashree. Wishing you both a very happy married life & a lifetime of togetherness! pic.twitter.com/mprIJqkbxe

Chahal and Dhanashree got engaged in August this year. Following the lockdown, the couple started off as a student-teacher relationship in April this year as Chahal decided to learn dancing. It led to friendship and a connection later.

Chahal was part of India’s ODI and T20I teams against Australia. While India lost the ODI series, they bounced back strongly to win the T20I series.