Arjun Tendulkar will be hoping to get a game for MI. (Pic Credit: IG/arjuntendulkar24)

Arjun has been training alongside his MI teammates ahead of the resumption of the T20 league and will be hoping to get a game in UAE.

Mumbai Indians have started their preparations for the second leg of IPL 2021 in the UAE with the legendary Zaheer Khan overseeing their training session. In a video shared on defending champions MI’s twitter handle, Zaheer can be seen instructing his players to not focus on variations and instead on getting the volume up.

Arjun Tendulkar, son of the legendary Sachin Tendulkar, who was bought by at the auctions earlier this year, was also seen speaking with Zaheer.  The young fast bowling allrounder is yet to make his IPL debut though.

Arjun has been training alongside his MI teammates ahead of the resumption of the T20 league and will be hoping to get a game in UAE.

Zaheer, who is also Director of Cricket operations of MI , shared with Arjun some tips.

Bowler Dhawal Kulkarni has also been sharing his experience and knowledge with the 21-year-old pacer.

Arjun shared a few pics from the training session on his Instagram Stories. 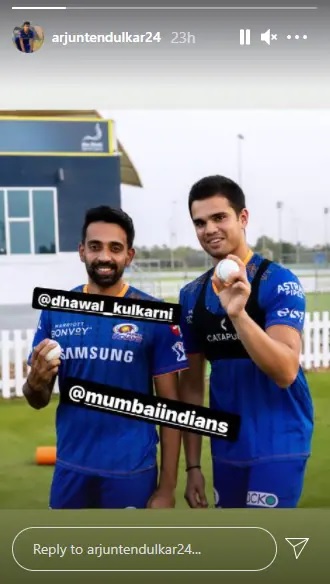 Meanwhile, Rohit Sharma’s MI will be taking on Chennai Super Kings in their first match of the second leg. Several of their squad members have already reached UAE and have completed their quarantine period.

The players have been sharing pictures/clips on social media of their training sessions at the Sheikh Zayed Cricket Stadium in Abu Dhabi.

Their match against MS Dhoni-led side is scheduled for September 19 at the Dubai International Stadium.