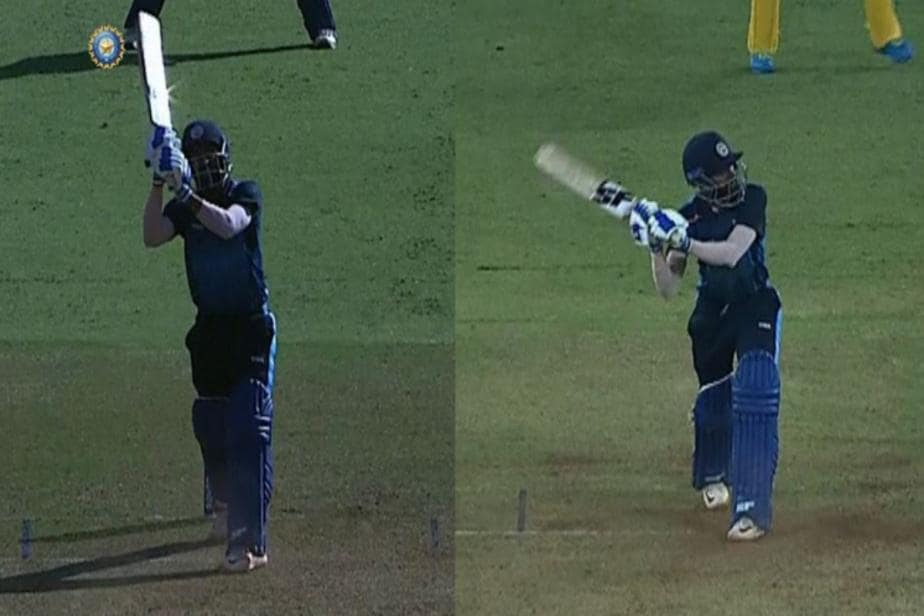 The helicopter shot in Cricket reminds one and all of none other than former Indian cricket captain Mahendra Singh Dhoni, the man who swung the bat to dispatch the ball into the crowd.

The Syed Mushtaq Ali Trophy, which concluded on Sunday, came alive twice when Baroda cricketer Vishnu Solanki played two helicopter shots. First, to score the winning runs against Haryana in the quarter-final, and then in the final to take his side to a respectable total after an initial collapse against Tamil Nadu.

Even though Baroda lost the final, there were many positives, with Solanki arguably the biggest, showcasing his talent in the domestic T20 championship. Solanki played a blinder against Haryana a couple of days ago, smashing 16 of the last three balls to take his side home. Baroda needed 15 off the last three deliveries, and Solanki ended the game with 6,4,6, the last being a helicopter shot straight down the ground.

The final was equally difficult, for Baroda were once struggling at 36/6 but Solanki played a 49-run knock to take his side to 120. When BCCI shared a video in which Vishnu Solanki was seen emulating Mahendra Singh Dhoni, cricket fans on Twitter went crazy, lauding the Baroda right-hander for his brilliant effort. Now, with the IPL auction just around the corner, Solanki's performance in the T20 tournament has put him in the spotlight.

Vishnu Solanki creamed two sixes off helicopter shots, one in the #QF3 against Haryana and one in the #Final against Tamil Nadu. 👌👌 @Paytm #SyedMushtaqAliT20 #TNvBDA

A Twitter user even tagged MS Dhoni and asked his views on how well Solanki executed the shot considered synonymous with the former Indian captain. "With five runs needed off the last ball, Vishnu Solanki hit a helicopter shot for six to send Baroda into the #SMAT2021 semifinals. @msdhoni, please let us know your thoughts," he said.

With five runs needed off the last ball, Vishnu Solanki hit a helicopter shot for six to send Baroda into the #SMAT2021 semifinals. @msdhoni, please let us know your thoughts 😊

Here are some more reactions to Solanki's heroics in the Syed Mushtaq Ali Trophy:

Vishnu Solanki does it for Baroda. 15 needed off 3 balls. He hits 6 4 6 off those three balls. And the winning Six came with a helicopter shot. Wow!

You beauty Vishnu Solanki 15 needed of last 3 balls smacked them out of the park! #SMAT2021

Vishnu Solanki did a Dhoni-esque helicopter shot on the final ball!

He knew match was sealed as soon as he hit it. Proper thriller at #SyedMushtaqAliTrophy2021.

"I used to see Mahi bhai. I also thought I should try something different. I thought it will be apt for T20 cricket." - Vishnu Solanki of Baroda. pic.twitter.com/jdCMe8rBUv