The legendary captain is celebrating his 41st birthday today

Mahendra Singh Dhoni is celebrating his 41st birthday today. Social media is flooding with wishes for the legendary cricketer who is widely acknowledged as one of the finest captains in the history of the game.

Dhoni celebrates his birthday in grand fashion with friends and family in UK with his wife Sakshi Singh sharing a clip of smiling Thala cutting the cake. Interestingly, India wicketkeeper-batter Rishabh Pant also attended the party.

Dhoni and his Sakshi are in UK where the pair recently celebrated their 12th wedding anniversary as well. They got married on July 4, 2010.

Having made his debut for India in 2004, Dhoni went on have a storied career where he not only excelled as a batter and a wicketkeeper but also won plaudits for his intelligent cricketing brain as he became the first and only captain to win all three major ICC trophies including T20 World Cup, ODI World Cup and Champions Trophy. 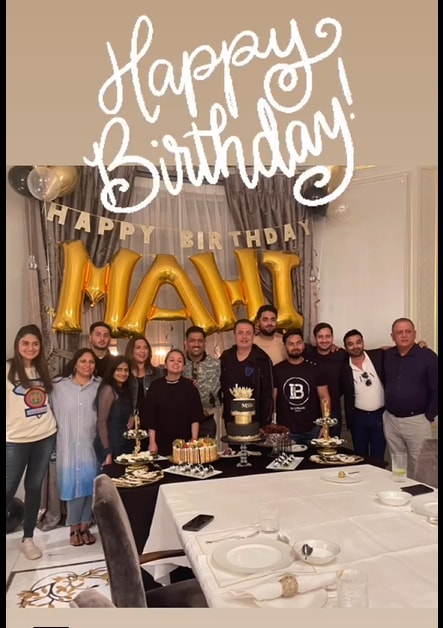 He represented India in 90 Tests, 350 ODIs and 98 T20Is. Known for making stunning decisions, Dhoni’s retirement from the game came in a similar fashion.

He last played a Test for India in December 2014 following which he revealed that would be his final red-ball game of international career.

Then on August 15, 2020, he simply posted a video of him on Instagram which served as an announcement of him calling time on his India white-ball career as well.

However, Dhoni continues to play in the Indian Premier League where he captains Chennai Super Kings. It was expected that IPL 2022 will be the last of his playing career but the four-time winner said he wants to say goodbye to fans in Chennai and hence will also be part of the next season as well.

“It’s a simple reason: it will be unfair to not play in Chennai and say thank you,” Dhoni explained the reason behind his announcement.

Get all the latest updates on Cricket News, Cricket Photos, Cricket Videos and Cricket Scores here