Chris Gayle became the first batsman in T20 history to cross the landmark of 14000 runs in the format. From his magnificent 175 in Bengaluru to his record 22 hundreds in the format - we look at 10 interesting numbers from his T20 career.

Chris Gayle produced his best performance in T20I cricket for the West Indies in more than 5 years as his hurricane 67 off just 38 deliveries took the home-team to a series win against Australia at Gros Islet on Monday. Gayle, the Universe Boss has been one of the most destructive batsmen in the history of T20 cricket and has represented several franchises all over the world. During the course of his match-winning performance against Australia he became the first player to reach the milestone of 14000 runs in T20 cricket.

We look at 10 interesting numbers from his stunning T20 career.

No batsman has scored more runs in T20 cricket history than Chris Gayle. The left-hander has amassed 14038 runs in a 16-year career in 423 innings at an average of 37.63 and strike rate of 146.18. He has represented more than 25 T20 franchises/teams all over the world and showcased his genius in the most coveted leagues such as the IPL, BBL and CPL.

Gayle hasn’t done justice to his prodigious prowess in T20 cricket for the West Indies and his match-winning performances have been few and far between. Overall he has an aggregate of 1796 runs in 64 T20I innings at an average of 30.44 and strike rate of 139.54 with two hundreds.

However, Gayle has been one of the highest impact batsmen in the most coveted T20 league in the world - the IPL and has a stupendous record for RCB. He has blasted 3420 runs in 90 innings at an average of 43.29 and strike rate of 154.4 with 5 hundreds for the franchise in T20 cricket. Chris Gayle was the Orange Cap holder in the IPL for two successive seasons in 2011 and 2012 smashing 608 and 733 runs respectively - he is the only batsman in the history of the prestigious league to achieve the feat (of top-scoring in a season) for two consecutive seasons. Gayle played for RCB in both the editions.

Chris Gayle hammered the Pune Warriors’ bowlers to all corners of the Chinnaswamy Stadium in Bengaluru in 2013 and he amassed a scintillating undefeated 175 off just 66 deliveries - a knock that included as many as 17 sixes. He raced to his century of just 30 deliveries which remains the fastest hundred in the history of T20 cricket. His unbeaten 175 is still the highest score in the history of T20 cricket! 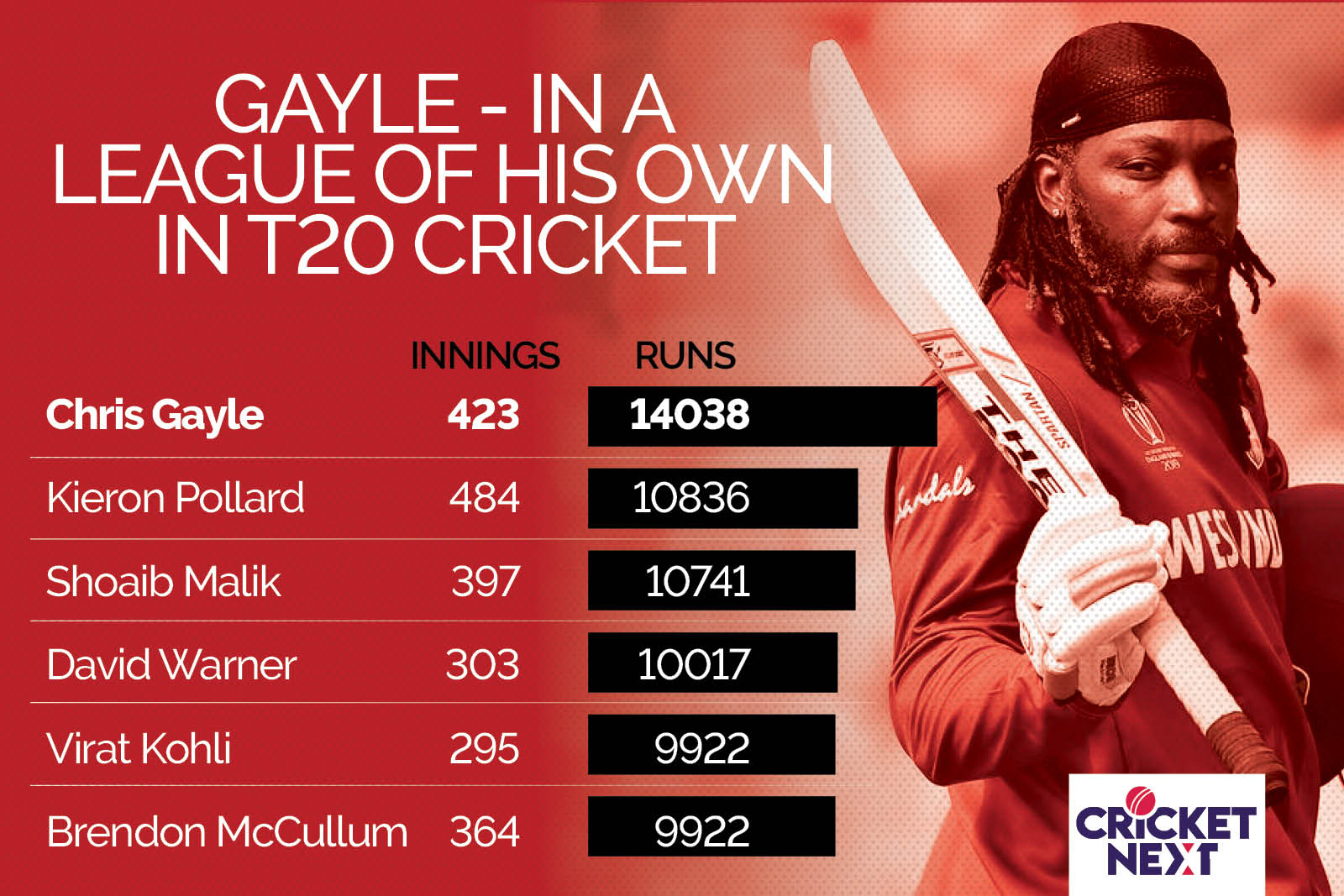 100 Not Out: Gayle’s Best Performance In T20I Cricket

Chris Gayle produced his highest impact performance for the West Indies on the biggest stage of them all - in the World T20 in India in 2016. Chasing a stiff 183 set by England in Mumbai, Gayle, opening the innings, blasted an unbeaten 100 off just 48 balls hammering 11 sixes as West Indies chased down the target with 11 deliveries to spare.

India vs Sri Lanka: ‘I Have a Good Chemistry With Rahul Dravid,’ Says Shikhar Dhawan

Chris Gayle holds the record for the maximum number of hundreds in the history of T20 cricket. No batsman comes even remotely close to the sensational 22 hundreds recorded by Gayle in the format. At number two on this count are three batsmen - Michael Klinger, David Warner and Aaron Finch - all with 8 hundreds each.

Chris Gayle holds the record for the maximum number of sixes in the history of T20 cricket. He is the only batsman in the world who has crossed 1000 sixes in the format. Kieron Pollard is at a distant number two with 730 sixes. Andre Russell with 489, Brendon McCullum - 485 and Shane Watson with 467 follow. Chris Gayle has scored 8620 runs in wins which is the highest aggregate in victorious matches for any player in T20 cricket history.