While KL Rahul is the number one choice behind the stumps for now with Sanju Samson the reserve in the limited-overs' squads to Australia, strong performances from Ishan Kishan in the IPL will mean that no one can take their place for granted. 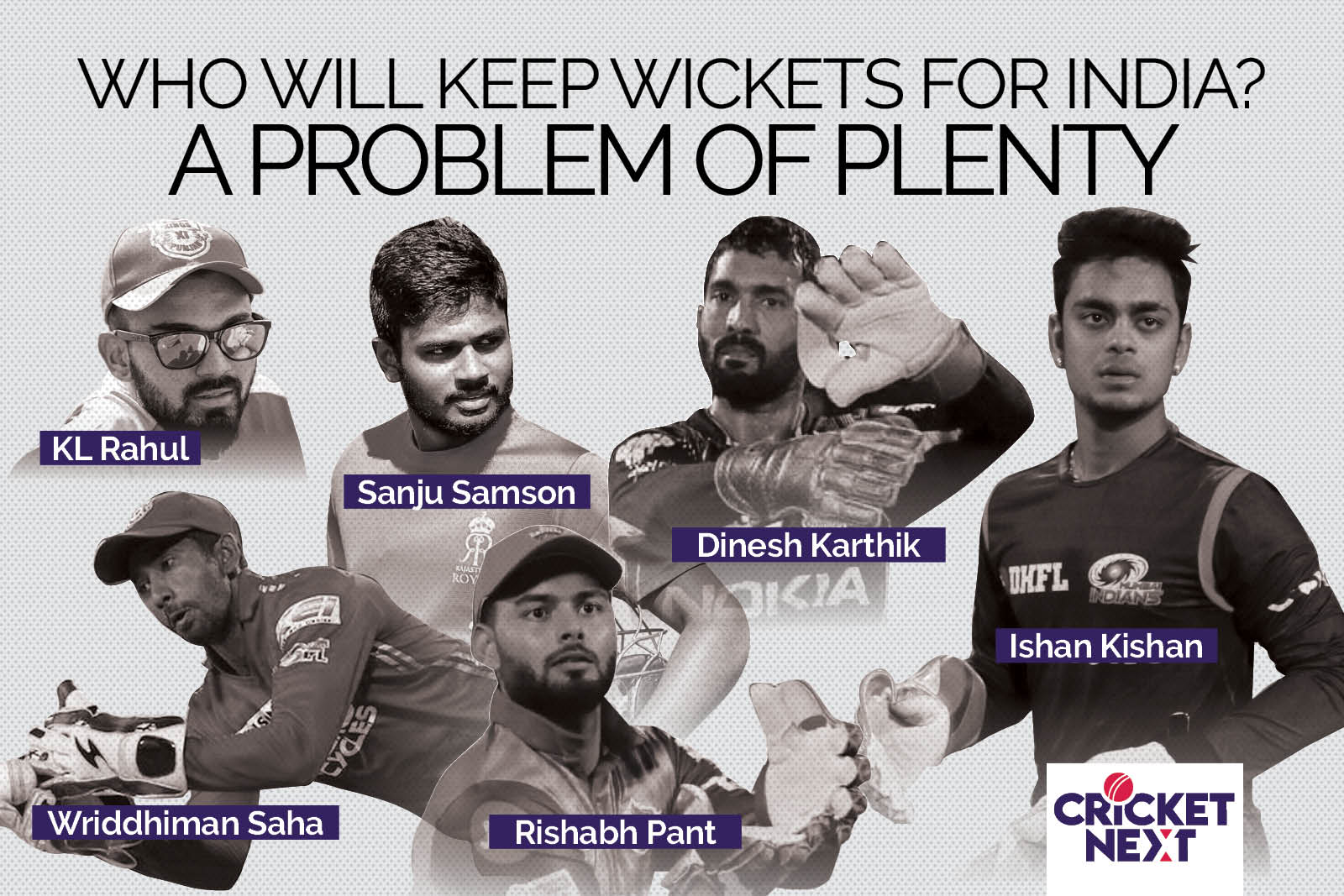 It is a problem that the Indian selectors will not mind. Such was the performance of a number of gifted Indian wicket-keeper batsmen in the Indian Premier League (IPL) 2020 that the selectors now have a problem of plenty! While KL Rahul is the number one choice behind the stumps for now with Sanju Samson the reserve in the limited-overs' squads to Australia, strong performances from Ishan Kishan in the IPL will mean that no one can take their place for granted.

We analyze the performance of the various Indian wicket-keeper batsmen in IPL 2020.

KL Rahul was the highest run-getter of IPL 2020 with 670 runs in 14 innings at an average of 55.83 including 5 fifties and one hundred. He was also the captain and designated wicket-keeper of Kings XI Punjab for most of the season. Rahul did a decent job behind the stumps for his franchise accounting for 10 dismissals (all caught) in 11 matches he was slated as the official wicket-keeper in the XI. But there is thought amongst some circles that Rahul should not be burdened with the additional role of wicket-keeping for India and should play as a specialist batsman. Thus, not surprisingly, he has only played 5 matches for India in T20 cricket as the designated wicket-keeper but from his statistics, it does not seem that his stint behind the stumps affects his batting - Rahul scored 224 runs in these 5 matches registering two fifties and scoring at an impressive rate of 144.51. 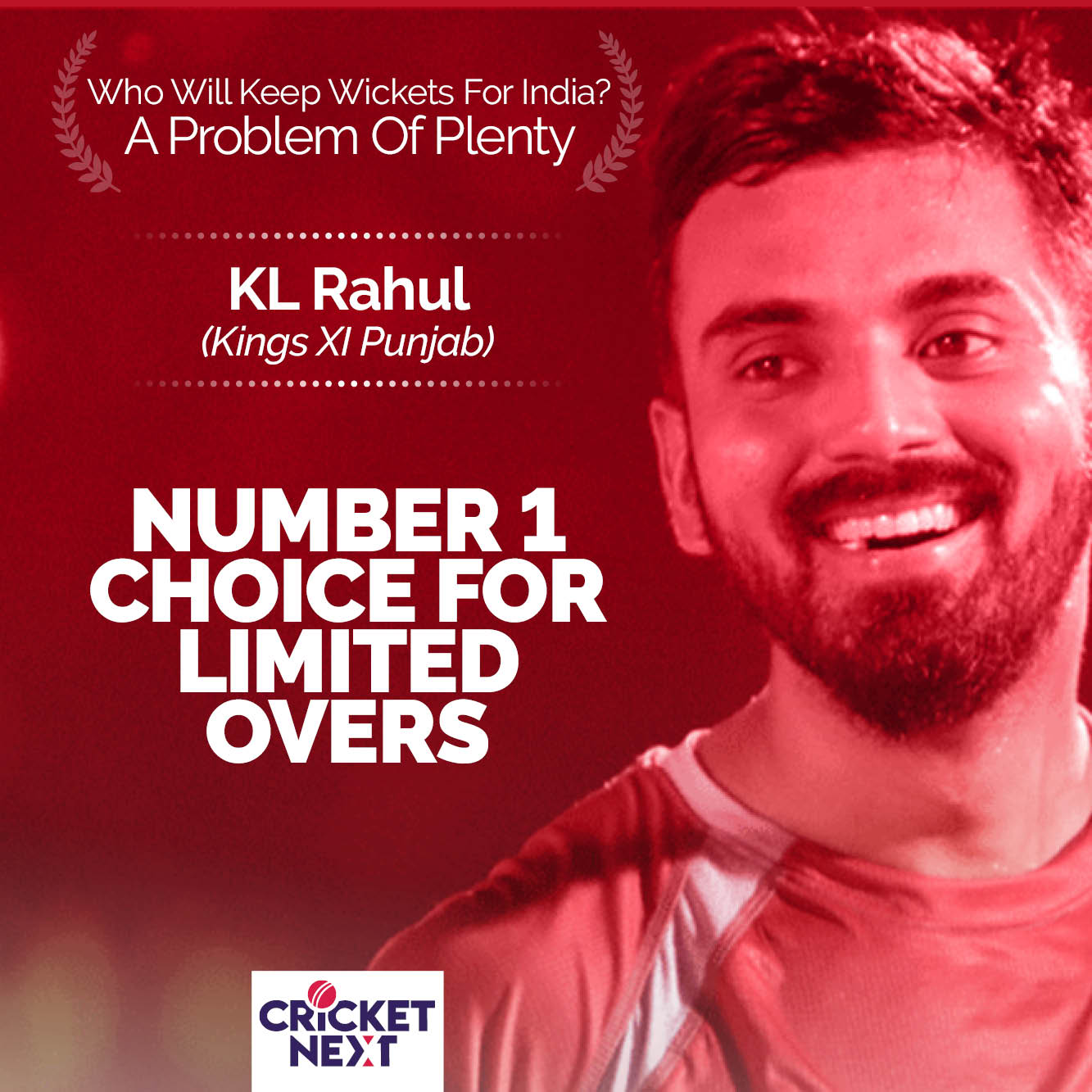 Rahul may be seen behind the stumps for India in more matches especially if they want to play an extra bowler/all-rounder against Australia. If his scores dwindle the extra burden will be taken away from him.

Sanju Samson has found a place in both the T20I and ODI squads for the tour Down Under. The Royals' wicket-keeper batsman gave two breathtaking performances in Sharjah displaying his obvious prodigious talent and ability with the bat. But as in the past, he went off the boil and recorded a number of single-digit scores for the next few matches in the tournament. While there has never been doubt on his skill and batting prowess, consistency and accountability have been a problem with Samson - more often than not he is a victim of his own over-confidence. What stood out apart from his strike rate of 158.89 - which was amongst the highest in the tournament for batsmen aggregating above 300 runs - was his agility behind the stumps. He accounted for 4 dismissals behind the stumps against CSK in Sharjah - two stumpings and two catches. Samson's brilliant diving one-handed catch to dismiss Jadhav off the bowling of Curran was one of the best catches by a wicket-keeper in the tournament. If Samson can improve on his temperament he can play as the wicket-keeper batsman for India in limited-overs should Rahul be relieved of that responsibility?

Rishabh Pant had a strike rate of 173.6 in IPL 2020 scoring almost 700 runs. He aggregated 488 at a rate of 162.66 in IPL 2019. But Rishabh Pant in 2010 was a patch of the batsman he was in the previous two editions - he lost his destructive prowess and had a poor strike rate of just 113.95 in the tournament. His loss in form meant that he did not find a place in the limited-over squads to Australia though he retained his place in the Test contingent. The problem with Rishabh Pant is that he is trying for the impossible and in the process failing to deliver even a par performance - some of the shots he attempted in the IPL 2020 were outrageous. Pant needs to calm down and play normally - that would still mean that he retains his attacking instinct but will reduce the probability of uncalculated and unnecessary risks. His wicket-keeping has improved significantly over the course of last year - Pant accounted for 13 dismissals (all catches) behind the stumps this season in the IPL. Interestingly, Pant does not have a great record with the bat in T20I cricket (contrary to his record in T20 Domestic cricket) - he has a very ordinary strike rate of 121.66 in 25 innings for India. Ishan Kishan's run-scoring at a high strike rate has been one of the biggest success stories in IPL 2020. Kishan ended as the highest run-getter for Mumbai Indians and scored 516 runs at a rate of almost 146! He scored maturity in building his innings but at the same time was daring enough to take calculated risks throughout the tournament. Kishan's best innings was his first one of the season, when, coming in at 16 for 2, he blasted 99 off just 58 deliveries against RCB in Dubai. He also scored an unbeaten 72 off just 47 deliveries against the Capitals in Dubai before recording an unbeaten 55 off just 30 deliveries against the same opposition at the same venue in Qualifier 1 - not showing any nerves of playing in a big-match of a big tournament. He was remarkably consistent with the bat with a failure rate of just 16.67% and also displayed flexibility in changing positions in the batting order - excelling as an opener and at number 4. 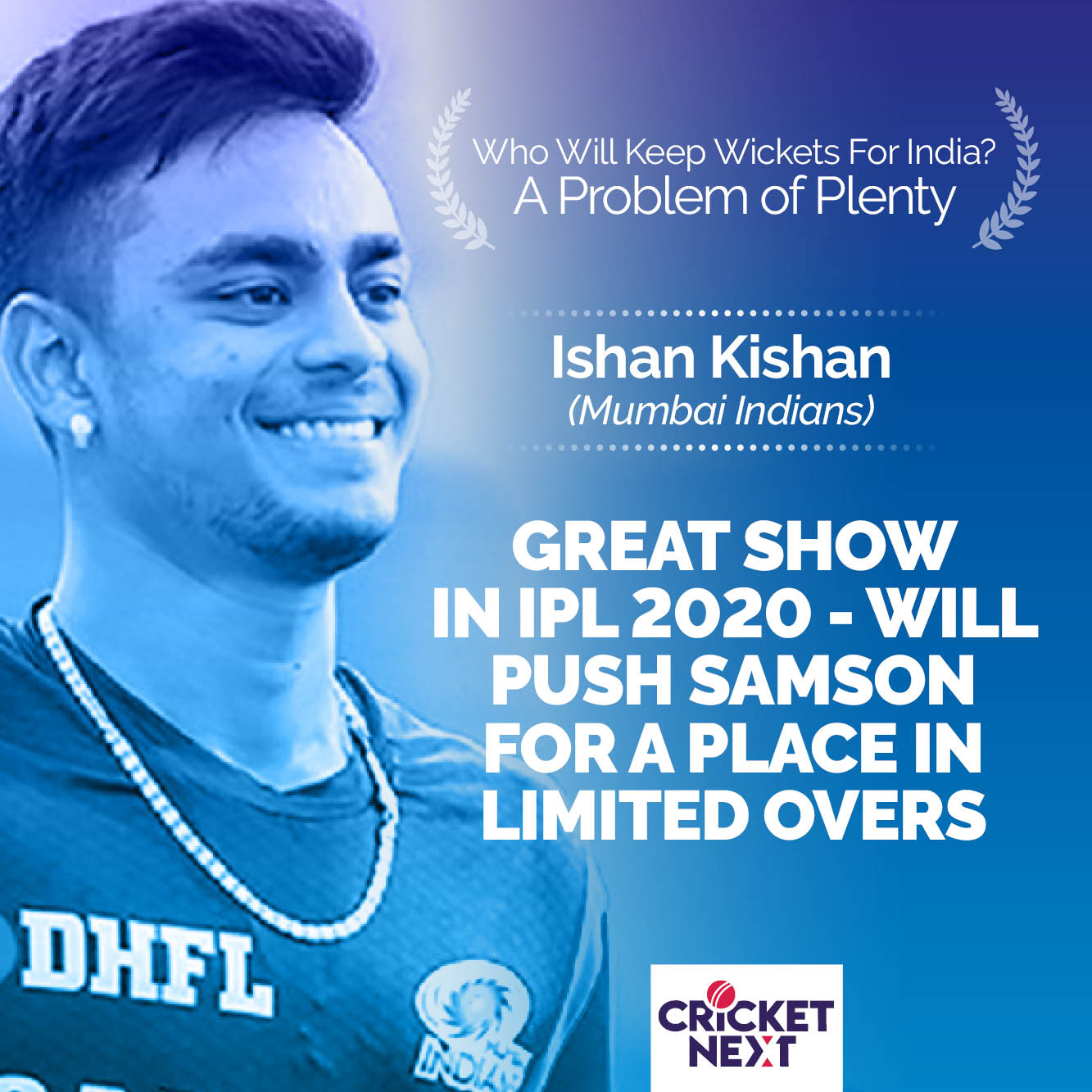 Kishan did not get a chance to keep this season as Quinton de Kock took over the duties behind the stumps in all the 16 matches for Mumbai Indians but was excellent in the outfield - he took a blinder at short third man to see the back of Warner in Sharjah. If Samson is not consistent and India decide to play Rahul as a specialist batsman, then Kishan could be next in line in the pecking order ahead of Pant.

Wriddhiman Saha's promotion as an opener was a masterstroke by SRH which saw him unleashing his attacking best in the second half of the tournament. Saha hammered 87 off 45 deliveries against DC and then again paired with Warner to put together an unbeaten 151-run opening -wicket stand as SRH chased down MI's 149 with 17 balls to spare. Saha is already a part of India's Test squad to Australia but despite his mini-burst in the IPL may not find a place in the Indian limited-over squads even in the future - he is already 36. 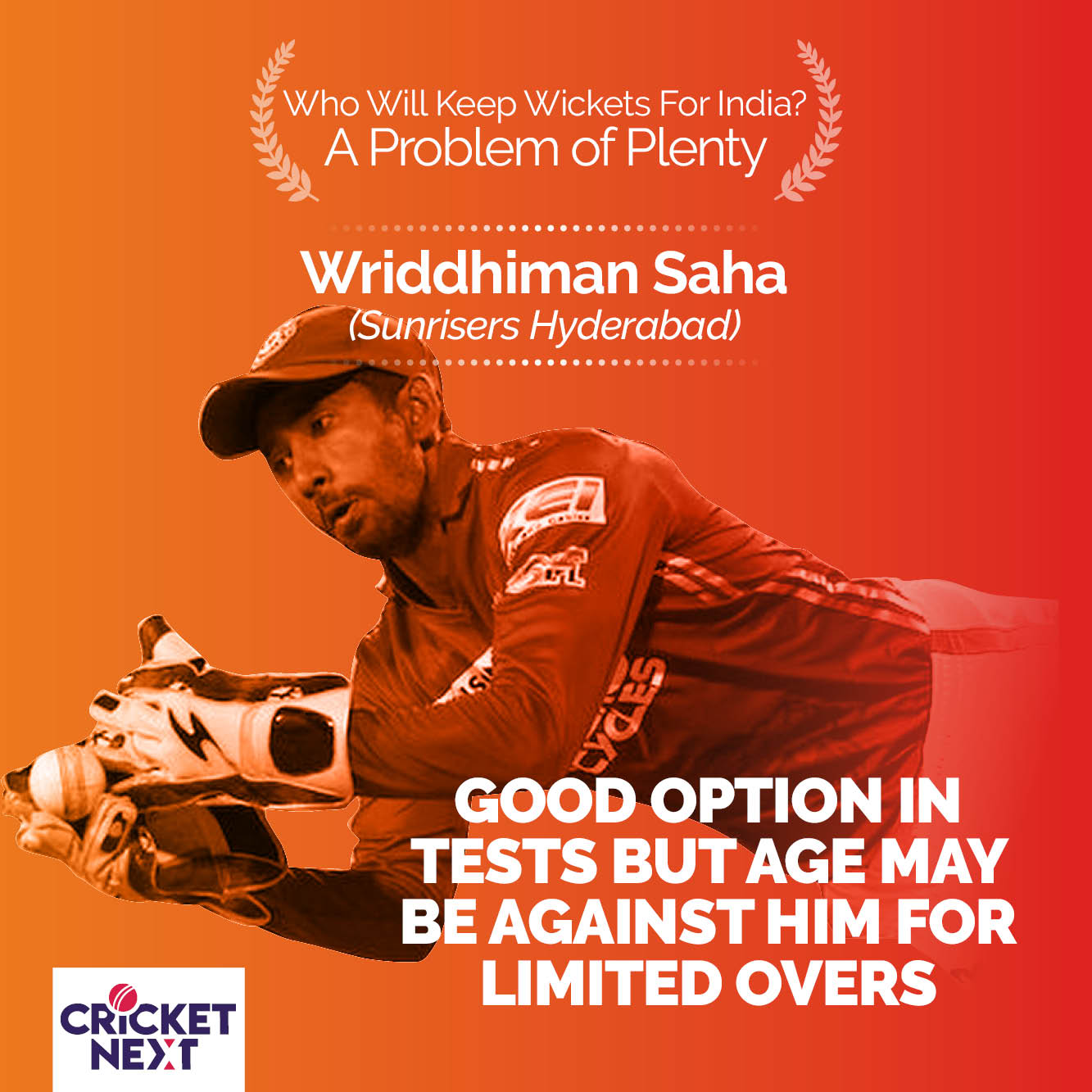 Dinesh Karthik had a poor tournament with the bat for KKR - he scored just 169 runs at an average of 14.08 and strike rate of 126.11 in 14 matches in IPL 2020. Although he was excellent behind the stumps and took 9 catches as the designated wicket-keeper, including sensational diving to his left one handed stunner to get rid of Ben Stokes against the Royals in Dubai, Karthik may find it tough to make a return to the India colors again. His form with the bat coupled with the fact that he is not getting any younger - Karthik is 35 - does suggest that we may have seen the last of him in international cricket.