There were 4 Indians - Rohit Sharma, Rishabh Pant, R Ashwin and Ravindra Jadeja who featured in the best XI of the inaugural WTC. The middle order comprised the likes of Kane Williamson and Steven Smith while the greatest all-rounder in the world - Ben Stokes was slotted in at number 5.

The inaugural edition of the World Test Championship (WTC) has seen some brilliant performances and thrilling encounters. The two best teams - India and New Zealand will clash in the mega final in Southampton from the 18th of June. We analyse the matches and the performances in the last two years and pick the Best World XI from the first edition of the WTC. Emphasis will be given to context of the match, contribution in wins and difficulty level of opposition. We select the batting line-up giving more weightage to position.

This was the easiest selection in the WTC Best XI as both the openers select themselves on the sheer weight of match-winning performances for their countries.

Rohit Sharma had the third-highest average of 64.37 in the WTC (behind Labuschagne and Azam) but had a higher impact than the Australian and the Pakistani in dictating the course of play. He scored big runs for India at the top of the order at a very high strike rate - not only putting the opposition bowlers on the backfoot but also creating time for Ashwin and Jadeja to run through opposition sides at home - this is something he did consistently in his very first series as opener - against South Africa at home in 2019 scoring twin hundreds at Visakhapatnam before recording a double at Ranchi. Rohit displayed another quality - of scoring tough runs for India under pressure when others had failed around him. Two performances stood out. His magnificent counter-attacking 161 off just 231 deliveries almost single-handedly changed the course of the match and the series for India against England in early 2021. From 0-1 down, India went on to win the series 3-1. He had produced another gem in the series - 66 off 96 balls on a treacherous Motera wicket again when almost every other specialist batsman had found it difficult to lay bat to ball.

David Warner had an aggregate of 948 runs in 22 innings at an average of 47.4 and strike rate of 62.4 for Australia at the top of the order. Like Rohit, what stood out was his contribution in his country’s success in the Championship. 84% of the total runs scored by Warner in the WTC came in wins for Australia and his team were victorious in all the three matches in which he recorded a hundred. His most outstanding performance - a stunning unbeaten 335 off 418 deliveries - came against Pakistan in the Day and Night Test at the Adelaide Oval in 2019 resulting in a 2-0 series sweep for the home team.

There were two contenders for the number 3 position - New Zealand skipper Kane Williamson and Australia’s run-machine Marnus Labuschagne. Despite scoring 600 odd runs less than his Trans-Tasmanian rival, it is Williamson who is selected for the crucial slot given the timing of his big performances and contribution in New Zealand’s dominance in this period.

Williamson aggregated 817 runs in 9 Tests (14 innings) at an average of 58.35 with three hundreds during this period. His average in victorious matches (of 94.5) is higher than the corresponding average of Labuschagne (85.58). After a slow start to the Championship, he top-scored with 89 on a difficult Basin Reserve wicket against India which helped New Zealand take early ascendancy and dominate the much-fancied Indian team at home in early 2020.

Williamson then hit a purple match and registered two double hundreds and a hundred in his last four Test innings all resulting in a win for his country.

Smith Better Than Root At Number 4

It was again a two-way fight between two current greats for the number 4 position. Steven Smith was the leading run-getter and also had a higher average than Joe Root in this period. He scored 1341 runs in 13 Tests at an average of 63.85 with 4 hundreds in comparison to the England captain who piled on 1232 runs in 14 matches at an average of 56 with three hundreds in this time-frame.

Smith was in devastating form in the 2019 Ashes in England recording twin hundreds in the series opener in Birmingham resulting in a massive 251-run victory. His 144 off 219 deliveries out of an Australian total of 284 in the first innings was a special effort as he single-handedly dominated the England attack even as every other batsman failed.

Smith again came out to bat after the early loss of a couple of wickets and changed the course of the Old Trafford Test hammering 211 which gave Australia a thumping win and an unassailable 2-1 lead going into the fifth and final Test.

Root was in fine form in the subcontinent registering two hundreds in Sri Lanka on spinner-friendly wickets but given the latter’s ranking in Test cricket these performances have a lesser impact than Smith’s in the Ashes. Root also led England to a win in the series opener in Chennai registering a fine double hundred but could not carry his form through the series. 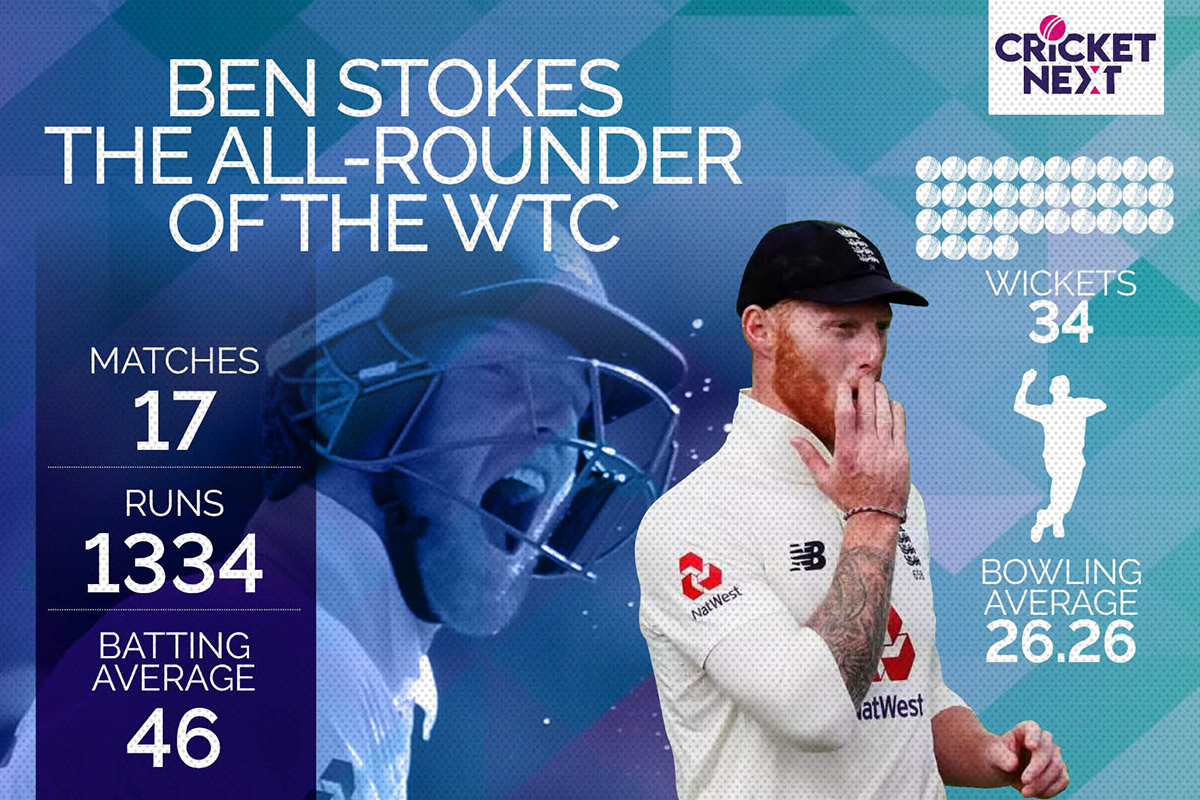 No debate here. The greatest contemporary all-rounder in international cricket occupies the number 5 slot. Ben Stokes has an aggregate of 1334 runs at an average of 46 and has also chipped in with 34 wickets at a bowling average of 26.26 from 17 matches in the competition. Stokes’ stand-out performance came in the biggest series of them all - The Ashes in the summer of 2019. He scored big runs from difficult positions when England had lost early wickets showing character to stay at the wicket but also the talent and ability to counter-attack when needed.

Stokes produced what is being widely described as the greatest Test knock of all-time. England were bowled out for 67 in the first innings and had a daunting chase of 359. Batting at number 5, Stokes blasted an undefeated 135 off 219 balls including 11 fours and 8 sixes taking the home team to a stunning one-wicket win. Stokes was also the Player of the Series in England’s comprehensive 3-1 win in South Africa in 2019-20.

Rishabh Pant - the batsman had a massive impact on two monumental series for India recording awe-inspiring match-defining performances from high pressure situations in both of them. He did in Australia 2020-2021 and at home against England in 2021 what Gilchrist did consistently for Australia in the early 2000s - produce match-changing counter-attacking knocks from the lower middle-order which changed the course of play and outcome of a match and series.

Pant hammered 97 off 118 deliveries against Australia in Sydney in 2021. Chasing 407, he gave the home team a real scare and not only helped India save the match and remain alive in the series but actually threatened to win the match for his country as long as he was out there in the middle. He then produced one of the finest knocks in the fourth innings in Test history remaining undefeated on 89 off 138 deliveries as India chased down the target of 328 with three wickets in hand at the Australian fortress at The Gabba. Pant then counter-attacked and smashed a brilliant 101 off 118 balls against England taking India from 80 for 4 to above 350 in the fourth and final Test at Motera in Ahmedabad.

Ravindra Jadeja selects himself as the other specialist all-rounder and had the highest batting average of 58.62 amongst all-rounders in the inaugural WTC. His batting and bowling differential of 29.94 was the highest amongst all-rounders with at least 10 matches in the competition. Jadeja consistently scored tough runs from difficult situations for India from the lower middle-order while also chipping in with a bagful of wickets.

Hardik Pandya Makes Big Revelation, Says Will be Bowling in All Matches of T20 World Cup

R Ashwin was leaps and bounds and miles and kilometres ahead of any other spinner in the WTC. He returned with 67 wickets in 13 matches at an average of 20.88 and strike rate of 46.9. Ashwin annihilated opposition line-ups at home in India picking 15 wickets against South Africa and a staggering 32 in 4 Tests against England. He also improved and emerged as wicket-taker in SENA in this time-frame and came up with a fine performance in the crucial Test at the MCG. Pat Cummins is the leading wicket-taker in the inaugural edition of the WTC with 70 wickets in 14 matches at an average of 21.02 and strike rate of 47.6. His strength has been his sensational consistency - Cummins has gone wicket-less in just two of the 28 innings he bowled in the Championship. Three of his best performances - where he picked 7 wickets each - came in two big series in three victories for Australia - against India in Adelaide and in the Ashes.

Tim Southee is New Zealand’s highest wicket-taker with 51 wickets in just 10 matches at an average of 20.66 and strike rate of 45.9 in the WTC. His strike rate places him at number four amongst all bowlers with a minimum of 30 wickets and 8 matches. Southee bagged six wickets in the match in New Zealand’s thumping series-levelling innings’ win against Sri Lanka in Colombo in 2019 and returned with a 9 wicket haul against India in Wellington.

Mitchell Starc finds a place for himself in the XI as the only left-arm pacer in the side. Starc returned with 44 wickets in just 10 matches at a strike rate of 46.4 in the WTC. He routed Pakistan in Adelaide with 6-66 in the first innings, five of which were top-middle order wickets. He ran through the New Zealand line-up in Perth skittling them for 166 and 171 returning with 9 wickets in the match.