R Ashwin could overtake the legendary Wasim Akram while Ravindra Jadeja will have the distinction of making it to the Famous Five who have achieved the double of 200 wickets and 2000 runs in Test cricket.

India will clash with New Zealand in the final of the World Test Championship starting in Southampton from tomorrow – Friday, the 18th of June. With a plethora of superstars on both sides, a number of records can be set and broken in the southern port of England over the course of the next five days. We look at some of the interesting upcoming milestones and other numbers from the mega final.

46: Ravindra Jadeja is just 46 runs away from achieving a unique double
Ravindra Jadeja has picked 220 wickets and scored 1954 runs in his Test career. Another 46 runs in Southampton and he will become only the fifth Indian player after Kapil Dev, Anil Kumble, Harbhajan Singh and R Ashwin of having the unique double of a minimum of 200 wickets and 2000 runs in Test cricket. Overall, 20 players have achieved the feat.

If Jadeja manages to achieve the feat in Southampton (in his 52nd Test), he would become the fifth-fastest in doing so on the all-time list after Ian Botham (42 Tests), Imran Khan (50), Kapil Dev (50) and Ashwin (51 Tests). Richard Hadlee got there in 54 Tests, Shaun Pollock in 56 and Chris Cairns in 58 matches. 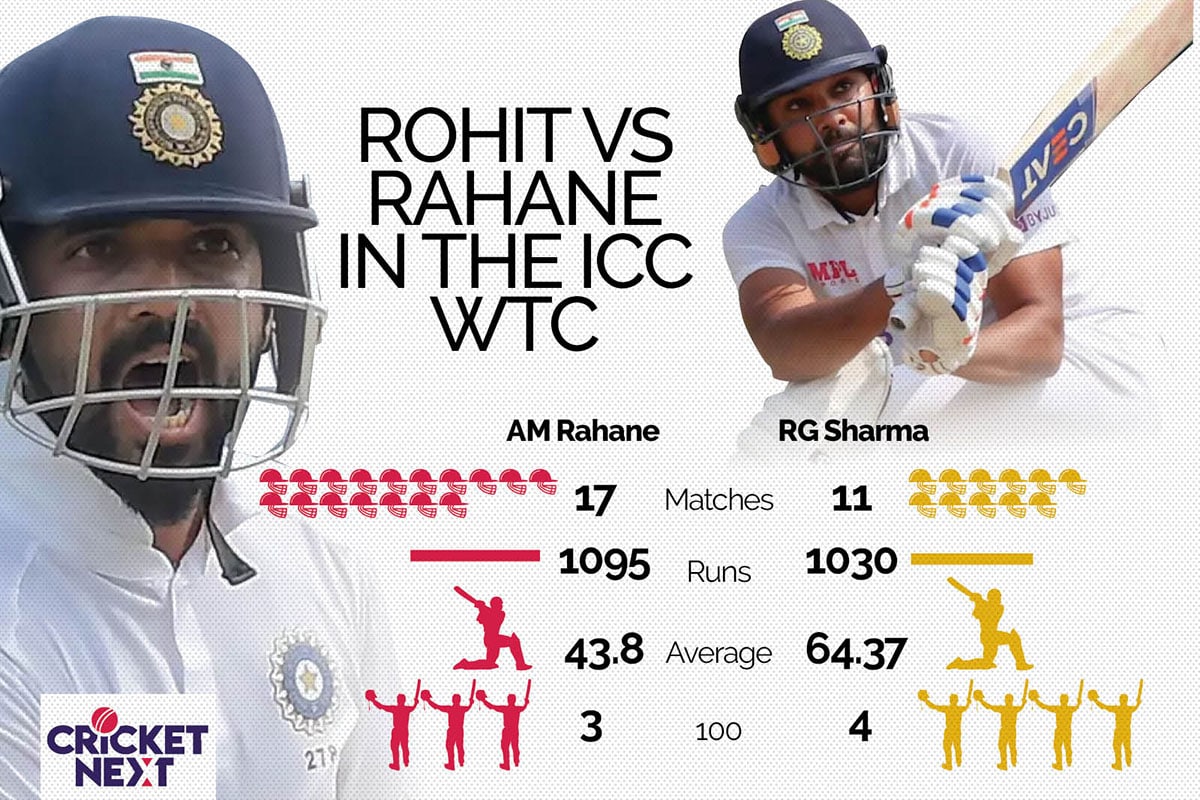 1095 vs 1030: The competition between Rahane and Rohit in the WTC
There is a direct competition between Ajinkya Rahane and Rohit Sharma for the highest run-getter for India in the WTC. Rahane has an aggregate of 1095 runs in 17 matches at an average of 43.8 with 3 hundreds whereas Rohit has scored 1030 runs in 11 matches at a much higher average of 64.37 with 4 hundreds in the tournament.

Watling had a knack of scoring big runs under pressure when others failed around him. He blasted 205 from 127 for 4 against England at Mount Maunganui in the series opener in 2019 taking his team to an innings win. He also rescued New Zealand from 94 for 5 in the second innings and registered 124 negotiating the likes of Zaheer Khan, Shami and Ishant Sharma for 367 deliveries at the Basin Reserve in 2014.

Ashwin is also four wickets short of becoming the highest wicket-taker in the WTC. He has bagged 67 wickets in 13 matches at an average of 20.88 in the tournament. Pat Cummins tops the list with 70 wickets and is followed by Stuart Broad of England with 69 wickets. Trent Boult will be one of the key threats for India in the final of the WTC in Southampton. With his ability to swing the ball he can run through the Indian batting line-up and wreak havoc on the opposition. Boult has picked 287 wickets in 72 matches at an average of 27.85 and strike rate of 55.9 and is just 13 shy of becoming the fourth New Zealand bowler after Hadlee, Vettori and Southee to make it to the 300-Club.