While both Virat Kohli and Kane Williamson have dominated at home, the Indian skipper has a better overseas record than his New Zealand counterpart. In terms of their batting, Kohli has scored runs in more challenging away conditions during his career and has a superior record in England but Williamson has been in the form of his life since 2020.

India vs New Zealand, World Test Championship (WTC): India and New Zealand will clash in the final of the WTC in Southampton from the 18th of June. With both the sides boasting of a world-class fast bowling unit, the winner ultimately could be from the team which performs better with the bat and thus the contest between the two captains – Virat Kohli and Kane Williamson – as leaders and as the playmakers of their line-ups – would be most significant.

We look back at the captaincy records of the two modern greats and how they have fared as batsmen in the inaugural WTC and overall.

Virat Kohli has led India to victory in as many as 36 of the 60 Tests he has captained. His win-loss ratio of 2.571 is the highest in India’s Test cricket history and way ahead of the next best, Sourav Ganguly (1.615). Kane Williamson has an even better record as leader of the New Zealand Test team with 21 wins and 7 losses from 36 matches which results in a win-loss ratio of 2.625.

However, Kohli’s Win Percentage of 60% is marginally higher than the corresponding percentage of Williamson’s of 58.33%. 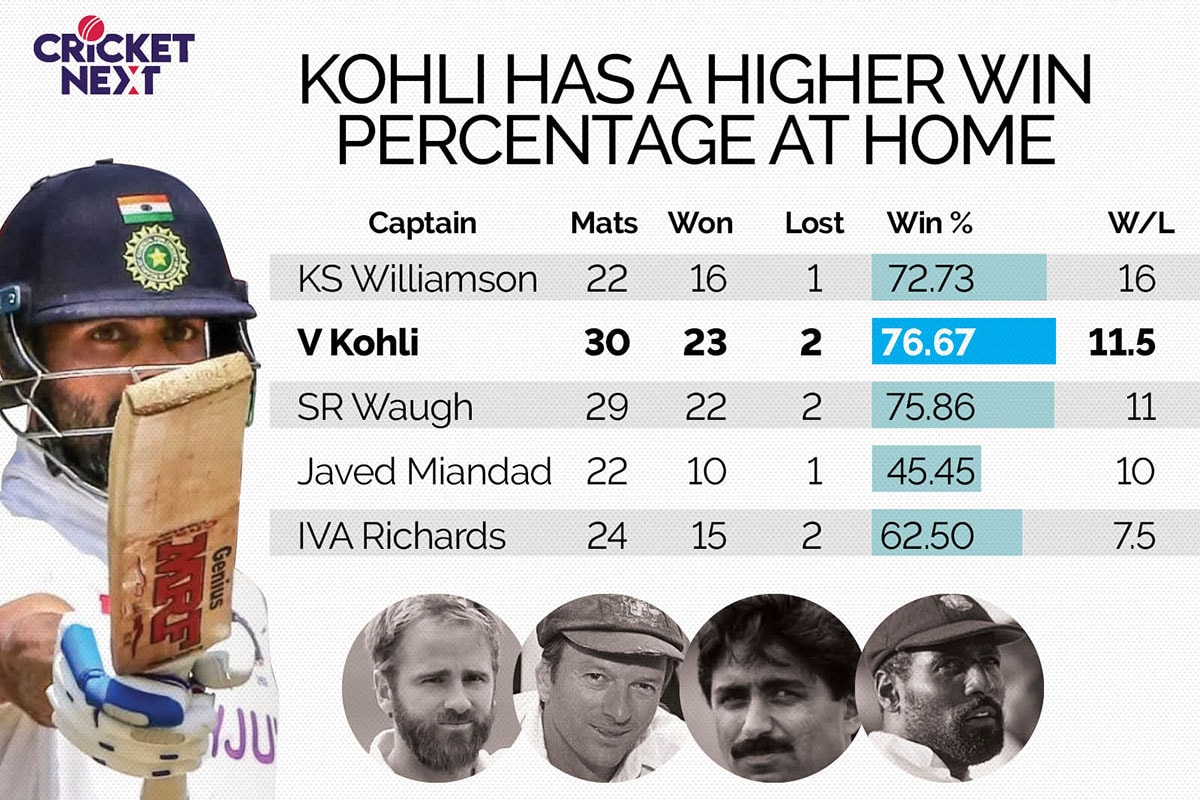 The success of both India and New Zealand and the main reason for them finishing as the top two in the WTC has been their dominance at home in the last few years. Williamson has led his side to 16 wins in 22 matches at home since 2016 with just a solitary loss to South Africa at Wellington in 2017. India has enjoyed a similar run under Kohli winning 23 of the 30 matches at home and losing just two – against Australia in Pune in 2017 and England in Chennai in 2021.

While Williamson’s win-loss ratio at home of 16 is the best ever in Test history (min.20 matches as captain), he is followed by Kohli whose win-loss ratio stands at 11.5.

However, it is the Indian captain under whose leadership India’s Win Percentage of 76.67% is the highest in Test cricket history – ahead of Williamson and legends like Steve Waugh, Javed Miandad and Viv Richards. This basically implies that India’s domination at home under Kohli between 2015 and 2021 has been more ruthless than the West Indies domination in the Caribbean under the leadership of Lloyd and Richards or Australia’s domination Down Under under Ponting or Steve Waugh and that is a mind-boggling achievement!

Also, in terms of series, India has won all their 10 series under Kohli which is a sensational record. However, there is a blemish in Williamson’s home record – South Africa got the better of them in New Zealand in 2017.

Kohli A Bigger Series-Winner For India

Kohli took over the Test captaincy from Dhoni in exceptional and difficult circumstances in the middle of the Australian series Down Under in 2014. Since then he has led India to victory in a stunning 16 of the 20 series he has been in-charge. These are mind-boggling returns for any captain anywhere in any era of Test cricket history. This period includes an unbeaten run of 10 series (including 9 wins in a row) starting from a 2-1 win in Sri Lanka in August 2015 to a 1-0 win against the same opponents at home in November 2017.
India has lost only three full series under Kohli – in South Africa and England in 2018 and in New Zealand in 2020.

New Zealand has won 13 of the 18 Test series under the leadership of Williamson. There have been four losses – away in South Africa and India in 2016, against South Africa at home in 2017 and in Australia in 2019. Kohli The Captain Has A Better Overseas Record Than Williamson

India has won 13, lost 12 and drawn 5 overseas matches under the leadership of Kohli who has the highest overseas win percentage of 43.33% amongst all Indian captains. Of course, India’s biggest overseas triumph under Kohli was their first historic series win Down Under in 2018-19.

On the other hand, New Zealand have lost 6 and won only three of the 11 away matches with Williamson at the helm. Contrary to the great performance of the Indian team in Australia in 2018-19 and 2020-2021, New Zealand were thrashed 0-3 ruthlessly by the Australians Down Under in 2019.

The feather in Williamson’s cap though has been the recent 1-0 series win albeit against a depleted England unit.

Both Kohli and Williamson are modern greats and amongst the finest Test batsmen of all-time. While the Indian skipper has a Test average of 52.37 with 27 hundreds in 91 matches, the New Zealand captain has played 84 Tests and returned with an average of 53.6 with 24 hundreds.

However, their performance in SENA suggests that Kohli has scored the tough runs against the more difficult oppositions whereas Williamson does not have such a great record in these countries (barring New Zealand). Kohli has an aggregate of 2889 runs in 32 matches in SENA at an average of 46.59 with 11 hundreds. Williamson, on the other hand has an average of just 34.8 with 4 hundreds in SEA plus India – the four most challenging away nations for him.

Although he failed in England in 2014, Kohli more than adequately made up for it by blasting 593 runs in the five-match series in 2018 which included two centuries. Williamson has scored 261 runs in 5 Tests in England at an average of 26.1 registering one hundred and a fifty. He has failed in 8 of the 10 innings in the country which is a much higher Failure Rate than Kohli’s in England (12 innings out of 20).

His performance against England at Birmingham notwithstanding, Williamson has been in the form of his life for New Zealand. He had scored a massive 736 runs in 7 innings at an average of 105.14 with three hundreds since 2020 before the start of the England series. Kohli, on the other hand has been struggling of late especially in Test cricket and has mustered just 288 runs in 7 Tests (12 innings) at an average of 24 with no hundreds and only three fifties in the same time-frame.

Kohli and Williamson, due to the nature of their personalities have different styles of captaincy. While the Indian skipper is very passionate, animated and vocal, the New Zealander is cool and calm quietly but effectively marshalling his troops and resources.

Who will lift the prestigious trophy in Southampton?

The outcome will directly depend on who wins the captaincy and batting battle between Kohli and Williamson.