World Test Championship: With Patience As Their Virtue Two NZ Left-Handers Who Can Cause Great Damage To India

WTC Final 2021: While all eyes will be on Kane Williamson, India must watch out for the two left-handers - Tom Latham and Henry Nicholls - when they clash with New Zealand in the final of the World Test Championship starting in Southampton from the 18th of June.

India will clash with New Zealand in the final of the World Test Championship in Southampton from the 18th of June. While Kane Williamson will be India’s biggest threat in the opposition line-up there are two other batsmen who have the potential to defy the Indian bowlers and post big totals. Tom Latham and Henry Nicholls have been in outstanding form for New Zealand in the WTC and will pose a big challenge for Virat Kohli and his men from Friday.

Latham has scored tough runs against the new ball under pressure when early wickets have fallen around him and this ability to defy the opposition bowlers and put a price tag on his wicket separates him from the other openers in the last couple of years. He produced a brilliant 154 off just 251 deliveries against Sri Lanka in the second and final Test in Colombo in 2019 in conditions which were alien to those experienced back at home in New Zealand. Even as the big and mighty fell around him, Latham stood firm and dominated the Sri Lankan spinners in their own backyard. New Zealand posted a massive total and went on to win by an innings thereby levelling the series 1-1.

He has been very consistent at home since the India series contributing at the top of the order regularly for New Zealand. Latham was the home team’s star with the bat in the big series win against India in Christchurch where he recorded twin fifties. An old-fashioned opener, the left-hander thrives in challenging conditions and situations and is a grafter. 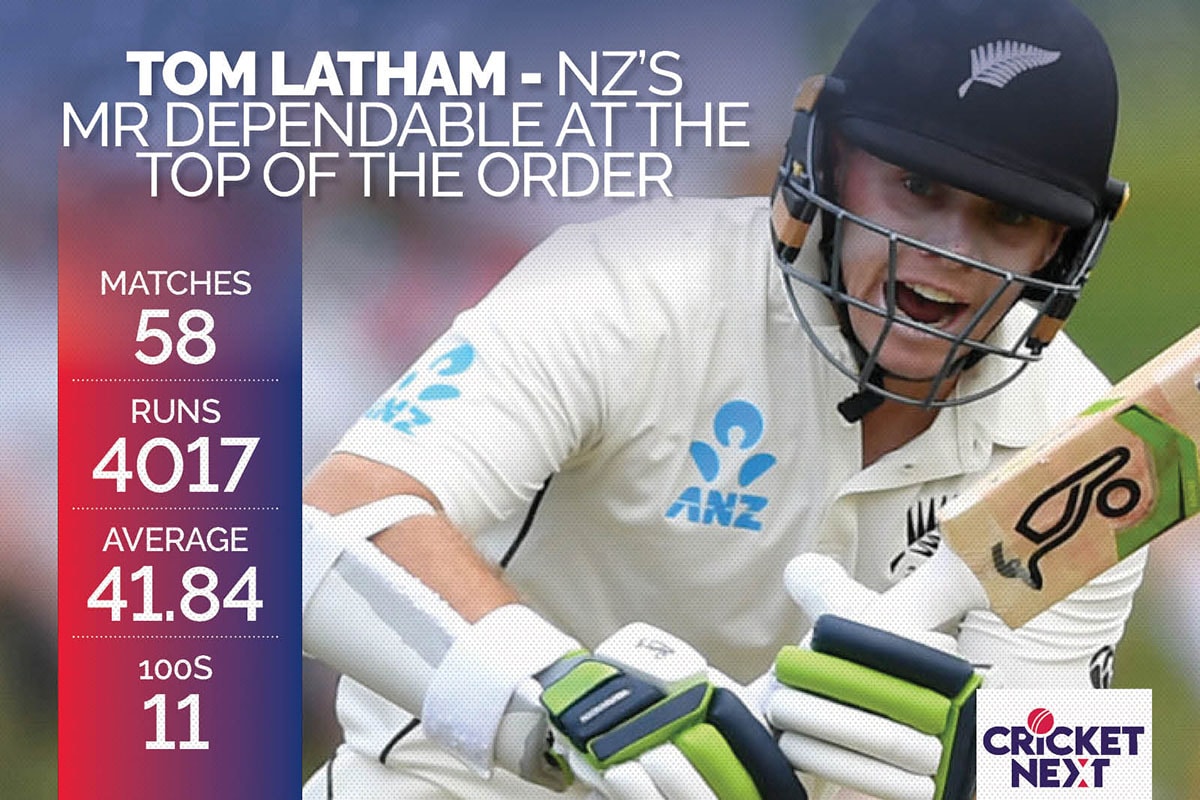 He consumed as many as 122 deliveries in the first innings in Christchurch top-scoring for New Zealand and then again defied the world-class Indian attack comprising Bumrah, Shami and Yadav in the second innings in a tricky chase of 132. Patience is his greatest virtue and he stands out for his temperament and ability to leave the ball outside the off stump tiring the bowlers making them bowl straighter to his strength.

Latham has, on an average, faced 81 deliveries per innings in the WTC which roughly translates to 13.3 overs. This essentially means that he has played the entire first session of the innings every time he has gone out to bat. This is no mean achievement as this indicates that Latham has negotiated the tough period against the new ball and got a bit of shine off it making it easier for the likes of Williamson and Taylor to follow.

He produced a match-defining knock in England in the second Test at Leeds in 2015 with a defiant 84 even as the other batsmen succumbed to the likes of Broad and Anderson. New Zealand went on to win the match and level the series. It is this character and resolve that will make Latham a prized wicket for India in Southampton.

WTC 2021: What Should be India’s Playing XI for WTC Final Against New Zealand?

Henry Nicholls is a very similar type of batsman to Latham – a left-hander who is an accumulator and grinder rather than a flamboyant stroke maker but nonetheless is mighty effective. Nicholls has scored 2257 runs in 39 Tests at an average of 43.4 with 7 hundreds.

His career took a transformation when, batting at number 5, he registered a fluent 118 off just 161 deliveries against South Africa at the Basin Reserve in 2017. Although New Zealand lost, they had found a new star in the middle order. Since then, Nicholls has aggregated 1775 runs in 27 Tests at an average of 49.3 with all his 7 tons coming in this time-frame. Two of his highest impact knocks include a brilliant 145 against England in Auckland in 2018 and a fighting undefeated 126 from 60 for 4 in the second innings against Pakistan in Abu Dhabi. His partnership with Williamson has been one of the big positives for New Zealand in the last few years and led them to a famous 2-1 win in this series in the UAE.

Nicholls is one of the few modern-day batsmen who has a higher record in the second innings as compared to the first (50.33 vs 40.59). He has been one of the most prolific run-scorers from the number 5 position since 2018 scoring 1416 runs in 32 innings at an average of 48.82 during this period. No other number 5 batsman has registered more hundreds than Nicholls’ 5 in this time-frame.

Nicholls has been the third-highest run-getter for New Zealand in the WTC with 585 runs in 10 matches at an average of 41.78. His record at home – 441 runs in 6 Tests at an average of 63 with two hundreds – in this time-frame is one of the major reasons for New Zealand’s domination in the last three to four years in Test cricket. He scored a useful and patient 61 off 175 deliveries in the series opener against England at Lord’s even as every other batsman (with the exception of Conway) failed around him.

The two left-handers are in many ways classic Test batsmen who like to grind and tire out the opposition bowlers. Patience, temperament and mental toughness are their virtues and they both attach a price to their wicket.

Latham and Nicholls may not look attractive but are damn effective and have played a significant part in New Zealand’s great run in Test cricket since 2017 and barring Williamson will be the two biggest obstacles for India in their quest for the WTC trophy.