Back to News18
Home » Cricket Home » Photogallery » In Pics, From MS Dhoni to Mohammad Amir - Cricketers Who Announced Their Retirement This Year

In Pics, From MS Dhoni to Mohammad Amir - Cricketers Who Announced Their Retirement This Year 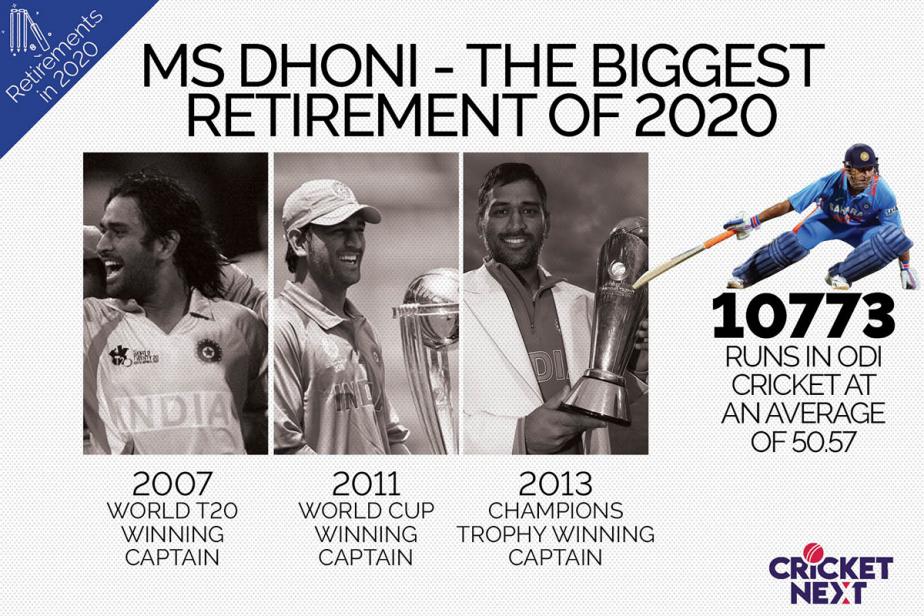 A small-town boy whose first love was football went on to become one of the greatest players in the history of cricket. MS Dhoni had been a great of the game – one of the most astute and successful captains of all-time taking India to the pinnacle in 2007 and 2011, an all-time legendary ODI batsman and amongst the best with the gloves behind the stumps. Dhoni scored 10773 runs in ODI cricket which remain the 11th highest in the history of the format. He is one of the two batsmen (the other being Virat Kohli) who achieved the double of scoring 10000-plus runs at an average of above 50. Dhoni had an average of 69 in victorious matches - the third-highest in ODI history after Babar Azam and Kohli and an average of 102.71 in successful chases - the highest in ODI history! Dhoni was also a very effective Test batsman with an aggregate of 4876 runs in 90 Tests at an average of 38.09 including 6 hundreds. Dhoni, the captain led India to victory in the treble – the 2007 WT20 in South Africa, the 2011 World Cup in India and the 2013 Champions Trophy in England. He also took India to the number 1 ICC Ranking in Test cricket in 2009.

Vernon Philander was one of the outstanding fast bowlers of his generation with a great record in Test cricket. He played 64 Tests for South Africa picking 224 wickets including 13 five-wickets in an innings and two ten-wickets in a match. His bowling average of 22.32 is the second-best in South Africa's Test cricket history (min.150 wickets) only after Allan Donald, better than legends like Steyn, Pollock and Ntini.

A batting all-rounder, who many believe never realised his true potential in a career marred with controversies, is best remembered for top-scoring for the West Indies in the two World T20 Finals in 2012 and 2016. Samuels scored 78 off 56 deliveries in a low-scoring final against Sri Lanka in Colombo before coming up with another stand out match-winning knock in Kolkata in 2016 against England, where he hammered an unbeaten 85 off just 66 deliveries helping West Indies chase down the target of 156.
Samuels scored over 5000 ODI runs with 10 hundreds and close to 4000 Test runs including 7 centuries.

Talented and controversial Pakistani speedster, Mohammad Amir made a shocking exit from international cricket in December this year. Amir picked 119 wickets in 36 Tests at an average of just over 30 for Pakistan. His most memorable performance came against England at The Oval in 2010 when in the second innings he returned with 5-52 to bowl out the home team for 222. Pakistan went on to win the Test by 4 wickets. Amir also picked 81 ODI wickets in 61 matches and 59 T20I wickets in 50 matches for Pakistan. He was part of the Pakistan squad which won the 2009 World T20 and the Champions Trophy title in 2017.

New Zealand all-rounder, Corey Anderson announced his international retirement in December after representing the country in 93 matches across the three formats. Anderson is best remembered for the world record he set on New Year's Day in 2014, when he smashed a 36-ball hundred in an ODI against the West Indies in Queenstown - it was the fastest century in ODIs back then.

On the same day (15th August) as his long standing captain for India and Chennai Super Kings announced his retirement from international cricket, Suresh Raina also called it quits on a fine career for India. Raina did not realise his true potential in Test cricket where he scored 768 runs in 18 Tests but was a fine batsman for India in limited overs cricket. Raina aggregated 5615 runs in 194 ODI innings at a strike rate of 93.5 including 5 hundreds and 36 fifties. His finest performance, albeit in a losing cause, came against Sri Lanka in the final of the tri-nation tournament in Bangladesh in 2010. Coming out to bat at 47 for 4, he scored 106 off 115 deliveries taking India to a respectable 245. He also scored a splendid 74 off just 56 deliveries in the 2015 World Cup against Pakistan in Adelaide. Raina was also a fine T20I batsman and scored 1605 runs at an average of 29.18 and strike rate of almost 135. He scored a smashing 101 off just 60 deliveries against South Africa in the 2010 World T20 encounter in Gros Islet.