Back to News18
Home » Cricket Home » Photogallery » In Pics, India's Most Glorious Moments in Tests Down Under

In Pics, India's Most Glorious Moments in Tests Down Under 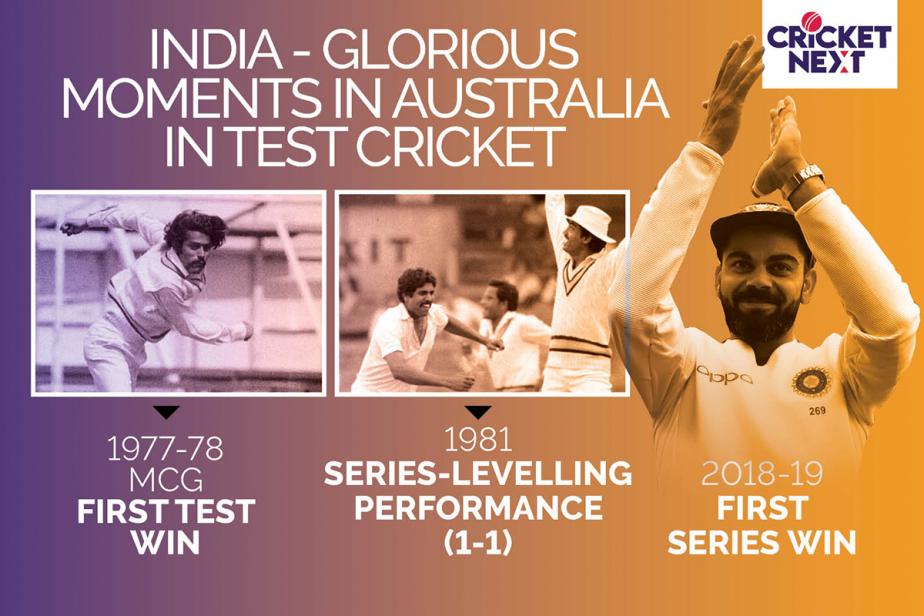 Australia has been one of the most hostile venues for touring teams over the decades - fast and bouncy pitches, big grounds and hostile crowds leave alone a great opposition which prides in winning at home - are some of the factors which make winning Test matches for visiting teams especially from the sub-continent, Down Under a rare event. India have also not had it easy in Australia. They have won just 7 and lost 29 of the 48 Tests they have played Down Under.

Fifties from Amarnath and Viswanath helped India post 256. Bhagwath Chandrasekhar returned with 6-52 in the first innings to dismiss Australia for 213 at the MCG. With a slender lead, Gavaskar, once again, led India's charge with a splendid 118 in the second innings. India ended with 343 setting Australia a daunting 387. Chandrasekhar repeated his performance in the second innings (6-52) and Bedi accounted for 4 as Australia were routed for 164 handing India a memorable 222 run victory - their first Test win on Australian soil.

India were beaten by an innings in Sydney while the Adelaide Test ended in a draw. Viswanath then produced one of the finest hundreds by a visiting batsman in Australia - his 114 was almost half of India's first innings' score of 237. Australia took a massive lead and replied with 419. India's top-order fired in the second innings and they posted 324 in the second innings setting the home team an easy chase of 143. However, a certain Kapil Dev had other plans and returned with 5-28 in 16.4 overs as Australia were bowled out for 83. India won by 59 runs and levelled the three-match series 1-1.

It was a high-scoring series which ended with three draws. India rallied up totals of 520, 445 and 600 in three of the four innings they batted in the series. They came close to beating Australia in the third Test in Sydney - the home team, following on, battled for 77 overs and ended with 119 for 6. Gavaskar was the highest scorer of the series with 352 runs including two hundreds. Kris Srikkanth had an aggregate of 291 runs including a hundred and two fifties but the most interesting feature of his batting was his strike rate of 83.86!

First Test, Adelaide: Cheteshwar Pujara scored a splendid 123 (out of an Indian total of 250) in the first innings. The bowling unit led by Bumrah, Shami and Ashwin ensured that India got a 15-run lead. Pujara again top-scored for India with 71 in the second innings and with contributions from KL Rahul (44) and Ajinkya Rahane (70) helped India to 307. Australia, set 323, ran India close but were bowled out for 291. India had won the series opener for the first time in Australia. Australia levelled the series with a big win at Perth. The third Test at MCG saw Pujara score his second ton of the series and along with contributions from Mayank Agarwal (76), Virat Kohli (82) and Rohit Sharma (63) helped India amass 443 before a declaration. Bumrah then produced a magical spell and returned with 6-33 dismissing Australia for 151. India collapsed in the second innings but their massive first innings' lead still put them in the driver's seat as they set the hosts 399 for victory. Bumrah again picked three wickets and with support from Shami, Ishant and Jadeja bowled out Australia for 261. India won by 137 runs and took a 2-1 lead in the four-match series. Fourth Test was draw.