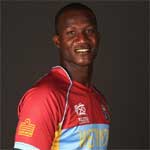 Darren Sammy has already found a place in St. Lucia's folklore after becoming the first international cricketer to emerge from the region and represent West Indies. A big-hitting batsman who can bowl medium pace and extract decent movement, Sammy is a player perfectly suited to the shorter format

Darren Sammy has already found a place in St. Lucia's folklore after becoming the first international cricketer to emerge from the region and represent West Indies. A big-hitting batsman who can bowl medium pace and extract decent movement, Sammy is a player perfectly suited to the shorter formats of the game.

A member of the Under-19 World Cup squad, Sammy spent a good part of the next two years at the Marylebone Cricket Club before being called up to the senior team in the summer of 2004. He made his ODI debut against New Zealand in a rain abandoned game, but just a game later, was dropped. After being left out in the wilderness till 2007, he staged a sensational comeback picking up 8 wickets, which included figures of 7/66 in the second innings, in his debut Test against England in Manchester. Inconsistency in the longest format of the game meant that he struggled to seal a permanent place but was a mainstay in the limited overs internationals.

Sammy's leadership skills were also on show as he led the side against Canada in only his 37th ODI and later in the T20I format. After a good outing in the 2010 World Twenty20, he scored the fastest fifty for West Indies in ODIs. Coming in at No.9, he nearly pulled off a miraculous chase with a 24-ball 58-run innings. He was handed over the captaincy reins in October 2010 after Chris Gayle did not sign a central contract in 2010. With the added pressure of batting and bowling, Sammy led the team to a disappointing World Cup in 2011, but a few months later, he helped West Indies achieve their first Test victory in two years, against Pakistan. More laurels followed, as he led the Caribbean men to their first-ever World Twenty20 title in 2012. The following year, Sammy was bought by Hyderabad for the sixth Indian T20 League season. He was later removed as the ODI captain for the Champions Trophy but retained as Test and T20I skipper.

Test captaincy hasn't been the best for the power-hitter as West Indies have been dominated by every opposition they have played against. T20Is have been the only format in which West Indies have been consistent. After winning the 2012 World T20, they reached to the semi-finals of World T20 in Bangladesh. Captain Sammy has always been impressive with his batting rather than his bowling as the lusty blows once connected, stay hit. Sammy was retained by the Hyderabad franchise when they used the 'Right to Match' card for him at a price of Rs. 3.5 Crores in the seventh season of the Indian T20 League.

Sammy also led West Indies to another victorious World T20 campaign in 2016 when his team beat England at the Eden Gardens. Owing to this win, The Beausejour Cricket Ground in St Lucia was renamed as the Darren Sammy National Cricket Stadium in April 2016.

However, Sammy, who led West Indies to two World T20 titles was informed four months after the 2016 T20 World Cup that he doesn't merit a place in the national squad. The selectors apparently had reviewed his T20 captaincy and arrived at that decision. He was bought by the Mohali franchise in the 2017 Indian T20 League.