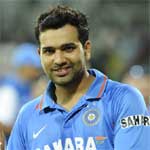 While his exploits in Test cricket leave a lot to be desired, there is no doubting Rohit Sharma’s ability as a batsman. He is the first player in ODI history to have scored three double hundreds, including a world record individual score of 264 against Sri Lanka in 2014, and that tells you

While his exploits in Test cricket leave a lot to be desired, there is no doubting Rohit Sharma’s ability as a batsman. He is the first player in ODI history to have scored three double hundreds, including a world record individual score of 264 against Sri Lanka in 2014, and that tells you what a talent he is.

After evolving as another batsman from the 'maidans' of Mumbai, Rohit had early ODI success when he toured Australia in 2008. In the first final of the Commonwealth Bank Series, he proved to be a perfect foil for the great Sachin Tendulkar as India claimed the match and eventually the best-of-three contest with another win in the next game. Rohit had earlier scored an important fifty in India’s win against South Africa in the 2007 World T20. The team under MS Dhoni had gone on to lift the trophy in the inaugural tournament.

Despite success in limited-overs cricket, Rohit failed to get into the Test team, largely because of huge competition for places. He was even unlucky at one point in time when he injured himself in a practice session of the morning of the Test that he was supposed to make a debut in 2009. As fate would have it, Wriddhiman Saha took his place and Rohit had to wait a long time till he eventually broke through against the West Indies in 2013 in what was Tendulkar’s last international series. Rohit ended up having a whale of a time while batting with hundreds in the first two innings he played as India registered innings victories in two Tests.

The move to open with him in the shorter formats of the game worked wonders for him as well as India. After his impressive performance in the ICC Champions Trophy 2013, runs from his bat continued to flow. In the same year, in a high-scoring ODI series against Australia, Rohit amassed 491 runs in just 6 matches which included his first double-hundred. His innings of 209 came off 158 balls and had a total of 16 sixes.

Rohit was ruled out of cricket due to a finger injury but came back all guns blazing, hitting his second ODI double-hundred, against Sri Lanka on November 13, 2014, in Kolkata. Rohit's 264 runs came in just 173 balls which till date is the highest individual score in ODI history. In the following year, Sharma was the second-highest run-scorer for India in the ODI World Cup. Just when it looked he would cement his place in the Test side after a good short run, another finger injury sidelined him during the New Zealand series at home. Sharma missed most of India's successful home season in 2016.

In yet another comeback to cricket, Rohit led the Mumbai franchise to their third Indian T20 league title in 6 years. In the last month of 2017, Rohit scored his third double century in ODIs, once again against Sri Lanka, and was also the captain of the team at that time. It was a memorable knock for him as it came on his wedding anniversary, a gift that his wife cherished by being the live audience. In the same month, against the same opposition but this time in the Twenty20 format of the game, on December 22, Rohit equalled the world record of scoring the joint-fastest century of 35 balls in T20I.

In 2018, Rohit became the second Indian to score 2000 T20I runs and also became the first player to hit 4 T20I centuries. 2018 turned out to be a fruitful year for him in the Blue jersey of India where he even successfully captained the country in the Asia Cup and the Nidahas Trophy.

Rohit Sharma further proved his credentials as a captain when he led Mumbai to their record fourth trophy in the 2019 season. With the bat, Rohit was unstoppable and emerged as the leading run-scorer of the 2019 ICC Cricket World Cup. He piled on 648 runs in 9 innings and also hammered 5 centuries, a feat never achieved before. Post a dream World Cup, Rohit was selected in the Test squad for the West Indian tour, a format he's yet to boss. Given the chance to open the innings, Rohit excellent in Test cricket as well and formed a strong alliance with Mayank Agarwal at the top.