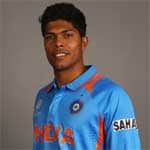 Who doesn't love a story where the hero comes from a humble background, grind himself in the dirt and rise from it? Well, Umesh Yadav has a Bollywood-style fairy tale story himself. Hailing from Nagpur, Yadav's father was a coal mine worker. At one stage, Umesh wanted to become a policeman to hel

Who doesn't love a story where the hero comes from a humble background, grind himself in the dirt and rise from it? Well, Umesh Yadav has a Bollywood-style fairy tale story himself. Hailing from Nagpur, Yadav's father was a coal mine worker. At one stage, Umesh wanted to become a policeman to help out his family but it didn't work out. Then, he held cricket's hand at the age of 19 and things changed forever.

Yadav went to the non-glamourous Vidarbha team to start his journey and started his grind. Gifted with a well-built body, swift, crisp action and natural fast bowling speed, Umesh rose through the ranks. He made his Ranji debut for Vidarbha in 2008, took a 4-fer and finished the season claiming 20 wickets at 14.60.

Just after two years in the domestic circuit, the Indian selectors took notice of his 140+ speed, a rare thing for an Indian bowler, and selected him in the ODI squad for Zimbabwe's tour in 2010. He attracted eyeballs with his pace and Delhi got him for the 2010 season of the Indian T20 League. Soon he made his Test debut as well, in 2011, against Windies at home. The MS Dhoni-led team took him along to Australia in the same year. They lost the Test series but Umesh's bowling impressed everyone. He picked 14 wickets in an otherwise hapless series and proved to be a ray of light through the darkness for the depleted Indian pace bowling unit.

Just when things started to look bright, Yadav got injured in 2012. The selectors gave him time to recover as he was out of the international fold for over a year. Then, he returned and was a part of the ICC Champions Trophy-winning squad in 2013. He was a delight to watch in England as he used the swing and pacy conditions to a great effect but the bouts of inconsistency along with it didn't help his case for a permanent spot in the playing XI.

He is a rhythm bowler, lethal when he finds it and below ordinary when it gets disrupted. Till date, his performance in Australia and New Zealand during the 2015 edition of the World Cup has been his best as he extracted pace and bounce off the Aussie tracks, and though India failed to retain their title, Umesh ended the tour as India's best bowler with 18 wickets.

After a couple of years in the capital city, Kolkata swooped him for the 7th edition of the Indian T20 League. He joined the ranks with Pat Cummins, Morne Morkel and Jacques Kallis under the leadership of Gautam Gambhir. In the 2018 auction, the Bangalore-based franchise, hand-picked him and gave him the reigns of their bowling department.