Maddur: Sometime in 2010, a ten-day-old baby was dragged away by a dog in Gollaradoddi village in Maddur taluk in Mandya, Karnataka. The villagers clearly remember the face of that baby then. A handful of flesh sticking out of the face, body covered in blood. They blame the mother for leaving the newborn unattended. But nobody in the village to date complains about the space where she was left alone — a small temporary shed made of coconut tree leaves, in an open field, built especially for new mothers to keep them outside their village when they are considered "impure". A hut still exists for the same reason.

The child, Varalakshmi GT, is now nine years old and studies in class IV in the government primary school situated inside the village. Her response to any question comes with a big smile that ends where the scar on her face begins. A scar that cuts through her left cheek up to the corner of her eye. She's a differently-abled child whose father died of a stroke last year and those around believe she was severely affected by the dog's attack on her a decade ago. Her mother and her 13-year-old brother take extra care of her now.

But this incident changed nothing for the women in the village. The residents religiously continue to ostracise new mothers for two months after they give birth. The practice is prevalent in dozens of Gollarahattis (hamlet of Gollas or Kadugollas) across the state. Gollaradoddi is one of two such villages in Maddur taluk and one of the 14 in Mandya district. The rest are spread mostly across Tumkur and Chitradurga districts.

This isn't the only time women are ostracised. A couple of years down the line, Varalakshmi would be asked to stay in a room outside the village for twenty days when she first menstruates and for four days every time she has her periods thereafter.

The room is a partially broken concrete structure with roofing tiles made of clay, with no toilet or a tap connection for a hundred metres around this room. And during the period, the girls aren't allowed to enter the village where these basic facilities are. When nature calls, they must use the open field behind. School and college-going girls must take a shower outside the room in the open before they leave every morning. Anyone who touches the residents of the room while they give water or food must take a shower "to purify" themselves before they enter the village. "Our God doesn't like it. Menstruating women and new mothers must stay out. They need to follow the system. Who would want to live like this in this age and time? It is our fear in God that makes us follow these. We must continue. That fear in God must be there," says Bhagyamma as she stands near a shed made for her daughter Sangeeta GR.

Sangeeta gave birth on February 6 and has been living in the hut since then. Except, she lives alone. Her baby died six days later on February 12 at the taluk hospital.

"The baby was fine. But suddenly something went wrong and there were fits-like symptoms. The doctor said there was a problem with the baby's heart and kidneys. I returned to the village without the baby. I am hurt. I really don't know why it happened," she says. Sangeeta does not know why the god she and her villagers fear and believe in would be cruel to her. Nevertheless, she would stay in the hut to complete the two months.

Her mother would stay in a similar shed, that is about 4 feet high, 8 feet long and 5 feet wide. But this hut would be at a distance of about 2-3 metres as the new mothers or their hut wouldn't be touched.

"You cannot enter the village if you touch her or even the hut. You must take a shower after. Usually, we bathe the baby, we give her food and water and once all the work is done, we take a shower. These are the rules," Bhagyamma explains.

"We are far better. Earlier and in some places even today, they don't even provide water and food directly. They don't touch at all. They keep it on the floor and move away. We even go with the mother and baby to the hospital with a bottle of water for them," she added.

A few metres away from this one is another hut where 20-year-old Poornima is nursing her month-old baby. There is a cradle and a mosquito net inside the hut along with bedsheets and a pillow. She was married to her maternal uncle Shashikumar who could visit their child too, but rules apply to men as well. And once you have been to one hut of a mother and baby, you wouldn't be allowed to go to another without taking a shower as the period for staying out of the village would differ from one mother to another based on when the child was born. Two months and three days from the day of birth.

According to the villagers, if Poornima or her hut is touched after one has touched Sangeeta's then Poornima's stay would extend by two days as Sangeeta's child was born two days after Poornima's. 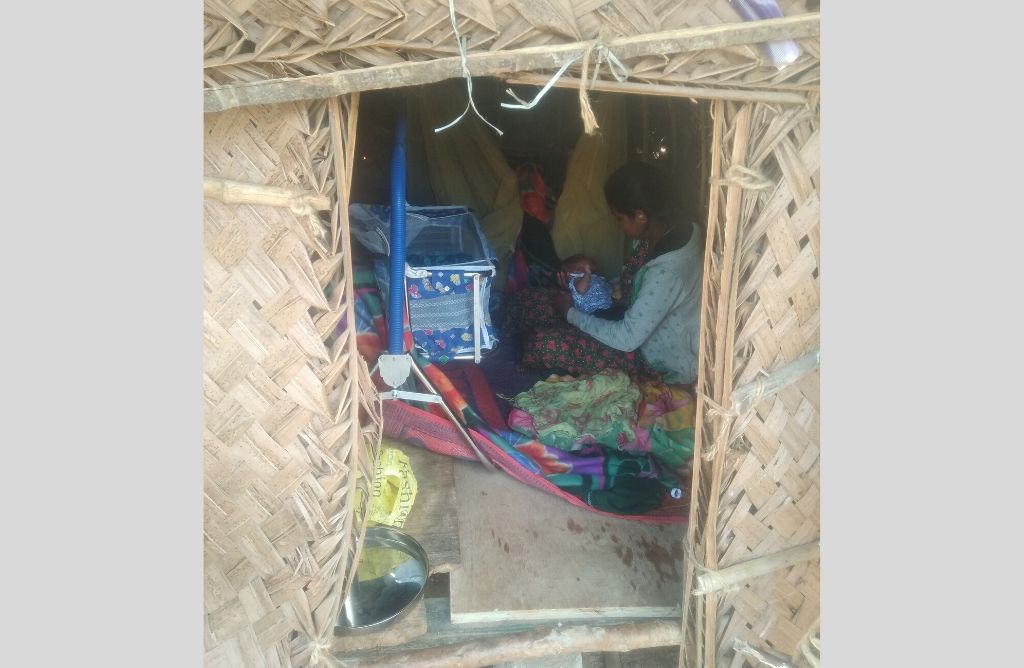 Poornima with her one-month-old child inside the hut made especially for her to stay out of the village for the two month period after childbirth. (Photo: Revathi Rajeevan)

This Gollaradoddi in Mallinakuppe village like most other Gollarahattis houses only those from the Kadugolla caste Gollaradoddi — traditionally shepherds. Some of the men leave the village with their goats and sheep and return when the monsoon falls. This village houses 305 people in 70 families out of which 142 are female. The houses are built around the village shrine, Junjappa temple, where Hindu god Krishna is the deity.

"We have arivu karyakrama (awareness programmes) for them. Some don't attend it and we go door to door to bring them. We ask the younger girls who explain in detail the kind of trouble they have with the beliefs. We also warn the villagers not to scold the girls for speaking up. But at the end of the day, they all choose to continue the practice because of fear. When we tell them why it is wrong to make women stay in such conditions, they ask the government for better facilities," says Srinivas M, panchayat development officer.

But the officials are aware that bettering facilities would mean giving official sanction to such discrimination. And refusing to provide better facilities would mean women living in deplorable conditions. At such awareness programmes, the seniors agree to let go off the practices but tell the women that they must face the consequences if they decided to leave behind these customs. Tales of troubles from neighbouring villages add to their fear, including the men. The Gollas would be called "ketta gollaru" (bad Gollas) and other Gollas would not marry their girls, they worry. The Karnataka anti-superstition bill which bans such practices came into effect this January but not in these villages.

"A woman, a new mother, in the neighbouring village entered her home, stayed home. They — those who took her home and the woman who agreed to enter home — had troubles for two-three years. They came here, prayed at this temple and promised to follow the system. Their problems were solved. Those in the neighbouring village come to this temple to get their problems solved. If we break our practices, the god's strength will reduce," says 58-year-old Siddaiah, a villager.

"It is the fear of God that exists since our grandfather's time. The women say they don't have any trouble. They have been following it and that God will protect them. We feel such practices shouldn't continue but the girls say they don't have any problems. I individually cannot change anything," says Nagaraj GB, another villager.

"Individually even if I feel against it and take the women home, if something goes wrong, we will be isolated. You cant live like that in a village," he added.

Women who marry men from the village are told clearly what they must follow.

29-year-old Manjula M married a man in the village a year ago. Manjula is a Golla too, but rules back home aren't as stringent. 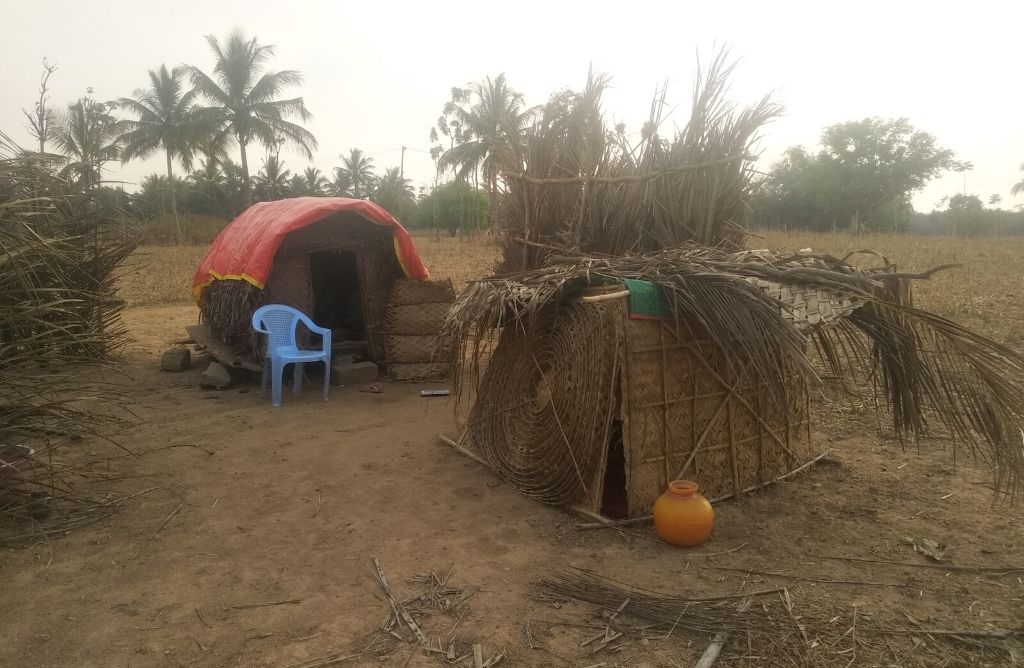 "Every month when it's time to stay out of the village, I go home in Gubbi, some 85 kilometres away. It is not easy but what to do?" she says.

The villagers are aware the practice isn't legally acceptable but are scared of a change.

"Things won't change overnight. We have followed this since forever. Now if we change, will God accept?" asks Giriyamma, an elderly woman in the village.

"We can't do anything. We can't change rules. Even leaders of the community can't. If government comes and changes this and if something happens to us, is government going to look into this? God should save us. God has to listen to our woes," she added.

Giriyamma is well aware that not everyone follows the practice. She and several other women even warn outsiders against breaking their rules. But in spite of the warning, if anyone violates the rule, then God's anger would be on the violator, they explain.

However, the most troubled lot are visibly the youngsters who go out to study. Many stay in hostels away from the village where following such practices is impossible. The rest, a dozen of them who cycle to a college about two kilometres away seem embarrassed, and often lie to stay away from the practice.

"We don't tell our parents when we have our periods. They know we aren't telling them or lying but they don't ask. They let it be. We are nor scared. Actually nobody follows it. In some houses, they are very strict and some villages don't follow it. Some just stay indoors. Nobody asks us. People around might talk behind our backs, that's it," says Sharadha GD*, a BA student.

Sharadha followed the practice for one year when she was in class IX, after which she stopped telling others when she was on her periods.

"Our parents' generation follows it. It is not that we don't believe in God. We thought 'why should we go'. It is difficult to go to college from here. It was troubling. We have to take bath outside, in the open. Everyone can see us. We have to get water from elsewhere. We just pour water on our heads with our clothes on and then go in and change and by the time we get to college we are late too," says Pavithra GP*, another student from the village. The area where the mother and baby take a bath. (Photo: Revathi Rajeevan)

"When we were in our second year PU (pre-university) our political science teacher scolded us saying in spite of being so educated, we follow all this. Then to the class, he said, 'no point in telling these people; whatever you do, it's useless. They are still following it'. That's when we thought, why should we follow all this and get scolded like this," she added.

Both want to be teachers but neither of them want to be one in the village because staying in there would mean being forced to follow the practices.

"When we marry, we must marry someone from the community. That means in addition to staying in this room now every month, we have to stay there for two months (after delivery) too. We don't want that," they say.

Produced by — Fazil Khan
Lead Illustration — Alankar Vishal
More News18 Immersives
In The Line of Fire: Why Kashmiri Youth Troop to Encounter Sites
Teddy Bear, Teddy Bear, Listen To My Cries
Passport To Kill: How NRC Anxiety is Pushing People Over the Brink