The Hyundai Creta has received a facelift for 2018 and is back with a host of new features and design changes too. But does that make it a better value for money offer? We find out in this review.

The Hyundai Creta is arguably one of the most popular cars on the Indian roads and now, it has been given a facelift. We take it out for a drive to see what the changes are and whether it makes a better case for your money.

Let’s get to the changes on the outside of the new Creta. Starting off from the front, it has received the Cascading grille design which not only brings it in line with the global Hyundai design language but also, thanks to being wider and a lot bolder, it gives the car a distinct look. The grille connects to the headlamps through the chrome encasing and looks neat. The other big change is in the form of the new fog lamp housing which now also holds the LED Daytime running lights. This, coupled with the updated front bumper which gets the brushed silver skid plate, gives the car a bit more of a premium look at the front. From the sides, though, the profile and the overall dimensions of the car remains the same and hence the car does not look that different. The wheels, though, have been given a new look. 2018 Hyundai Creta Facelift retains the silhouette that it is known for. (Photo: Siddharth Safaya/News18.com)

Coming to the back, the evident change is in the form of the new bumper which has a lot more cladding than before and with the skid plate, it does look better. The tail lights have been given a minor tweak as well, but you will really have to look for it in order to notice it. Overall, the new Creta builds on its chiselled muscular appearance and is still one of the better-looking cars in the segment. We, however, were left wanting a bit more, like an LED tail lamp or perhaps a slightly tweaked headlamp cluster to make it look fresher. But as it stands, there are no complaints. 2018 Hyundai Creta Facelift from the back. (Photo: Siddharth Safaya/News18.com)

So yes, these were the changes on the outside but there are some new features on the inside as well. Prime amongst which has to be the sunroof. Something that a lot of people have asked for. 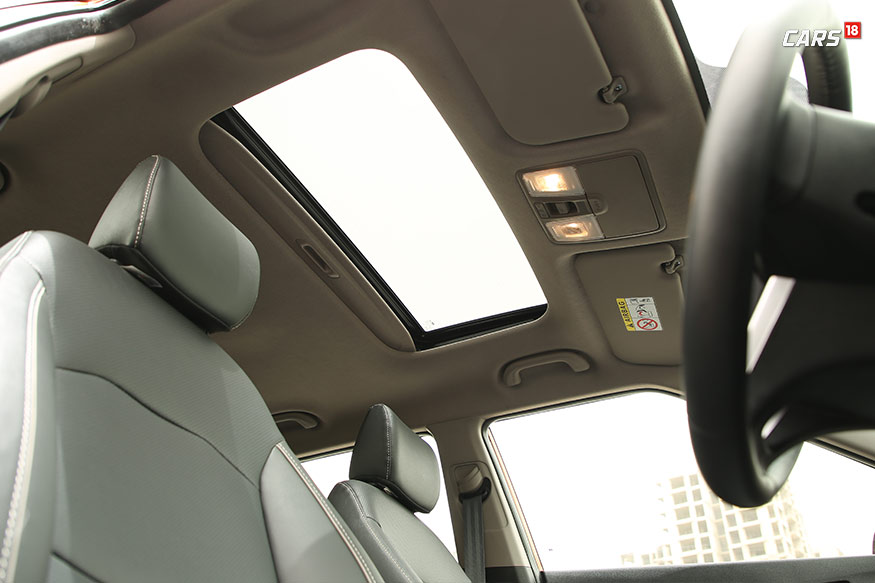 And thankfully, the sunroof is electrically operated. The other changes on the inside are not so evident right away and that’s because the layout and the design of the dashboard is almost identical to the pre-facelift model. But, look closer, and you will notice that there is a new wireless charging pad on offer and if your phone supports it, it is a great addition. The driver seat, in the top variant, is now 6-way adjustable and that too electrically and that is just fantastic. And there’s a new sliding armrest as well.

In terms of safety, the Creta offers dual airbags and ABS as standard and the seatbelts now come with pre-tensioners on them. Hyundai has also given the Creta speed-sensing door locks as well as Cruise control. But that’s not necessarily a bad thing, because you see, the Creta was always good on driving dynamics and it still is. The steering wheel is well weighted and the driving feedback on the car is a confidence-inducing one. The suspension setup is bang on when it comes to city driving and the engine can sit comfortably at highway speeds for as long as you want. Then, there are the usual goodies such as a push-button start, rear AC vents and that fantastic touchscreen infotainment system that supports Android Auto as well as Apple CarPlay. Really then, the new Creta facelift is a case of why fix something, if it’s not broken?

To wrap it up, the Hyundai Creta was always a good car and thanks to the new features and the styling updates that the car gets, it has just become a better value for money offering than before. So, if you are about to spend your money, this one remains to be as one of the safest bets out there right now.