Mahindra will launch its new facelifted global-standard SUV on April 18.

Mahindra is all set to launch the facelifted XUV500 SUV in India on April 18 and company has recently teased the car in it’s latest twitter post. The company has revealed any detail about the SUV yet but the new XUV500 has already been spotted in Indian roads completely undisguised. Engine specification of the car has also been leaked as the launch date appears near.

In terms of looks, the front end of the facelifted XUV500 features a new chrome grille with a mesh design. There’s a large chrome strip around the grille, and the top part of the strip is flanked by new twin-pod headlamps with projectors and LED DRLs. The bottom of the strip splits the air dam in two. The fog lamps are retained from the current-gen model and are placed below the headlamps, with a vertical chrome strip and L-Shaped design. The rear section of the XUV500 facelift features a new tailgate design and tail lamp clusters. Triangular shaped tail lights have replaced the vertically stacked taillights, while the reflectors are placed lower down. The bumper is also redesigned, as evident beneath the cover, while the tail-gate also gets a new chrome number plate garnish. Other details include a roof spoiler with an integrated high-mount stop light. 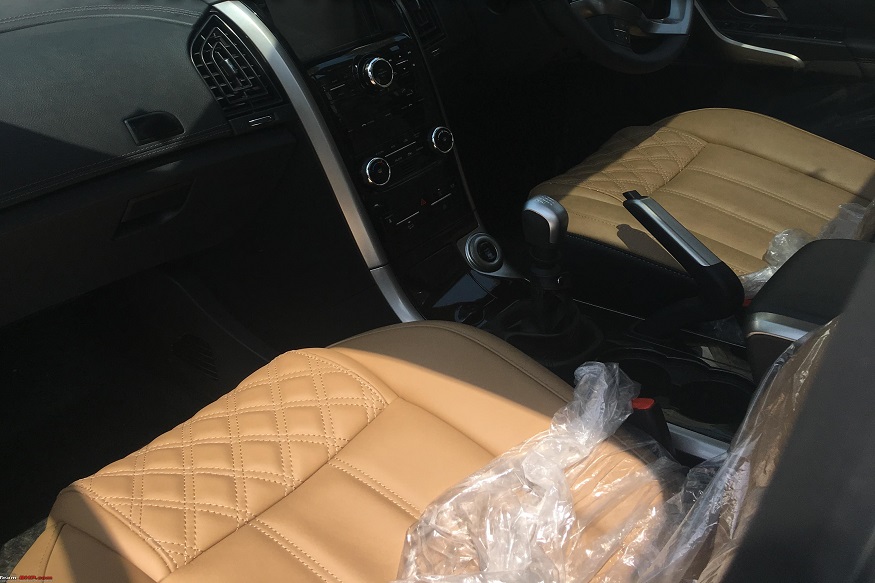 As per the spy images, inside the cabin, the new XUV500 will get tan coloured leather seats with diamond stitching. The all-black dashboard is covered with leather, with silver trim on the centre console. There’s also a piano black fascia in place of a matte black finish on the centre console. Rest of the cabin looks identical to the current XUV500, along with the twin-pod instrument cluster. Additional silver trim is added to the gear knob, center armrest, hand brake lever and steering wheel. There are reports that the XUV500 will get an updated touchscreen infotainment system, although it looks the same in design.