With the Mahindra XUV500 Facelift's launch, there is now a new option available for buyers who are looking for a car that is powerful and can carry a family in comfort. Tata Hexa too has been a well sought after car in this segment.

Following is a comparison of the two cars based on specifications and the features they offer: The Tata Hexa has visual similarities to the Tata Aria. That’s because the car is built on the same platform and has received the new ‘Impact’ styling. The honeycomb grill is accentuated by the chrome strip running under it. The Daytime Running Lights (DRLs) are cleverly integrated with the fog lamps and the flared wheel arches with smoked projector headlamps give the car a strong stance. The Hexa gets ample cladding all around with sharper lines and chrome, giving it a more SUV-like feel as compared to an MPV.

Interestingly, the Hexa’s wheelbase is identical to the Aria but the car on a whole is longer, taller and wider. The rear end of the car has a large chrome strip which continues all the way to the outside rear view mirrors. The wrap around tail lamps has an OLED strip, giving the car a premium appearance. Powering the base trim Hexa is the 2.2-litre Varicor engine, which delivers 150 PS of power and 360 Nm of torque. It is paired to a five-speed manual. The other upper variants - XM and XT - come with a slightly more powerful 2.2-litre 156hp 400Nm Varicor400 diesel engine. This engine gets six-speed manual as well as automatic gearboxes. Inside the cabin, the new XUV500 gets tan coloured leather seats with diamond stitching. The all-black dashboard is covered with leather, with silver trim on the centre console. There’s also a piano black fascia in place of a matte black finish on the centre console. The rest of the cabin looks identical to the current XUV500, along with the twin-pod instrument cluster. 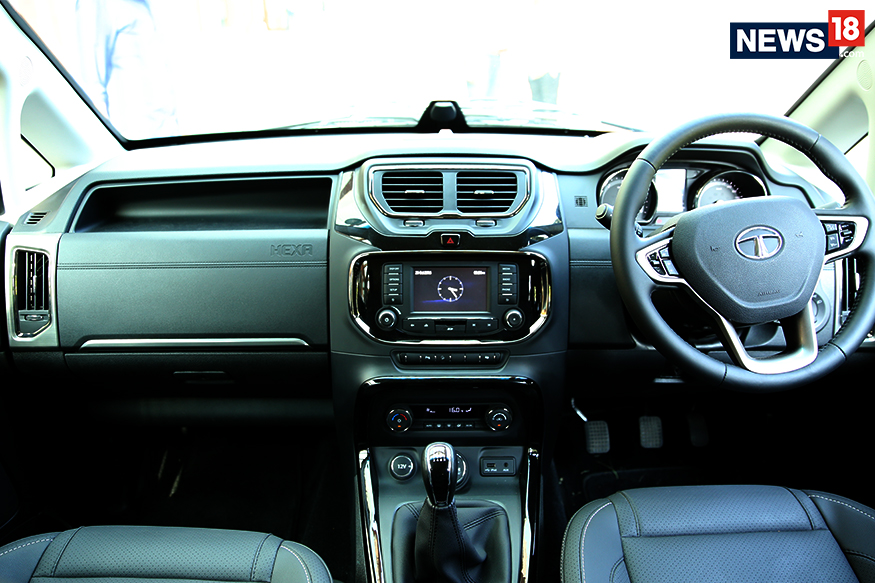 The Hexa has a seven-seat layout as well as a six-seat configuration. The car has automatic climate control, ConnectNext infotainment system with touchscreen along with 10-speaker JBL sound system and an eight-way adjustable driver’s seat. It also offers conveniences like – a chill compartment storage sitting above the glovebox, steering-mounted controls for audio, telephony and cruise control and a total of 29 compartment spaces. There’s also customisable mood lighting that changes according to the drive mode selected.