The drawings show an SUV featuring an aggressive front end with a very modern split headlight design, which is along similar lines to the smaller, recently introduced Kona, and a neat, pinched rear end with an angled tailgate.

It was confirmed over the last couple of weeks that an all-new Hyundai Santa Fe would be making its debut at the upcoming Geneva Motor Show in March. But anyone who thought it might be a relatively mild redesign on the current theme will probably be pleased to see the renderings Hyundai has just released of the new Santa Fe. To say this is a radically different approach for the fourth-generation is something of an understatement, as long as it does eventually go into production looking close to the latest images, of course.

The drawings show an SUV featuring an aggressive front end with a very modern split headlight design, which is along similar lines to the smaller, recently introduced Kona, and a neat, pinched rear end with an angled tailgate. If the Kona and this new Santa Fe are examples of what Hyundai is going to be serving up in the next year or two, the automaker's relative sales slump in markets like the US in 2017 could well be put firmly into reverse. 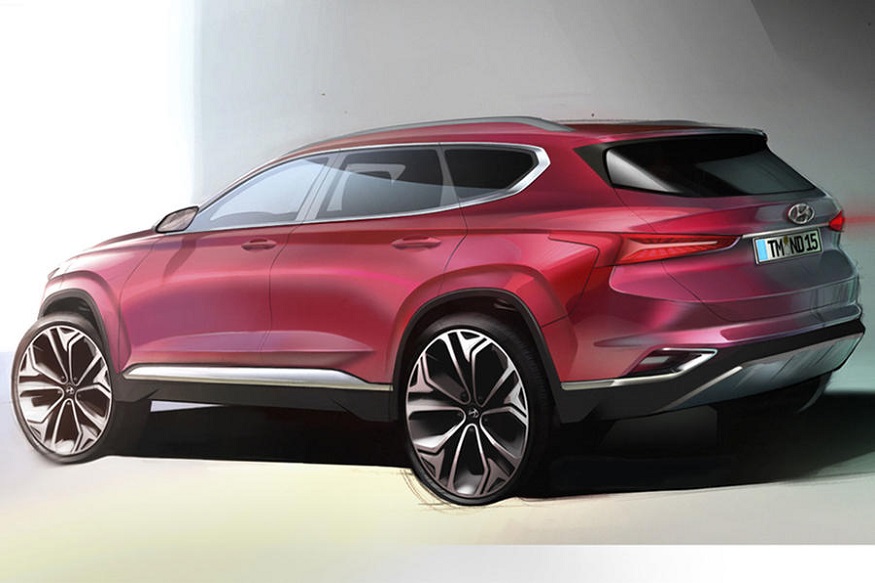 As the Santa Fe SUV is the largest model Hyundai currently sells, it's important to retain a family-friendly focus with the new model. That's why there will be a number of technological enhancements for the fourth-generation, which will include a rear occupant alert that issues a warning to let the driver know if there's someone in the rear seats when leaving the car. There will also be the inevitable features derived from autonomous vehicle development, such as automatic emergency braking added to the rear cross-traffic alert system, which will effectively be giving the new Santa Fe the feature in both forward and reverse.

Hyundai at least part-develops all its vehicles now at the famed Nurburgring in Germany, which is to sharpen and hone their handling, regardless of their performance credentials.

Klaus Köster, Hyundai's director of high-performance vehicles explains, "It would be very nice if in 10 to 15 years we can have people on the street seeing Hyundai as a brand that makes cars that are fun to drive. We have already established ourselves as a reliable, quality car maker that makes cars with good designs. But now we have the knowledge to add sportiness to that image – which is something us Europeans like."

How sporty the fourth-generation Santa Fe turns out to remain to be seen, but if it goes as well as these images look it will definitely be a big departure from the current model.