The Hyundai Tucson has been updated to BS-VI emission norm standards and with that, it has got itself some design changes and lots of new features.

You see, the year 2020 wasn’t all that bad right from the moment it came around because earlier in February we had the Auto Expo. It was there where Hyundai had showcased the Tucson facelift and it was originally supposed to be launched in the month of March. And well, we all know how the world went since that month came around. Nevertheless, we have the car with us now so it’s time to take a closer look at what it has to offer.

Let’s start with the changes on the outside.

The new Tucson gets a larger, bolder chrome-finished grille which is flanked by updated LED headlamps. The front bumper has been redesigned as well and the same set of changes have been made to the back as the LED taillights as well as the rear bumper has been updated too, along with the addition of some chrome on the exhaust tips. You also have new 18-inch wheels and that’s about all the changes it gets on the outside.

The feeling of having new things is actually a lot more when you step inside the Tucson because it is here where the big change is evident as you get an all-new dash in front of you. The reason for that is because now it has to accommodate the latest generation 8-inch touchscreen infotainment system which sits on top and everything else has been designed around it. So now, you get horizontally laid-out AC vents. The cabin feels premium and it looks smart because the build quality is nice and the quality of materials used is nice as well. You’ve got soft-touch materials almost everywhere, like on the steering wheel, the gear knob, on top of the dash, on top of the doors – it’s a good feeling cabin.

You also get things like a wireless charging pad, a digital instrument cluster and lots of buttons on the steering wheel. And speaking of buttons, all of them feel tactile and that makes them really nice to use. Also, talking about feeling nice, well, if you were to open the large electric panoramic sunroof, you will appreciate the fact that it actually opens up quite fast. And you have a lot of compartment spaces all around you too. You get the idea, it is these little things that add up to giving you a premium feeling inside the Hyundai Tucson.

Additionally, Hyundai has now introduced the Blue Link connectivity system which brings a host of connected features to the Tucson. 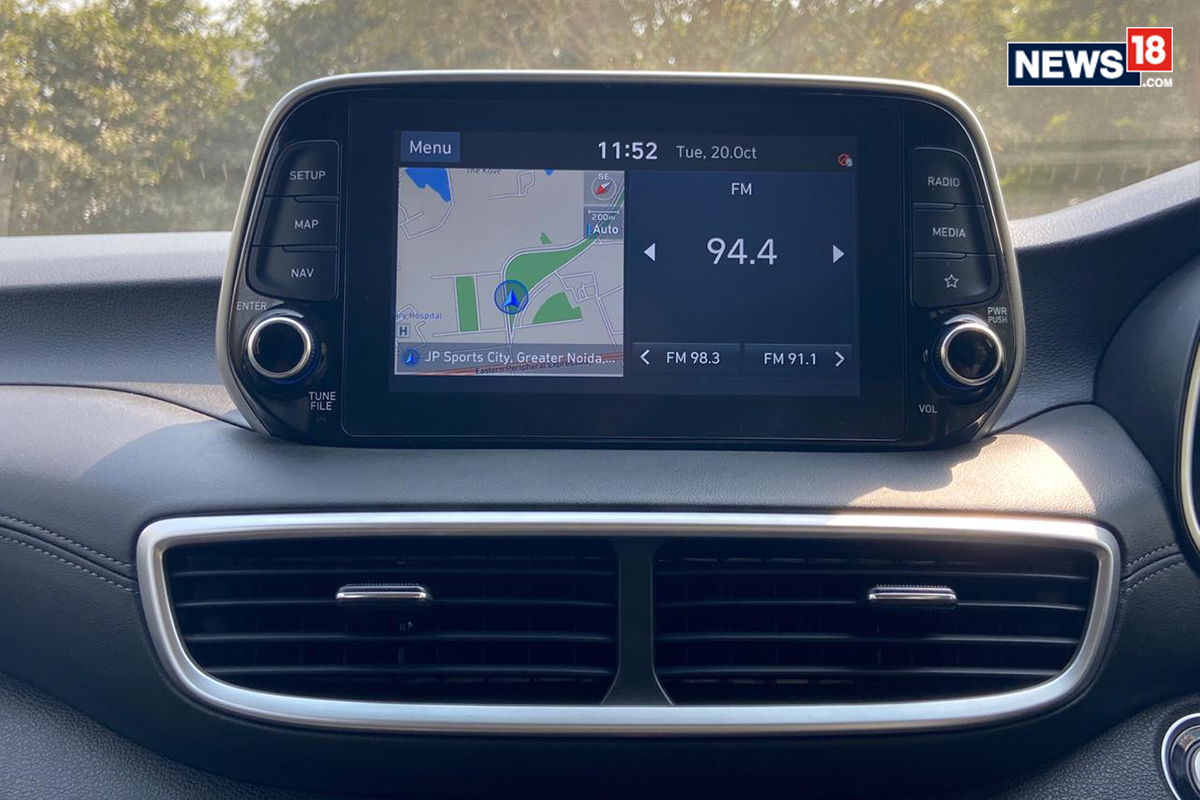 Other than that the Tucson also gets cruise control, automatic headlamps and now, both the driver as well as the front passenger seats are electrically adjustable. In terms of space, there’s a lot of it for all passengers with more than enough knee room and headroom even for tall occupants. Those who sit at the back will also get adjustable headrests, a charging port and rear ac vents for themselves. And Last but not least, the boot space is big too and the tailgate is electrically operated.

But now let’s get to the big change which is the BS-VI compliant engines. It now comes with the option of a 152 horsepower 2.0-litre petrol engine that is offered with a 6-speed automatic or the other option which was the one that we drove. This is a 2.0-litre, 4-cylinder diesel engine that makes 185 PS of power and a massive 400 Nm of torque and this engine is coming with a new 8-speed automatic gearbox. In terms of the driving experience, Tucson has a very nice chassis setup which gives it fantastic highway abilities. It soaks up all the bumps and undulations with ease and makes for a comfortable ride. In city roads, however, you do feel the suspension has been softened up a tad bit too much for it to go over potholes and stuff, but you really notice when you are looking for it. With more passengers and luggage, the Tucson will actually drive better.

The highlight, of course, is the engine which has linear power delivery and as is the case with Hyundais in general, this too is very well refined. The gearbox gets the gears right and putting the car into the Sport mode, will solve your need for quicker gearshifts. Also, being an 8-speed unit, you can leave the car in higher gear and cruise with ease. To sum up my experience of the Hyundai Tucson, well, it was a short day’s worth of driving the car but I can say for sure that its biggest USP is the way it drives. It does not give you that conventional feeling of being inside an overly beefed up SUV that rises above all the other cars that are there on the road. But if you look past that, you will find that this is a smart-looking, proportionate SUV with oodles of space, performance and practicality. So, if you are not into that off-roading lifestyle and just want a big luxurious SUV for yourself, you should definitely give the Hyundai Tucson a second look.