The 2020 TVS Apache RR 310 has been ridden on the race track where it not only showed that its a better performing machine, but a better motorcycle as a whole.

One of the things that have differentiated TVS Motorcycles with other brands in the case of the TVS Apache RR 310 has been the fact that they have been actively listening to the feedback coming from their customers and rolling out the updates on the motorcycle. In just over a year of its launch, TVS rolled out an update that worked towards reducing vibrations on the motorcycle and added a slipper clutch too. And now that it had to be updated to meet the mandatory BS-VI emission norm, they took the opportunity to further fine-tune the RR. The result is the 2020 Apache RR 310 that we got to ride at the Madras Motor Race Track for quite a handful of laps and that showcased a new, much mature side of the machine.

But before we get there, let’s first talk about what’s new in this update. Right off the bat, the first thing you would notice is that there has been no update whatsoever in the styling department. There is a new black colour option, though, and the keen-eyed amongst you would have seen that the wind deflector now has screws built into it and that’s because it can now be removed so that it can be cleaned properly and it also helps in reducing the vibrations coming off of it. 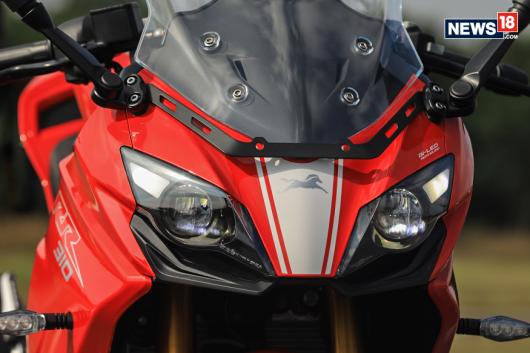 But the easier way to spot the new RR 310 would be to take a look at the instrument cluster. It is now a 5-inch TFT colour display that not only looks great but is a lot easier to read as well. It is basically right on par with the display on the KTM 390 Duke but only better given the host of information that it provides which only gets more impressive when paired to the TVS’ smartphone app.

And since the 2020 RR 310 gets a ride-by-wire system, it has allowed TVS to tune in four riding modes – Track, Sport, Urban and Rain. These modes can be set through the handlebar-mounted controls which feel well-built and premium. And even more impressively, all the four riding modes have their own unique interface on the instrument cluster that prioritise the information that you would want to know first in the riding scenario that these modes are meant to be used in. you can also customize the widgets that you want in the specific riding mode and turn off the details you are not interested in too. The only other motorcycle’s infotainment system that offers such level of customisation is the Triumph Street Triple RS and one glance at the price of that motorcycle is enough to make you realise just how big of an achievement this system by TVS is.

As for the modes, they change the power available from the engine, the throttle sensitivity and the level of ABS-intrusion to suit the self-descriptive riding mode. 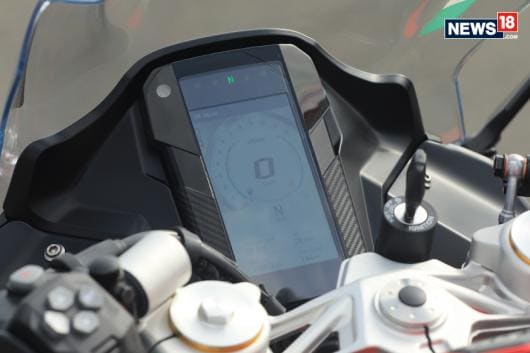 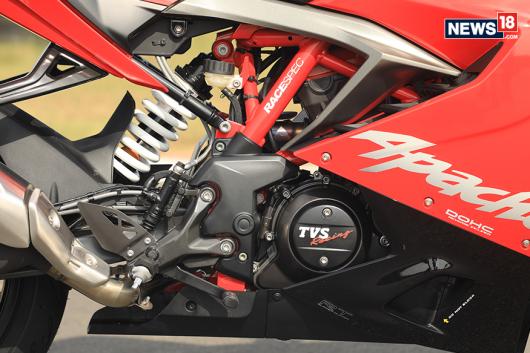 But all of this is what the motorcycle is like on paper, where this Apache really shines through is when it comes to life. Right from the moment that you start the motorcycle, you can feel that there is something different. The engine feels like it breathes a lot better and as a result, it sounds a lot calmer too. What’s impressive is how the updated RR has dealt with the vibrations. It’s not completely absent as there is still some of it that can be felt through the seat at higher RPMs but now you can live with it is good enough to be overlooked after a bit of time on the saddle. 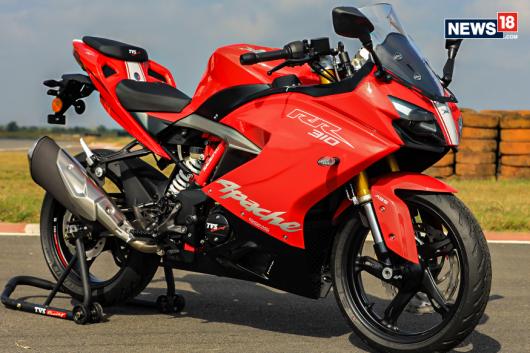 TVS have also worked on several tidbits inside that fairing to reduce vibrations and it shows. But hands down, the biggest improvement has been in the handling department and that’s mainly due to the new Michelin Road 5 tyres that TVS is offering with this 2020 model. And like I said when you combine all of this, the RR 310 rides unlike ever before. So much so, that you won’t even realise that in order to meet the new emission norm, the RR has actually gained about 4 kilos of weight. 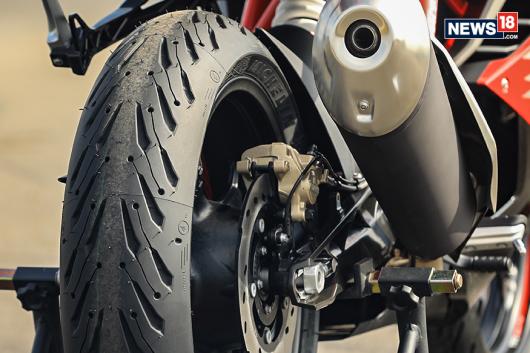 It now feels a lot calmer even when you strangle its neck while being greedy for more power. Being more refined than before and having a fantastic set of rubber on it, this TVS turns in way more eagerly than it used to. And once leaned over, you get a lot more feedback coming from the tyres and you have more than ample grip even when you are carrying high leans, which in turn, gives confidence to the rider to push harder and harder. And that’s when the chassis and the suspension setup come into the picture as they make the motorcycle feel compliant and planted.

It now, overall, feels better to ride as a whole. It stops better as your braking distance has gone down due to the new tyres, it turns better, and it pulls out of the corner harder than before as well. If there is only one thing that I could change with this update would be to have the choice of being able to turn the ABS off completely in Track mode as under really hard braking, it feels intrusive sometimes. But the highlight has to be the fact that not only is the 2020 RR 310 faster but it is also more forgiving, and that is what makes it a great recommendation for those who like a spirited riding experience in a good all-round package that can be used in a variety of conditions.

In order to understand what this brings to the table, we also need to consider the older RR 310. Up until now, this was a brilliant motorcycle to tour on and it continues to be so. Thanks to the new infotainment system that can show things like turn-by-turn navigation, it makes for an even better package. However, the biggest improvement has been in the performance department as this is a lot more capable and also a lot friendlier than before. The thing is, the update is not quantifiable as the update is about the much lovely feeling that this motorcycle invokes. It makes you want to take it out for long rides, it eggs you on to go faster on a race track and will leave you smiling with a rewarding experience whenever you hit that apex. It simply makes you want to ride more and make you think about it when you are not, and that in my books is a big win.